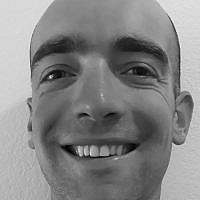 The Blogs
Scott Dragland
Apply for a Blog
Please note that the posts on The Blogs are contributed by third parties. The opinions, facts and any media content in them are presented solely by the authors, and neither The Times of Israel nor its partners assume any responsibility for them. Please contact us in case of abuse. In case of abuse,
Report this post.

There is an ongoing phenomenon that poses a serious threat to Israel’s future ability to sustain life. It kills grasses and the wildlife that depend on them. It strips the soil of plant cover, leaving the soil exposed to sun and wind. It oxidizes the soils’ organic matter, devastates the microbial communities essential to soil health, and destroys the soils’ ability to infiltrate and retain water. As a result droughts become more frequent, and more deadly. The phenomenon of which I speak is desertification.

Desertification means the process by which living grassland dies and turns into desert. Although this process has been going on for a long time, it is poorly understood. We assume that deserts such as the Negev are “natural.” Nothing could be further from the truth. The book of Genesis, written over three thousand years ago, records that Abraham’s nephew, Lot, took his flocks to the Cities of the Plain at the southern edge of the Dead Sea, because the best grazing was there. Even if you don’t lend credibility to this story, consider the rock paintings and skeletons of elephants, rhinos, and giraffes that have been found in the Sahara. It is self-evident that this part of the world was a rich, thriving grassland only a few thousand years ago.

These grasslands flourished in the presence of large herds of ruminants that served four important functions. A) They regularly consumed old plant material, which kept plants healthy and growing. B) They armored the soil surface with plant litter, which enabled the soil to retain moisture. C) They fertilized plants with their dung and urine. D) They bunched together for fear of pack-hunting predators, and kept moving on to find fresh pasture, which gave the grass a recovery period. Ruminants and grasses evolved with each other over eons, and depended on each other for survival. Over time, domestic ruminants came alongside wild ruminants, but this made no difference to the grasses so long as the domestic herds were bunched and moving, just like their wild ancestors.

For a variety of historical reasons, the nomadic cowboys of antiquity disappeared from the Negev, and their herds disappeared with them. In the absence of the grazing, trampling, fertilizing, and moving herds, the grasses, which rely on these ruminant functions to stay healthy, began to die. As evapotranspiration (water vapor being released from leaves) ceased, the air lost its humidity, rainfall decreased, more grass died, and more ruminants died. This vicious cycle created the moonscape Negev which now constitutes 55% of Israel’s landmass.

Can anything be done to halt this process, or even reverse it? The answer is a hopeful, emphatic Yes. About four decades ago, an ecologist named Allan Savory began to explore how to manage livestock in harmony with nature by imitating the behavior of the wild herds on the Serengeti. The ranchers in South Africa and Zimbabwe who implemented these ideas proved that it is possible to heal the poorest land with nature-mimicking grazing management and vigorous, hardy cattle. Their methods have been successfully reproduced in multiple countries throughout the world, and I hope that Israel will be added to this list.

Israeli ranchers can reverse desertification and restore the Negev to grassland with astonishing speed, if a few conditions are met:

Through ingenuity and an indomitable spirit, Jewish pioneers have restored the agricultural productivity of large parts of the country, but this work is nowhere near finished. Imagine the possibilities if the Negev is restored to grassland. From an environmental standpoint, it will provide habitat and forage for countless wildlife species, and convert millions of tons of atmospheric carbon into plant material that can be safely stored in the ground as soil organic matter. From an economic standpoint, it will enable Israel to populate and develop its southern half. Rather than say “it can’t be done,” let us do whatever it takes to see it done, and fulfill the words of Isaiah speaking of the Jews’ return to their homeland: “The wilderness and the solitary place shall be glad for them; and the desert shall rejoice, and blossom as the rose.”

About the Author
Scott Dragland is committed to healing grassland through the holistic management of ruminants. An Army veteran, he is embarking on a second career in regenerative agriculture.
Related Topics
Related Posts
Comments