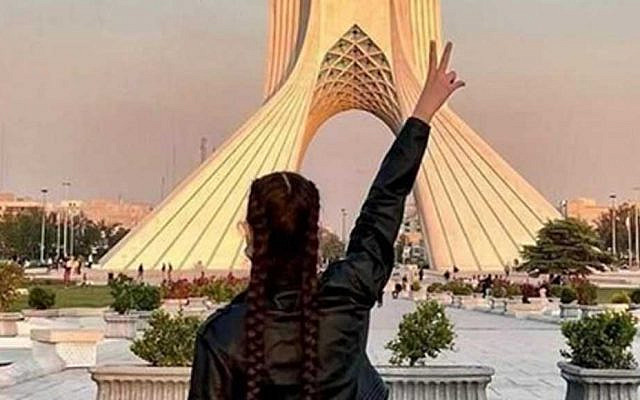 The Khomeinist regime in Iran and the Putin regime in Russia rival each other as human rights violators, and the western world has been satisfied with issuing toothless statements and “constructive criticism” in confronting them. Since Russia’s aggression against Ukraine, however, Putin has had to face a much stronger backlash. This exact stance should be adopted by the West, where Khomeinist leaders are concerned.

The Khomeinist Regime, which has now come to be known as the “child-killer”, has managed to slaughter hundreds of adolescents, teenagers, and children since the end of September. They have arrested thousands of citizens, holding them hostage in their dungeons. There is no news about their fate; the only information available is about those who are arrested. They just broadcast news of the execution of Iranian youths, announcing that they have been or are about to be hanged.

In the face of the atrocities committed by this medieval regime that is neither Iranian nor knows humanity, the international community has done nothing but issue warnings and has always avoided taking practical measures, and without any care for the denial of Western values, it has continued profit-oriented relations with these criminals without borders.

Although late, the western world has now finally heard the voice of the Iranian nation, and it can be taken as a good omen. The creation of the fact-finding committee of the Human Rights Organization, which got a majority vote because of overt executions carried out by Mullahs during recent protests in Iran.

In addition, the military cooperation of the Khomeinist Regime with Putin in Ukraine has caused Westerners, especially Europeans, to cease their continued patronage of the Khomeinist regime leaders and officially stand by the people this time.  By highlighting the issue of human rights, they kick off a new policy that addresses Tehran’s crimes against humanity.

The mechanism of the UN fact-finding committee, with the continuous presence of people in the streets, in addition, in the short term and in a staggered fashion, cutting off ties between the European Union and Tehran by closing embassies and recalling the ambassadors of European countries from Tehran. And in the long term, documenting the Khomeinist Regime’s crimes will ultimately lead to the trial of the perpetrators in the not-so-distant future.

Today, all the international laws exist to bring the corrupt Khomeinist Regime to justice. Genocide and infanticide, considered crimes against humanity, is a standard international law. On the other hand, Iranians, relying on and knowing about the establishment of the fact-finding committee, demand the closure of institutions and embassies of the Khomeinist regime in Europe as soon as possible.

With the establishment of the truth-seeking committee, which has seriously disturbed the Mullah regime, the measures planned by the freedom-loving Iranians against the regime by the European Union have taken a practical form and will prevent a larger genocide and infanticide. Before this, Westerners followed the bankrupt policy of “Neville Chamberlain” and continued to engage with the regime behind closed doors. Suddenly, they realized what kind of monster they were dealing with, that they were killing people in Iran and that killing Ukrainians had also become a windfall for them.

On the other hand, Tehran’s camaraderie with Putin, the 21st century bombarding Ukraine and destroying the country’s infrastructure, such as water and electricity, with the weapons of the terrorist Revolutionary Guard Corps, which after almost a year of support from the West has been able to stand against the beheading of the narcissistic Czar.

The great mistake of the West happened from the very first day, by not taking Vladimir Putin seriously and making him look small, causing his arrogance and increasing his power of destruction. Europe, which should have controlled Ukraine’s airspace from the beginning to prevent this great disaster, did not do so. Instead, it put its policy on all-round sanctions. In addition, the policy of comprehensive sanctions did not prevent Putin’s attack and occupation; it caused a constant attack on Ukraine and even brought the Khomeinist regime with it.

Western policy changed after the attack of the drones of the Khomeinist Regime on Ukraine; it shows how painful and costly Europe’s wrong decisions have been, while it was enough to put its main interests, the Khomeinist regime, under the same comprehensive sanctions against Russia.

Given all this, the Khomeinist regime and Putin are currently in a military confrontation against Europe and the human rights fact-finding committee that the people of Iran have been waiting for, for more than forty years. Implemented in the United Nations, the same policy was implemented in Libya, Egypt, Iraq and many other countries and led to the overthrow of totalitarian regimes.

The end of the Khomeinist regime has been officially decided from the point of view of global consensus. Now, all the domestic media of the European countries are talking about the national revolution of the Iranian nation in their news bulletins. In these years, the Khomeinist Regime tried to create a crisis in these situations by sabotaging and killing innocent people from Iraq to Yemen and the Persian Gulf to divert the international public opinion from their continued executions, torture and internal repression.  They also funded and provided arms and rockets to their proxies, terrorists who lobbed rockets into Israel or carried out drone attacks on Saudi Arabia, disrupting the region and the world. Tehran’s Islamic leaders are taking their last gasps, and the world is hopefully moving towards much better days without these criminals.

Ali Khamenei and Putin, the two occupying comrades, have overstepped their boundaries where Western Europe is concerned, and the West will never allow anyone such latitude; especially where Ukraine is concerned, which is like a crown jewel for Westerners. Hence, the case of these two chums should be rigorously investigated in the United Nations. Today, the West is no longer willing to continue Chamberlain’s policy; that’s why everyone hears the ending whistle for the criminal Khomeinists these days!