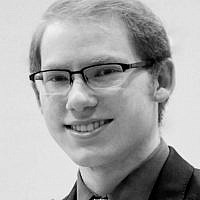 The Blogs
Jonah Coffey-Keyak
Apply for a Blog
Advertisement
Please note that the posts on The Blogs are contributed by third parties. The opinions, facts and any media content in them are presented solely by the authors, and neither The Times of Israel nor its partners assume any responsibility for them. Please contact us in case of abuse. In case of abuse,
Report this post.

I’m a 21 year old college student from California and I’m spending my hard earned summer in Israel. I heard the back-chilling screech of the siren as I sipped my chicken soup. I had no clue how long the siren sounded until I heard it since my ears were stuffed up from my cold. I did not know if I was too late. On my way down to the bomb shelter I heard the first “boom.” The second was heard about a minute later when I was already safe in the bomb shelter. When I came back from the bomb shelter, I was scared to take a shower and my chicken soup was cold.

From the Western Wall to Teddy Stadium the siren blasted throughout all of Jerusalem. On the same day sirens blasted throughout Tel-Aviv also. A wedding was even interrupted by one of these sirens. They do not care that I’m American. They do not care that I love to cook. They do not care that I’m human. They are terrorists. This is not politics. Children are being murdered. It doesn’t matter if you are Christian, Muslim, Arab or Palestinian; they want us dead. Death is raining from the sky, and there’s very little I can do about it. An innocent Palestinian baby was murdered by a rocket. Students were abducted and murdered on their way back home from school. A gay Palestinian teenager was burned alive. A young woman was kidnapped and murdered. Hamas has now stated multiple times that the five million civilians within rocket range have “become targets.” They have also stated that we just need to “wait and see stabbing attacks everywhere. Wait for suicide attacks on every bus, cafe and street…”

How long will this continue before it happens to your child? The media continues to report this as if it’s a war over some land. Yes it’s a war. It’s a war against all of Western Society. It’s terrorism. The terrorists say that I’m a “legitimate target.” This is not a game. Along with my mother, I will not sleep well tonight. I must now sleep with one ear open.

On the bright side; I’m feeling better now, I guess the siren scared my cold away. Life goes on, I just wish to live another day, for I am a target.

About the Author
Watching his mom start the first, pro-Israel Jewish democratic activist group called the Raul-Wallenberg Jewish Democratic Club in San Francisco, Jonah started Student Alliance for Israel in his high school. He spent two years at an Israeli Hesder Yeshiva and is currently a Senior at Yeshiva University and holds positions in YUPAC, the Environmental Society, and the Democratic Club in Yeshiva University.
Related Topics
Related Posts
Comments