I’m going to try to take you close to the heart of the Catholic experience. I’m going to talk about Confession.

How do you get back, when you’re astray – and you know it?

The old priest says: “At least you know it. That’s a blessing.”

And the prophet adds: God wants – God allows himself – to be found. “You will seek me and find me when you seek me with all your heart. I will be found by you.” That’s Jeremiah. 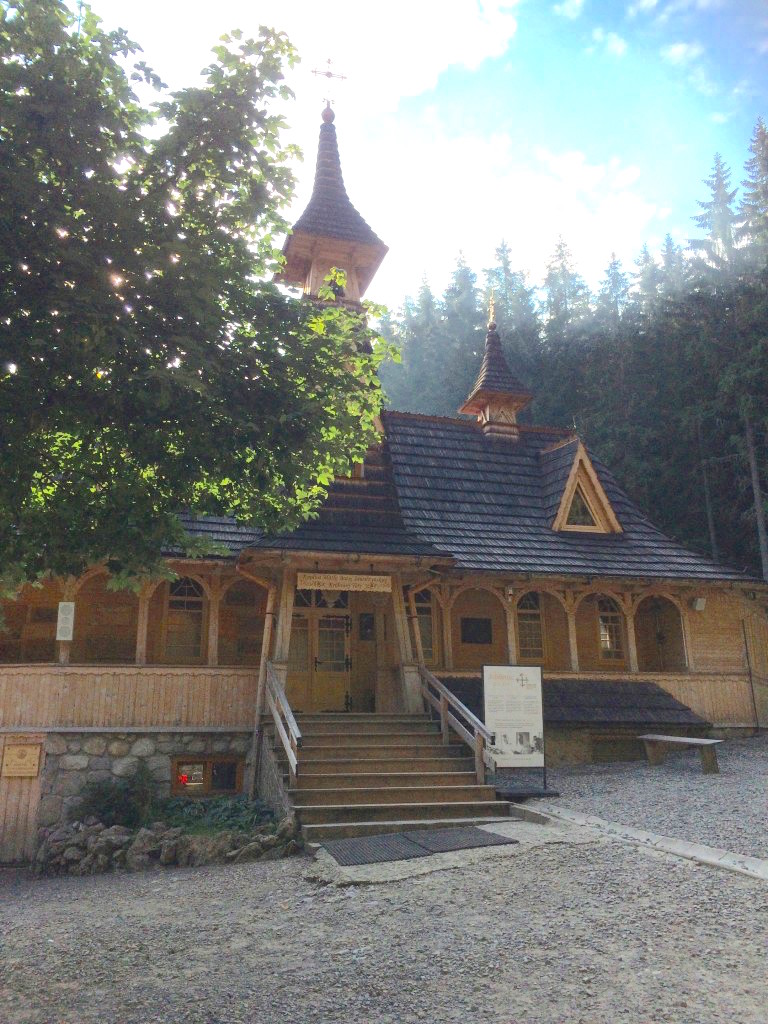 Need to go to confession 1146 meters (3760 feet) above sea level? I have been hearing many confessions this week in our wooden chapel in the Tatra mountains. It’s all raw wood; fire extinguishers are everywhere. I’m omitting a joke about hot sins. (Photo mine)

If you’re Catholic and you’ve sinned and you want to come back, you go to Confession.

At Confession, within a simple frame of prescribed prayers, Catholics tell their sins to a priest. If the priest is satisfied they’ve honestly confessed all the important sins they can remember since their last confession, and that they have firmly resolved to take steps to avoid those sins from that moment on, they receive absolution: God’s total forgiveness of sin.

Confession usually happens in a confessional, a purpose-built box. You might have seen one in a Mafia movie.

No particular shape or kind of confessional is prescribed by the Church’s law. In fact, no confessional is required at all. It’s just furniture. But practically everyone who was raised Catholic has been in one, and most resemble the one pictured here. They’re quite practical. 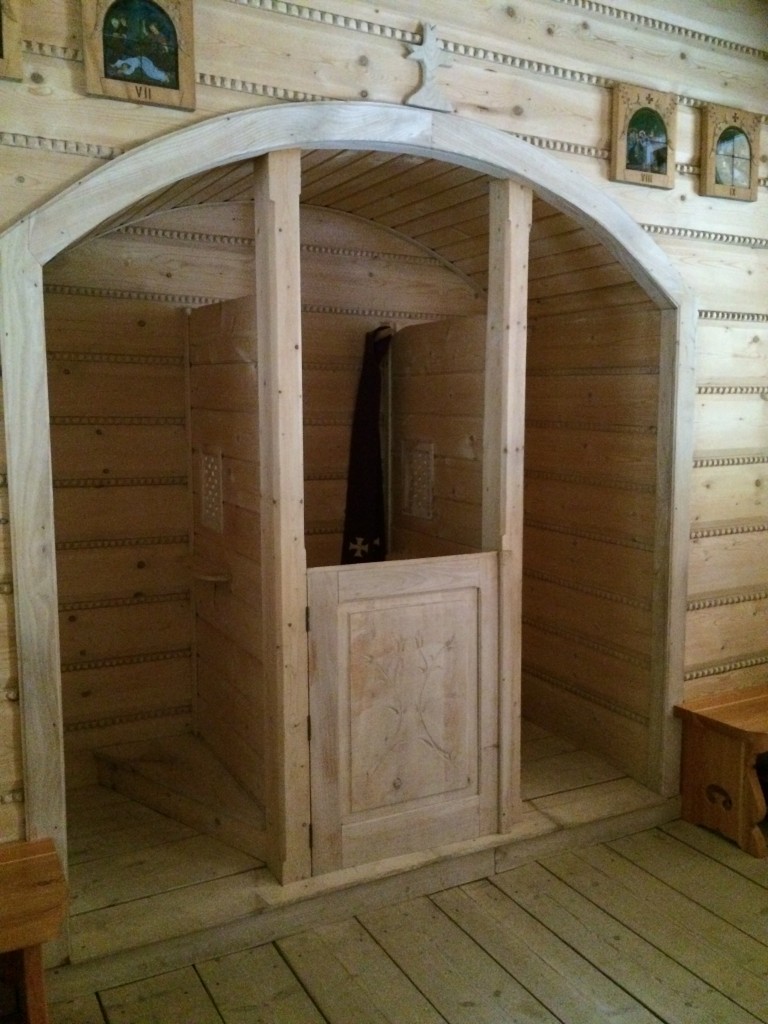 Here’s a country confessional, built into the wall of our chapel. The priest sits in the center, behind the little gate. The faithful kneel (one at a time) at his left or right, and whisper their sins through the rectangular screen. Photo mine.

Kneeling there in the semi-dark, the Catholic is shielded from the priest by a little screen. Everything he says in Confession is utterly secret: the priest is excommunicated if he repeats what he hears to anyone else. (There are priests who have died rather than betray what was said in Confession.)

But really, the penitent isn’t speaking to the priest at all, but to God. And when he has said his sins aloud, answered the priest’s questions, and perhaps listened to a bit of advice, he hears the priest speak these key words:

“I absolve you from your sins, in the name of the Father and of the Son and of the Holy Spirit.”

That “I” is spoken by the priest in the voice of God – one of the rare instances in our liturgy.

It can be a powerful sentence. 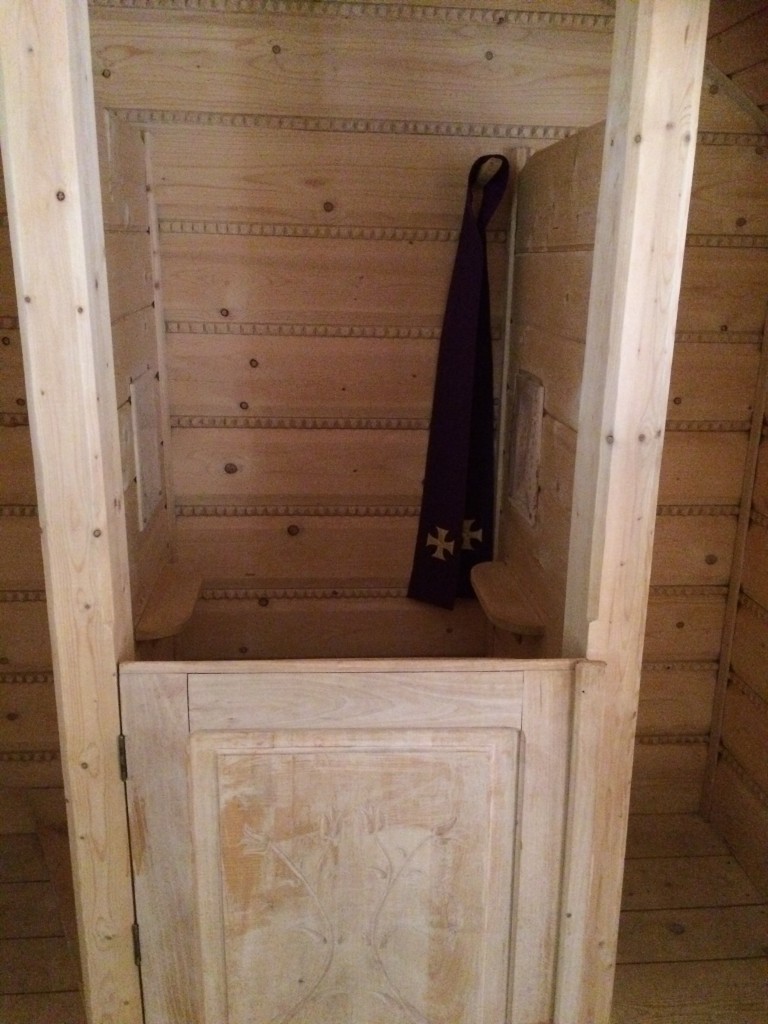 This is the central part of the confessional, where the priest sits. He wears the purple stole (here hanging on the right) around his shoulders. Purple, for Catholics, signifies penance and mourning. (Not for Jews, I am told by a pious lady in a big purple turban.)

Now, it’s not enough to tell the priest that you are sin-ful. (“I have a tendency to be lazy. I have trouble accepting others.”) That won’t cut it. You have to confess actual sins: free choices you made, knowing when you did so that you were going against God.

A child might confess, “I kicked my sister.” Yep, that’s a sin. And once a sin is confessed, it can be forgiven.

If you’ve done something seriously wrong — which God forbid — you also need to tell the priest how many times you did it. Hence the moth-bitten pious jokelet where the man confesses,

and the dozy priest responds, 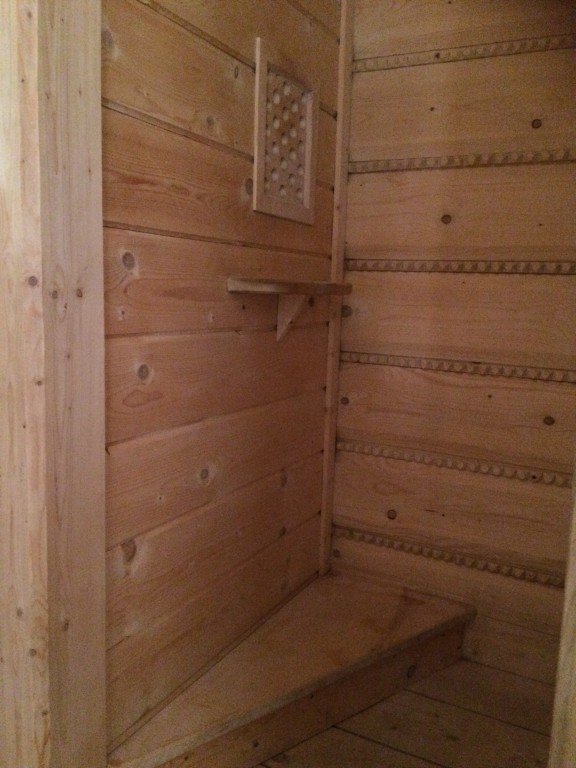 The person confessing kneels on the little wooden ledge below and leans for support on the tiny ledge under the screen.

These past few months since being ordained a priest, I have heard others’ confessions for the first time in my life. Until now, the only confession I ever experienced was my own.

After hundreds of confessions, patterns emerge: certain moments repeat themselves. But they are no less earth-shifting for their frequency:

Do you love her?

Then why don’t you get married?

Decisions are made in that box. 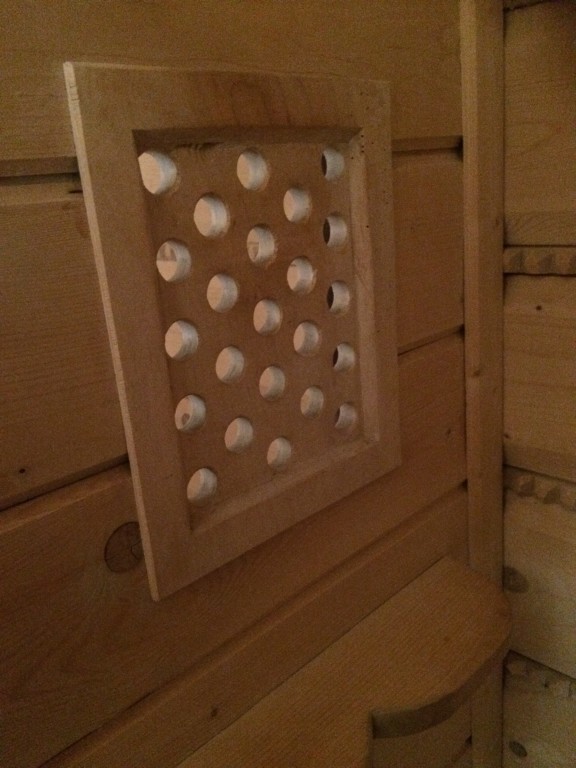 The screen in the confessional helps preserve anonymity. It also shields a person from shame (somewhat) so as to allow him to be perfectly honest. But it is perfectly acceptable to go to Confession with no screen at all.

On my side of the screen, somewhat to my own surprise, I don’t feel the adrenaline that comes from breaking taboos. There’s no titillation. I listen – dispassionately, usually; intently, always – on two levels, as does every well-trained priest.

On one level, I perform an instantaneous legal diagnosis. Is what the person is confessing a sin? Is it their own sin? Are they ready to stop? Am I empowered to convey God’s pardon for this sin, according to the Church’s law? (Sometimes — rarely — the answer is “no”.)

On another level, I’m thinking, “What does this person need to hear now?” There’s a little window after the sins have been said – 10 minutes, max – where I can jump in with a little encouragement; a little teaching. It’s best not to wade into particulars. It’s best to remind myself and the penitent of God’s abiding love.

God loves you. It may sound trite. But it’s never not true.

“‘For I know the plans I have for you,’ declares the Lord, ‘plans to prosper you and not to harm you, plans to give you hope and a future. Then you will call on me and come and pray to me, and I will listen to you.’” Jeremiah again. 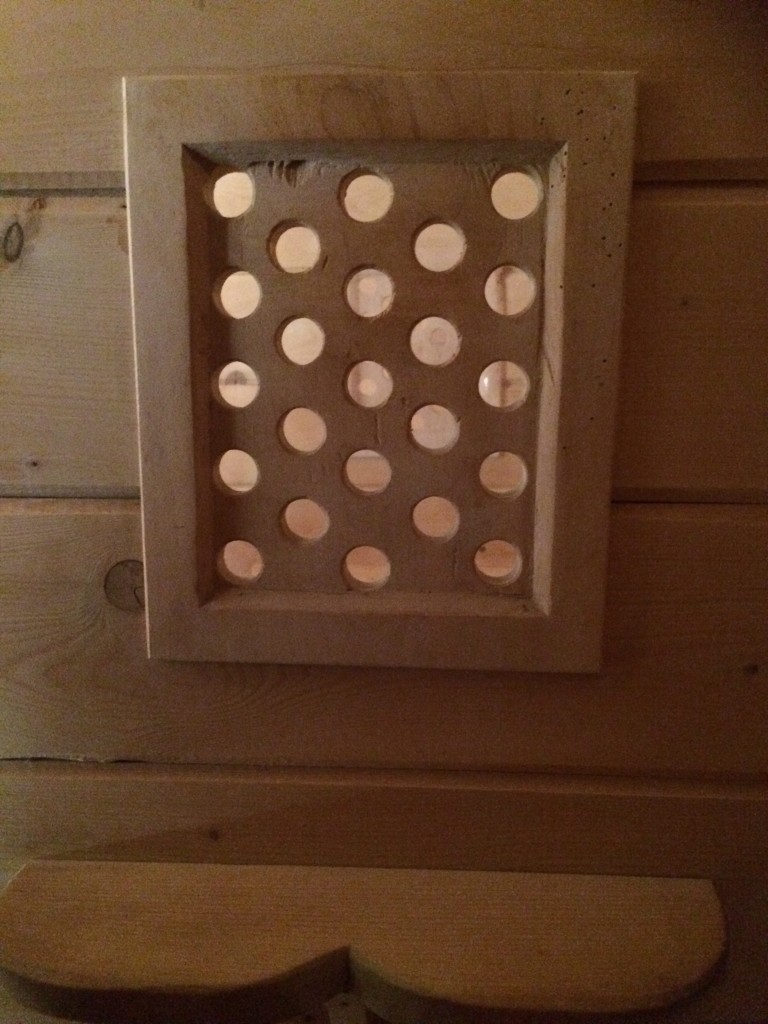 What the penitent sees. The famous sentry-box-like shape of the confessional was supposedly invented by Saint Charles Borromeo, a stern cardinal-archbishop of Milan in the 16th century, at the time of the Tridentine reforms. In Poland, an unpretentious country, it is typical for some church-mouse to tape a big rectangle of clear plastic over the grate in the confessional. That keeps spit and breath from flying in either direction (in pre-Colgate Poland, perhaps more necessary than now). Usually, people whisper so feebly that I have to push my ear up against the improvised barrier. It crinkles.

How do priests prepare to hear confession?

Through a lifetime of going to confession themselves.

And then: one has to be certified by a panel of judges.

I remember the day of the Great Confession Test. Six priests of three generations assembled a big classroom in Krakow in a part of the monastery that was once used to raise pigs, under old oil portraits of Great Dominicans hanging crookedly on big blank walls, next to an upright Socialist piano from Legnica covered in tiger-striped wood veneer. They milled around drinking Nescafé.

Then the priests separated themselves into three pairs and sat down behind desks in the corners of the hall. Two-headed monsters.

In front of the desks were hard little chairs. And on those chairs we sat to be examined.

I spent about 30 minutes with each monster, peppered with questions and answering aloud. A bell rang and we switched stations. And again. It was an exhaustive and exhausting 90 minutes of examination.

The examiners seemed caught up in a spirit of merry mischief. They hatched odd questions. Part of what they asked had to do with canon law (Catholic halakhah) and various scholastic definitions for truly abstract concepts like “conscience” “will” or “grace”.

But what really gave them a hoot was coming up with a good “casus” – a juicy and complicated “case” for confession.

The questioners impersonated distraught penitents. How tortured could they make their hypothetical lives?

“I am a priest who convinced a woman to go to bed with me by promising her that I would personally hear her confession afterwards and absolve her from the sin we committed together. What do you say?”

“I want to marry my sister’s daughter.”

“I joined the Jehovah’s Witnesses but want to come back and be Catholic. Oh, and I am sleeping with my boyfriend, who is a witch doctor.”

Sometimes it’s a matter of seeing the forest despite the trees. The woman confessing the sin of anger becomes a different person when she reveals that she is angry at the husband who abuses her. The questioners checked us for signs of humanity, too.

The Church tries to make a science of the spaghetti-mess of the soul. But the fundamental assumption — and saving grace — is that ours is a God who can make the crooked straight.

He can and He will — as long as we give Him the chance. 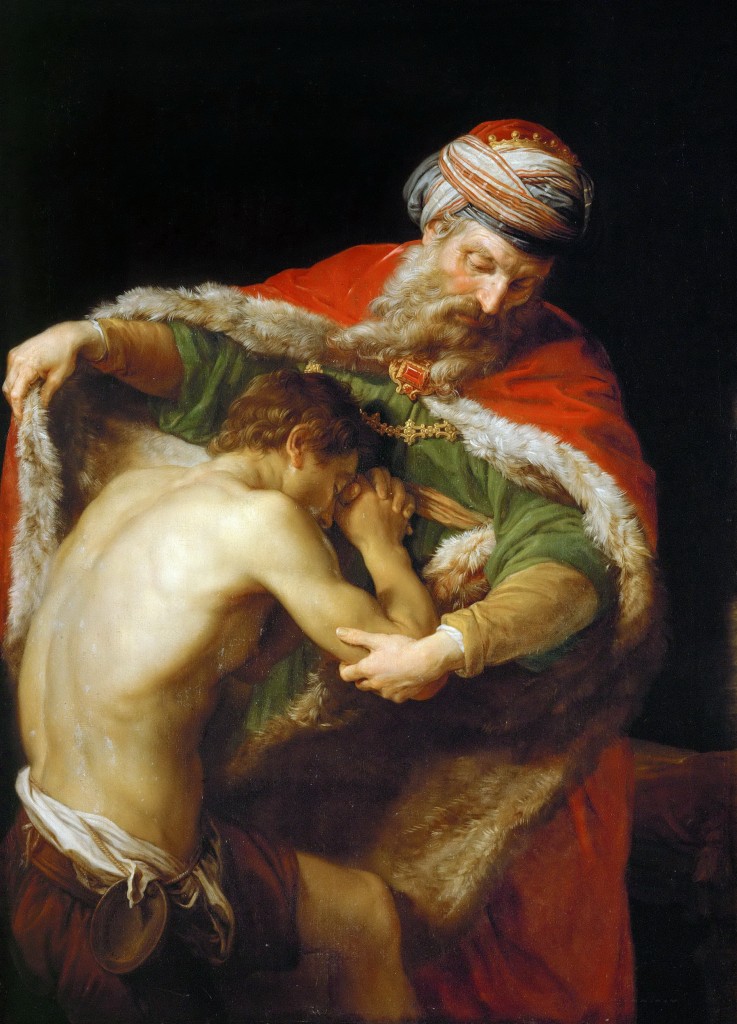 Pompeo Batoni, The Return of the Prodigal Son, 1773. “But when he came to himself he said, ‘… I will get up and go to my father, and will tell him, “Father, I have sinned against heaven, and in your sight. I am no more worthy to be called your son. Make me as one of your hired servants.”‘ He arose, and came to his father. But while he was still far off, his father saw him, and was moved with compassion, and ran towards him, and fell on his neck, and kissed him.” (Luke 15:17-20)

Let’s remember whom we’re dealing with: God, the Creator.

God is almighty; He is all-knowing. God needs nothing and no one. He doesn’t need me.

But he made me — out of totally unselfish love.

He made me because He wants me to exist. And it is His pleasure to keep me in existence, moment by moment, because He likes having me around.

That’s important. It means that the God I meet in the confessional isn’t a boss or a critic or an affronted Dowager Countess, but a Father and a Friend.

God loves. We can love Him in return. But if we do, we will love Him by our own free choice, as free people. He doesn’t force us.

And it seems God doesn’t like to barge in: He lets the Prodigal Son go and lose himself in revelry, as Luke tells it in his Gospel. He lets the reveler impoverish himself with revelry until he’s hungry and broke and “would fain fill his belly with the husks that the swine did eat” — so much does God respect my freedom.

Yet I am the creature, and He is the Creator. He created me to be wise, strong, pure — and happy — and holy — in a way I and no other person can be. I can and will be all those things – but never without Him. Never without His help.

And so He helps. He is there with arms ready to receive me. But He hangs on, humbly, until I — humbly — cry “Help!”

Every few weeks since I was seven, I’ve heard myself say aloud the things of which I was most afraid and ashamed and exhausted. And I’ve waited for the voice on the other side of the screen to say what it will, never knowing.

And at the end I have always heard — every time, so far: “I absolve you from your sins.”