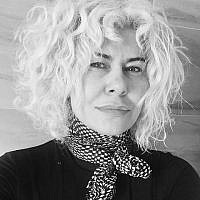 The Blogs
Liat Korduene
Apply for a Blog
Please note that the posts on The Blogs are contributed by third parties. The opinions, facts and any media content in them are presented solely by the authors, and neither The Times of Israel nor its partners assume any responsibility for them. Please contact us in case of abuse. In case of abuse,
Report this post. 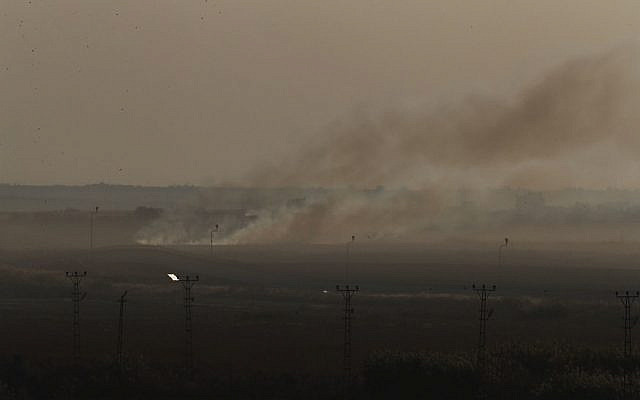 In this photo taken from the Turkish side of the border between Turkey and Syria, in Akcakale, Sanliurfa province, southeastern Turkey, smoke billows from target in Tel Abyad, Syria, during bombardment by Turkish forces, Saturday, Oct. 12, 2019. (AP Photo/Lefteris Pitarakis - Jewish News)

Four days after the Turkish invasion of Kurdish land in Northeast Syria, I walked into a big demonstration in London with three friends. Although deep down I hoped that we weren’t the only ones, as far as we could see throughout the next 3 hours, we were the only visibly Jewish people walking towards Parliament Square with about 23,000 Kurds and friends of Kurds. It was astonishing to see so many Kurds together. With ‘Kurdistan’ divided between Iran, Iraq, Syria and Turkey, Kurds are one of the the biggest stateless people on earth, separated not only by borders but also by different tragedies from tyrannical dictators.

And here we are in London walking and chanting for a tiny part of a divided Kurdistan called Rojava, a democratic, multicultural and peaceful seed of hope for Syria that never threatened Turkey.

My friends Jonathan and Harry had their kippas on. I held a placard saying “Israel Supports Kurds”. We all chanted with the crowd ‘Free Free Kurdistan, Terrorist Erdogan’, ‘biji Rojava’ and ‘Turkey out of Kurdistan’. Whenever there was a little silence Harry shouted ‘Jews for Kurdistan, Jews for Kurdistan!’

Harry’s words were interrupted by a middle aged, well spoken westerner who arrogantly demanded to know ‘Why are you here?!’ He stated ‘Israel is the root of all of the problems, You shouldn’t be here!’. I found myself standing in the middle of my friend and the accuser. Looking into his eyes I said “I am a Jewish Kurd and I’m here representing over 200,000 Jewish Kurds who live in Israel. Who are you?!”

I have met many like him before. Someone who follows a caricature narrative. Someone who knows nothing about the thousands of years of joint history that Jews and Kurds shared in the Middle East. Someone who did not know how Muslim Kurds helped their Jewish friends escape the pogroms and reach their only shelter, Israel, in the early 1950s. He probably never met any patriotic Israeli Jewish Kurds who keep their culture intact and have many agricultural villages. He may conveniently ignore the help and support Israel and its people offered Kurds in the past and to this very day. He might denounce alliances between Israel and persecuted minorities.Would he refuse the fact that Jewish people are indigenous to the Middle East and have every right to have a state of their own on their ancestral land?

It was not the right time or place to challenge his hostility, so I turned my back on him. Now I was facing the crowd behind me and talking to them in Kurdish. “Hevalno, ez ji Kurd’im, Kurd e Cehu!” I said. I am Kurdish too, a Jewish Kurd. I could see a few smiles. ‘Ser ceva’ said an old man, ‘welcome’ in Kurdish. “We had a demonstration in Yarushalayim, in Tel Aviv for Rojava, for Kurdistan. We are with you, Jewish people are with you” I said.

There’s a deep sorrow among Kurds in every corner of the world. A genocide is unfolding before our eyes.

Whatever happens we know that these indigenous people, the brave children of Kurdistan, the people who have the will, courage and potential to create peace, will live in the Middle East and have their free Kurdistan one day. In these dark days, I hear Kurds saying what they heard from their grandparents and great grandparents after every betrayal, every despair and every massacre: ‘no friends but mountains!’ And I wonder how many mountains did Moses seek refuge in when he wondered in the wilderness with his people.

About the Author
Liat Korduene is a Member of the HDK Europe (People’s Democratic Congress). She is a campaigner for Israel-Kurdish friendship
Related Topics
Related Posts
Comments