The Blogs
Zalmi Unsdorfer
Chairman, Likud-Herut UK
Apply for a Blog
Please note that the posts on The Blogs are contributed by third parties. The opinions, facts and any media content in them are presented solely by the authors, and neither The Times of Israel nor its partners assume any responsibility for them. Please contact us in case of abuse. In case of abuse,
Report this post. 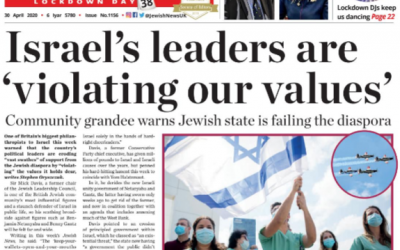 Tevye the milkman sang it best: “When you’re rich they think you really know!”

So, what do you really know Mick? Are you some political scientist or professor of economics that qualifies you to trash the political and economic system of Israel?  No, you are just a guy with a boatload of money and 3 establishment letters in front of your name.

The trouble with the rich and famous is that they crave attention and acceptance by the establishment. That’s not so easy for Jewish A-listers as no amount of money and philanthropy can fully endear them to the chattering classes. The only thing that seems to work is bad-mouthing Israel. There’s nothing anti-Semites like more than the rantings of a self-hating Jew. You only have to look at the leadership of Labour’s toxic Momentum group.

But among Jews you are, sadly, in plenty of company. In claiming that Israel’s leaders are ‘violating our values’ you imply that they are emulating the ‘dysfunction, corruption and intransigence’ of the Palestinians. That’s a line that could have been written by Noam Chomsky. You say that annexation (of the Jordan Valley and Jewish settlements under the Trump peace plan) is an existential threat to Israel. That could have been written by George Soros.

As so you go on, trashing Israel’s governance, its political system, its OECD ranking and even questioning the state of ‘Jewish peoplehood’ – it really ends up as dumb as a piece of Trudeau. In fact the whole piece smacks of the same social-climbing and career-advancement used by all too many Jews in media and academia, always at the expense of their homeland. Say something bad about your people and get yourself noticed, awarded or acclaimed. Every upward move for you people is a piton hammered into the heart of Israel.

You talk about ‘the country of Ben Gurion’ and then mock the ‘hyper proportional’ political system he crafted. But I guess any system that elects Netanyahu is, for you, broken. Instead you totally ignore the achievements of Israel’s most popular and longest-serving prime minister who has energised and enriched Israel by almost every metric since opening it up to free market principles. Despite being surrounded by mortal enemies, Israel is consistently at the top of global rankings in everything from the happiness index to the handling of Covid-19. Yes, there is a larger gap between rich and poor, but did you ever consider that might have something to do with the meteoric rise of tech billionaires which is unmatched by any other country? Don’t blame Israelis for their own ingenuity.

And finally you talk of ‘Diaspora Zionism’ when you are simply an armchair Zionist with a bigger mouth and wallet than most. While you are yachting off Barbados, Jewish children cower in the bunkers of Sderot. But they will grow up to be better Jews than you. And they won’t need your money or your advice.

About the Author
Zalmi Unsdorfer is a Jewish Religious Zionist and Chairman of Likud-Herut UK. He is a commentator on Israel as a writer, TV & panel commentator, and advocate. He supports Jewish resettlement in all of the Jewish homeland, Eretz Israel.
Related Topics
Related Posts
Comments