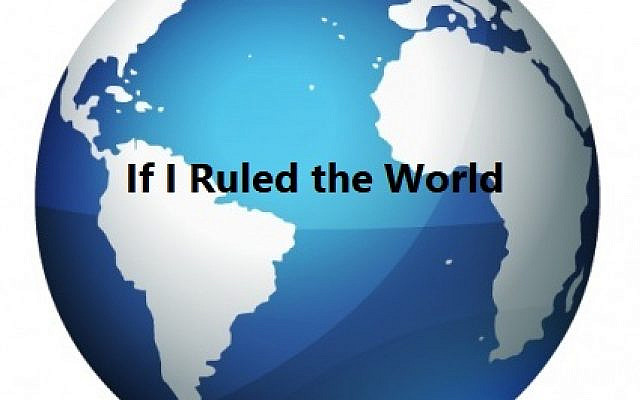 My World by Roger M. Kaye

It is not easy running the world. Of course, I am not alone. I have my secret cabal; my six grandchildren help me, although the older two usually find better things to do.

By its very nature, most of my work is done in secret. I have a direct line to all the world leaders that allows me to give them their instructions. It is called the Israel Postal Service. I write out detailed instructions, put them in envelopes addressed to The Top Man France, The Top Man Sweden …… and slip them into the postbox. Unfortunately, of late the Israel Postal Service has been infiltrated by elements unfavourable to my cause. Many of my instructions have failed to reach their target.

Just last week, I sent clear instructions to both the Belgian prime minister and the mayor of the city of Aalst to cancel their vile anti-Semitic parade. This so-called carnival features caricatures of Orthodox Jews dressed as ants with large fur hats and long fake noses. As, despite my instructions, the carnival did take place, I can only assume that Israel Post dropped the ball and my clearly addressed envelope is still on its way.

Of course, Belgium is not only antisemitism. A quick internet search for what has Belgium given the world brings praline chocolates, the cartoon hero Tintin and Trappist beer. By contrast, a similar search for Israel gives us repairing heart tissues from algae, drip irrigation, SniffPhone Mobile Disease Diagnostics, and creating the healthiest tomato varieties.

Another of my instructions went unheeded. I asked, no, told German Chancellor Angela Merkel not to ignore Iran’s genocidal antisemitism. Merkel has stated that Iran’s call to wipe out the State of Israel is not antisemitism. It would seem that the deaths of Israel’s six million Jews at the hands of Iran would be perfectly acceptable to Germany. After all, Germany killed six million Jews and suffered no long-term consequences.

After a quick consultation with my cabal, I decided to go for a more realistic target. Trying to get the world to run to my rules, I sent instructions to the United Nations. While Israel is the only democracy in a region filled with dictators, and is fighting for its very existence, the United Nations spends much of its time issuing one-sided resolutions of condemnation against the Jewish state. This must stop; the UN must take account of all the circumstances under which Israel acts. A fair and balanced resolution would consider not just Israel’s actions on the border with Gaza but would look at the Palestinian’s actions that lead to Israel’s response. The UN must understand that Israel’s leaders do not wake up in the morning and say – let’s bomb Gaza today. No, they are defending her citizens against a ruthless enemy who has no hesitation in shelling kindergartens and rocketing schools.

Yes, running the world is a hard and thankless job. But, now that readers of this blog know the truth, perhaps I will get some help. Volunteers are welcome.