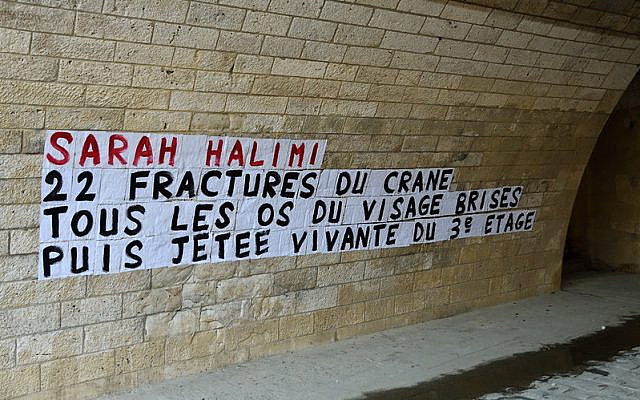 Photo by Martin V Moris on Flicrk Creative License, stating that Sarah Halimi had 22 fractures and was thrown out of a 3rd story building.

This month France opened hunting season on French Jews and decided that justice was no longer a value they cared about.

A judge dismissed all charges against a man who killed Sarah Halimi. The man beat her and called her a dirty Jew before throwing her out of a window. Just like thousands if not millions of other criminals and non-criminals who smoke cannabis every day, he smoked marijuana a few hours beforehand. In a stunning move, the judge accepted the argument that the same drug that millions of people smoke every day and do not kill soon after smoking, in this instance, made him kill a woman and he was not in charge of his actions.

This is an antisemitic ruling. If it wasn’t, then France would be required to set free all past and future killers and criminals who smoked cannabis prior to their crime. This ruling puts every French person and Jews in particular in danger. Because if all you have to do prior to killing a Jew is smoke or ingest some marijuana, then what would stop anyone from killing Jews or anyone else.

Jewish people around the world have gone to protest in front of the French embassies to demand justice. But it should not be just Jews who demand justice, every single French person who cares for justice, who feels that people should not get away with murder if they smoke Marijuana, should be in the street and demanding a reversal of the ruling.

This brazen attack on a Jewish life, requires an equally large response. It requires showing French people that Jews have an impact, and killing them has an impact. It shows that French Jews have self-respect and dignity and demand respect and equal protection under the law. And if they don’t get it, they will make it clear about what happens when Jews disappear.

That’s what I would do. But will the French Jews stand up for themselves in a way that actually gets the French people’s attention? I don’t know.