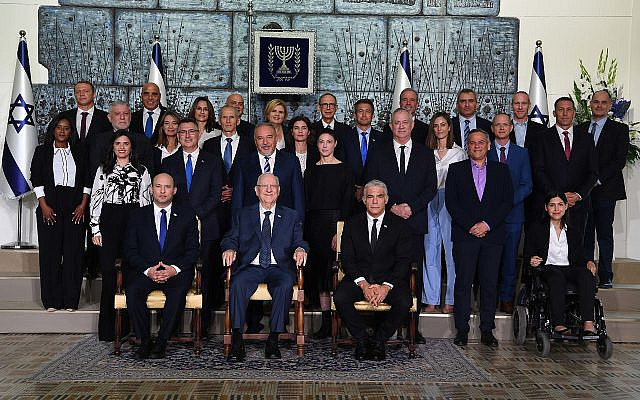 In a relatively short space of time – just 15 months! – the Change Government has managed to address issues relating to the individual. In particular, it has applied reforms and taken significant steps which unequivocally surpass the achievements of the previous government – the same government which overextended its term which stretched over 15 years.

These diverse actions taken by the Change Government indicate a genuine concern for its citizens and proves that if you really want to, things can be done differently!

Achievements such as these can only be made in a government that agrees to dig its hand deep inside its pocket, and the government has proven that it knows how to do this. The numbers and data speak for themselves.

For years and years, the enormous concern for the lives and safety of our soldiers has been discussed. And yet, there was no true manifestation of this concern. Up until a year ago, the living wages stipend offered to regular soldiers was embarrassing and far off from allowing the soldiers to actually survive on it.

The Change Government took NIS 900 million from the Treasury and raised the soldiers’ wages by a significant 50%. Another act of concern for the future of the combat soldiers and lone soldiers came in the form of the decision to subsidize 75% of the tuition fee towards a bachelor’s degree.

The current government also understands that singing the praises of soldiers who have been wounded should also be backed up by budgets. The “One Soul” reform launched in this short space of time, expands the range of medical treatments available to disabled IDF veterans and victims of terror with an impressive budget amounting to billions of shekels.

Up until the time that the Change Government came into power, the country operated mainly by “putting out fires”. Every crisis that arose was dealt with in a reactive and small-scale manner only. However, together with using this failed strategy, the previous government continued shamefully to ignore various sectors of citizens who had to fight for their rights or, alternatively, lived in an intolerable reality in which they found themselves in.

The economic steps taken by the Ministry of Finance in the past year points to a level of social sensitivity of the leaders who, for the first time, acted to correct this injustice caused to disadvantaged sectors of the population in the State of Israel.

The fact that some Holocaust survivors live below the poverty line is a badge of shame for our people. It’s clear that we cannot atone for past actions, but the Change Government at least moved towards making some corrective changes, when it increased the compensation grant to these dear people by 60%. It’s regretful that some of the Holocaust survivors are no longer alive and did not get to experience the degree of respect which they so deserved.

Inexcusably, the subject of pensioners’ stipends didn’t even make it to the previous government’s budget table. The Change Government put a stop to this strategy of embarrassingly ignoring their needs and, in an extraordinary economic move, established for them an income supplement of up to 70% of the minimum wage.

Another issue which brought the Ministry of Finance to reach deep into its budget pockets related to families living under the poverty line. It can be said that these moves are a drop in the ocean, but if this general mindset is carried into the future, we may rediscover the “hope”. One of the significant steps taken was the addition of a tax credit point for working families with children aged 6 to 12 years.

From another direction, the Ministry of Finance budgeted an employment grant for about 120,000 low wage-earning citizens, at an average rate of NIS 4,830 each, and NIS 560 million flowed from the Treasury for this purpose.

This is also the place to point out the “educational” steps taken by the Minister of Finance as soon as he took office in his decision to cancel certain unemployment benefits. In doing so, he significantly reduced the unemployment figures and, on the other hand, infused “human capital” back into the economy which employers were seeking after the corona crisis.

Health and Safety Given Real Priority

Even huge issues that weren’t addressed for decades, received the appropriate attention in a relatively short space of time. The Ministry of Finance allocated NIS 5 million for the defense of the northern settlements and their residents, an important action that should’ve been taken a long time ago, and finally received the attention it required.

It may be remembered that during the global chaos of corona, the steering wheel was passed from one government to the Change Government. The latter demonstrated true leadership abilities, also in relation to other governments in the world. An example of this was the attention given to the business owners who were affected by the various waves of the epidemic, and who received grants from the Ministry of Finance. In an unusual step, and against the background of the insane hike in fuel prices around the world, a decision was made for the first time in the country’s history, to reduce the excise tax, leading to the stabilization of fuel prices in the country.

This article is too short to review all the steps taken by the Change Government. But we cannot end off without referring to the national pain caused by the health system. Obviously, there is still a long way to go. Yet, on the other hand, changes begin with at least one significant step. The decision that was made was to increase the Ministry of Health’s budget to NIS 2 billion and build two new hospitals in the north and south of the country.

About the Author
Shimon Sheves was General Director of the Prime Minister's office under the late Yizhak Rabin. He is currently the Founder and Chairman of HolistiCyber, which provides nation-state level cyber security solution.
Related Topics
Related Posts