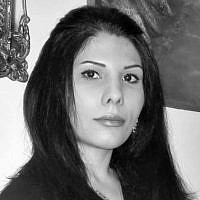 The Blogs
Neda Amin
Apply for a Blog
Advertisement
Please note that the posts on The Blogs are contributed by third parties. The opinions, facts and any media content in them are presented solely by the authors, and neither The Times of Israel nor its partners assume any responsibility for them. Please contact us in case of abuse. In case of abuse,
Report this post.

People who look at me often see a dark haired Iranian woman with black eyes. They think that I am a primitive person, who rides camels instead of cars and does not have a grasp of the modern world. They often dehumanize me, failing to look at me as an individual, instead seeing me as part of a backward system that is the enemy of the Israeli people and the West. But I ask you to look beyond this façade for it is misleading.

And do not think for a moment that the libelous anti-Semitic and hateful conspiracy theories spread by this regime reflect me in any way, shape or form.

Like other Iranians, I am the victim of a cruel dictatorship. I had to run away from their harassment, after they raped me and inflicted other forms of horrific torture upon me too painful for me to describe. When you look at my passport photo, do not mock me for the chador I was forced to wear and don’t tell me that I am Muslim. This was not my choice and none of the women in my country are given the freedom to act according to their conscience.

When people ask me to show them an ID, I have nothing to show them except an expired passport that cannot be renewed and an Israeli visa that must be renewed every several months. This is because I am a political refugee. It’s not because I am a spy. Please do not look at me like a spy who is likely to harm you because I have an expired passport. I do not have a bone in my body that is capable of harming a fly, let alone you. I am a human rights and animal rights activist, who suffers from post-traumatic stress disorder because of the trauma my government inflicted upon me. I do not have the emotional strength to sleep through the night without nightmares. I am not emotionally or physically capable of harming others.

Just because I am Iranian and was born in a Muslim majority country does not mean that I am a secret agent of the Iranian regime seeking to harm you. And just because I am dark complexioned and speak a language that utilizes the Arabic script does not make me an Arab. Persians aren’t and never were Arab. Do not deprive me of all of the rights I deserve because I lack citizenship and proper documentation.

Like many other Iranians, I fought for human rights in my country and was displaced because of it. And then, when, in Turkey, I decided to defend my ancestral homeland, Israel, I was threatened with deportation back to Iran. This was the price I paid for speaking out for truth and justice.

So, please do not judge me just because I am Iranian.

Despite the hardships I have faced, do not think for a second that I am ungrateful. On August 10, 2017, a little over one year ago, I arrived in Israel in large part because David Horovitz and the Times of Israel, with the help of others, supported me and helped me come safely from Turkey. If it was not for this, my situation today would be much worse than it is now. This move saved my life, as Turkey was about to deport me back to Iran where, due to my writing for the Times of Israel, I would have likely been raped, tortured, imprisoned and ultimately executed.

Arriving in Israel, a democratic and free country, I felt a huge sigh of relief. I was looking forward to happiness, prosperity and to enjoying the pleasures of life for the first time ever. However, over one year later, I still face many struggles as a political refugee in the Jewish state, who wants more than anything to be Israeli and Jewish.

Upon arrival in Israel, numerous media outlets flocked to interview me and to hear about why I had to flee both Turkey and Iran. Several people bent over backwards to help me. To this day, I owe the fact that I have a roof over my head, and food on the table, largely thanks to the generosity of the Times of Israel. Natan Sharansky well understood how I felt, and helped me, paying for my Hebrew ulpan and doing everything he could to assist me. And ever since then, Prime Minister Benjamin Netanyahu has not once failed to renew my visa every three months, even though my Iranian passport has expired by now and I have zero ability to renew it.

Nevertheless, while I am grateful for all of this, I have faced some difficulties that I very much would like to be solved. Soon after arriving in Israel, I presented documents to the Israeli authorities showing them that I am Jewish on my father’s side of the family. Under Israel’s Right of Return law, that should be enough to make me an Israeli citizen. However, I have a problem: The documents that I presented are photocopies and the Israeli authorities demand that I present the originals before they grant me citizenship. But the originals are in Iran.

I fled the Islamic Republic in great haste due to the threats I faced, leaving many things behind, and I have no means of obtaining the original documents. Even the photocopies of the documents were obtained with great difficulty. Despite this, the Israeli authorities so far have not made an exception and granted me Israeli citizenship, insisting that I must present the original documents.

At first, I understood this and it did not bother me too much. I knew that many people forged documents claiming Jewish ancestry before, and that for security reasons, the Israeli authorities must see the originals. I told myself that, anyway, I want to convert to Judaism, and once I finish the conversion program, these documents would be a non-issue, so I tried to proceed to get Israeli citizenship that way. However, the Israeli Rabbinate refuses to convert me, claiming that I needed to convert abroad and cannot do so from Israel.

For me, this is unforgivable and outrageous. My father is Jewish according to Halakha. I was raised on fond memories of Hebrew songs that he sang to me, and Jewish culture was always part of my life thanks to him. Judaism is not alien to me. Furthermore, I was never Muslim. It took me time to figure out I wanted to be Jewish. I came to the conclusion that I wanted to adopt the religion of my father.

Some Israelis think this is wrong and are trying to help me. Let us hope that they succeed. But until that happens, I am just a stateless refugee with an expired passport and an Israeli visa that needs to be renewed every three months. I have no security and no guaranteed safe haven. And ever since Sharansky left the Jewish Agency, my situation here is more precarious than ever.

While some people may disagree that my status here is in danger, I won’t be sure I’m truly safe until I get the blue Israeli ID.

On a daily basis, I interact with Israelis. While some are very warm and friendly towards me, doing their best to help me out, others are cold to me due to their hostile perception of Iranian people. While Netanyahu understands that the Iranian people and the regime are not one and the same, not every Israeli gets that. Some feel that every Iranian is a potential spy for the regime and they fail to see me as a human being in need. They see my expired passport that says I am Iranian and they want to get as far away from me as possible. As long as such bigoted people exist, who is to say that my status is secure if one of them obtains power and I do not have citizenship at that time? I think it is a miscarriage of justice that while a Palestinian Muslim who has zero Jewish roots can convert to Judaism in Israel and get Israeli citizenship, I cannot do so, when I have a Jewish father.

In conclusion, do not judge me. I am neither a terrorist nor an Arab. I am just an Iranian who has fallen victim to the crimes of the dictatorial regime in Iran, and of the regime run by a maniac called Erdogan, who thinks that he is the sultan and can resurrect a less tolerant form of the Ottoman Empire.

I want to emphasize that I will never reach my potential so long as I am barred from converting to Judaism, cannot get Israeli citizenship, and now cannot get Jewish Agency sponsorship for my Hebrew ulpan. I want nothing more than the chance to thrive, to succeed and to convert to Judaism so that I can return to the religion of my ancestors. Nothing more and nothing less.

About the Author
Neda Amin is an Iranian journalist and blogger. She lives in Israel.
Related Topics
Related Posts
Neda Amin
Comments