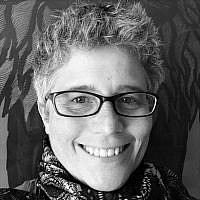 The Blogs
Tamar Wyschogrod
Not working for the clampdown.
Apply for a Blog
Please note that the posts on The Blogs are contributed by third parties. The opinions, facts and any media content in them are presented solely by the authors, and neither The Times of Israel nor its partners assume any responsibility for them. Please contact us in case of abuse. In case of abuse,
Report this post. 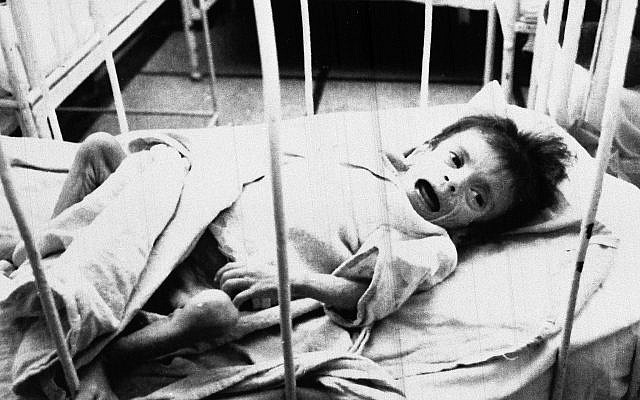 An orphaned child lies in a cot on the AIDS ward at Victor Babes Hospital in Bucharest, Romania, Feb. 7, 1990. (AP Photo/Peter Dejong)

Gather round, friends. I have a cautionary tale to share about an unhinged, megalomaniacal, authoritarian leader who was responsible for turning an epidemic into a humanitarian crisis because of ego, paranoia, stupidity, science denial, isolationism, and just plain evil. The result was unimaginable, preventable human suffering.

No, not Donald Trump. His name was Nicolae Ceausescu, and he was the leader of Romania.

In the 1980s, a deadly new contagion was making itself known around the world, which would eventually come to be recognized as HIV/AIDS. As it spread everywhere else, the HIV rate in Romania officially remained 0, due to Ceausescu’s policy of simply denying there was a problem. Unsurprisingly, this was false. HIV had indeed come to Romania, which had significant maritime trade with West Africa; it’s speculated that sailors probably brought the infection back with them. With no acknowledgment of the disease, there was also no prevention or testing, which of course allowed it to spread, contaminating the blood supply.

Let’s pause here to consider another wonderful feature of the Ceausescu regime. Ceausescu was not really big on consulting true experts, participating in the international community, or being rational. This resulted in some really unfortunate and bizarre policy decisions. With the stated aim of increasing the size of the workforce, under the assumption that this would somehow be good for the economy, abortion and birth control were outlawed, resulting in a flood of unwanted children. Needless to say, the economy only got worse, making it even harder for parents to raise these children. This created a population explosion in Romanian “orphanages” (a misnomer, as most children there were not, in fact, orphans).

Basically, Romania took its unwanted humans and locked them away (as has been done in other times and places to groups like refugees and minority underclasses). This created a large, extremely vulnerable population, hidden from society, that lived and died at the pleasure of the institutions where they were warehoused and the government that controlled those institutions.

Ceausescu wasn’t just a big science denier; he was a hypochondriac (kind of like a germophobe) and someone who took a lot of advice from sycophants and crackpots. An irrational ignoramus who thought he was clever, Ceausescu created policy based on whatever frequently terrible ideas appealed to him. This is how it came to pass that Romania instituted a medical practice unheard of anywhere else in the world – one that would create a humanitarian disaster of staggering proportions. Under the lunatic theory that children’s health could be strengthened by the blood of “healthy” people (as opposed to a good diet, exercise, education, and human attachment, none of which was provided), the orphanage population began receiving regular microtransfusions of blood – from a tainted blood supply. Due to lack of training and resources, not to mention sheer callousness, the most basic hygiene standards were ignored, and needles were reused without sterilization for dozens of children at a time.

The result, of course, was an AIDS epidemic like the world had never seen: almost entirely pediatric, and acquired from blood and needles (rather than via maternal transmission, which accounted for the vast majority of pediatric AIDS everywhere else in the world). No one will ever know how many children were essentially murdered this way, but it is certainly in the tens of thousands.

And there was another unusual aspect of the AIDS epidemic in Romania: Many of the infected institutionalized children died shockingly quickly. When Ceausescu was eventually overthrown and Western relief workers arrived, they found the reason. Sick children from orphanages were often transferred to separate wards where they were left — cold, naked, lying on urine-soaked mattresses, unfed and unwanted — to die. Many “AIDS” deaths were in fact due to exposure and malnutrition.

Normally, I would link to reliable sources that verify my facts, but I don’t feel the need to in this case. I am the source. In 1991-92, my husband and I lived in Romania. He, then fresh out of his pediatric residency, was studying this unique AIDS epidemic and providing medical assistance, and I, as his girl Friday, accompanied him to many meetings and visits at orphanages and hospitals. This is the story we learned from firsthand accounts and from our own experience.

Obviously, the situation with Donald Trump and COVID-19 at this point in America is not as ghastly as Nicolae Ceausescu and HIV/AIDS was then in Romania. Nor is this the first time I’ve compared Trump to Ceausescu. That’s because there are clear parallels. I’ll leave it to you to decide where the lines might reasonably be drawn. The very fact that we are on a road with significant similarities is incredible and horrifying. The thing is, it’s not too late for us. We can still turn back and take a different road, if we have the will. We can choose better leaders who make sane decisions based on facts and science. We can refuse to avert our eyes from hidden, vulnerable populations. We can decide to spend our considerable wealth helping those in need. I’m telling you this story because I believe that, if we stick our heads in the sand and refuse to see where this road leads, it’s possible that we will remain on it until it’s too late. But I also believe that we still have a choice.

About the Author
Tamar Wyschogrod is copy editor of New Jersey Monthly Magazine, the premier publication for incisive and illuminating reporting on the Garden State. As a journalist, she has covered local and global news, innovated delivery of online information, and most importantly, always put truth and accuracy front and center. Her blog brings a refreshing, progressive perspective to the Times of Israel.
Related Topics
Related Posts
Comments