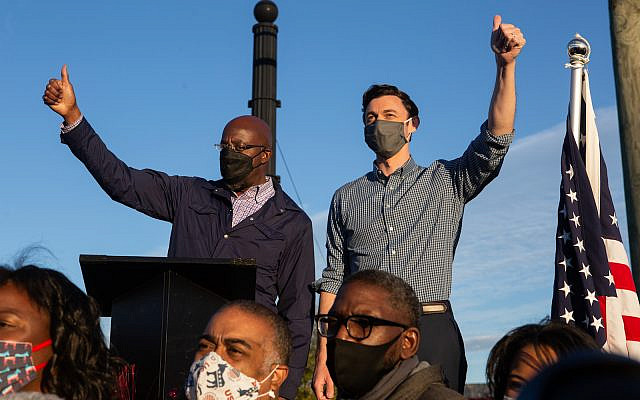 Rev. Raphael Warnock, left, a Democratic candidate in one of two runoff elections for U.S. Senate in Georgia, waves during a rally in Marietta, Nov. 15, 2020. (Jessica McGowan/Getty Images)

JTA — As a constituent and registered voter in New York’s 16th Congressional District in the Bronx, I worried when our primary election this summer became national news. With longtime incumbent Eliot Engel pitted against challenger Jamaal Bowman – a newcomer to politics and a “progressive insurgent” – the clash seemed like a metaphor for the divide in the Democratic Party between the establishment and an emboldened left.

Bowman’s emergence on the scene, especially in a spring and summer of protests on behalf of racial justice, signaled a significant and important changing of the guard for a district with a plurality Black population.

I spent much of the primary election hoping that the issues that are thought to define the Jewish communal agenda – in which Israel is the dominant issue of concern, and criticism of Israel is conflated with being anti-Israel – would not become the issue defining the difference between the two candidates. Engel was one of the more visible pro-Israel representatives in Congress on either side of the aisle, with backing from AIPAC and the Democratic Majority for Israel. Bowman was more of a newcomer to the issues surrounding Israel policy, and clearly was being advised and supported by progressive voices in the Jewish community who might have hoped he would advance their more progressive views on Israel.

There were some competing critical ads, as can be expected between a longtime incumbent and a political upstart, as well as a powerful exchange of public letters between Bowman and Engel supporter Rabbi Avi Weiss, one of the district’s leading spiritual leaders, interrogating and clarifying Bowman’s position on Israel.

But Bowman ultimately sailed through the race, and any Israel-related controversy faded after Bowman indicated his strong support for Israel’s right to live in security alongside his affirmation for Palestinian rights – essentially mainstream American policy for most of the past two decades. He also enlisted the support of some key pro-Israel influential leaders who helped mitigate any suspicion on the issue.

The race could have gone down the dangerous path of breaking down on lines of identity politics, and potentially inflaming the racially and socioeconomically divided district for much longer. Instead, the campaigns differed on matters of expertise, track records and visions for the future, sparing the district the divisive campaign some may have wished to see.

This relatively wholesome experience is why the tensions between the Rev. Raphael Warnock and Sen. Kelly Loeffler in the lead-up to the runoff for the Senate election in Georgia are causing me such concern, as I think about the future of Israel in American politics and the consequences that may emerge for race relations as well.

Last week, amid the post-election turmoil around the reluctance of the president to concede the election, Jewish Insider ran a story with a headline alleging that Warnock had signed on to a letter comparing Israel to apartheid South Africa. Further reporting, including scrutiny of the actual letter, showed that the same letter affirmed the importance of the two-state solution.

As the Jewish media began to scour Warnock’s past for data on his views, Warnock further clarified his position as now falling well within the mainstream pro-Israel camp, including his opposition to the Boycott, Divestment and Sanctions movement targeting Israel and an unwillingness to condition aid to Israel on settlement policy (and as such departing from a growing consensus in the progressive wing of the Democratic Party).

But this did not stop Loeffler, a non-Jewish Republican senator, from criticizing Warnock on the grounds of his “anti-Israel extremism.” I found this alarming and, frankly, terrifying.

Although Israel is not exclusively an electoral issue for Jews in America – it is a driver of evangelical politics and a flashpoint for some in the pro-Palestinian left – it often feels like a means of trafficking in legitimacy vis-à-vis the Jewish people. Loeffler was staking a claim not just to political terrain but to Jews as allies in a way that inevitably tests Jewish reciprocity. This move is also inseparable from the politics of racial justice. In fact, Loeffler has explicitly condemned Black Lives Matter for being, in her words, “anti-Semitic.” Thus the incumbent was positioning herself as the arbiter of what was or wasn’t anti-Semitic – taking away agency from Black Americans and from Jewish Americans at the same time.

This crude form of intersectionality in the hands of a member of Congress is dangerous for the Jewish people and the cause of supporting Israel. It is especially troubling because, in the midst of a polarizing election between two candidates from opposing parties, it is so patently unnecessary. There is no shortage of issues that divide blue and red America, and there is no shortage of needs for the Georgia electorate, during a pandemic, for which the candidates can offer competing sets of solutions.

The idea that the State of Israel and the existential security of Jews there and in America is the referendum for this one Senate race in a state with a population of approximately 130,000 Jews is astonishing. But the accusation of anti-Semitism as a means to discredit Warnock, a major civil rights leader and pastor at Ebenezer Baptist Church, has the potential not just to be politically opportunistic but dangerous. It turns the complicated commitments that Jews have toward Israel into something that can be reduced and claimed by opportunistic politicians. It sows seeds of suspicion of Jews engaged in racial justice and/or supportive of the Democratic Party by bifurcating the commitments that they have to Israel and Jewish survival against those they have toward other communities and to the fabric of our democracy. And it furthers a narrative that Black Americans have to pass through a crucible of pro-Israelism, defined by non-Jews, to curry favor with the Jewish community.

Jewish Americans already have much work to do in rebuilding our historically strong if teetering relationships with Black Americans, and that work remains important even if some of our leaders are drifting apart from one another about the commitments that we each consider core to our identity. Some Jews may even continue to harbor concerns about Warnock and the nature of his commitment to Israel – and that is fair play.

But the only way through those concerns is that we as a Jewish community build stronger relationships, tell our story and understand why it is that for a growing number of Americans on the political left and in minority communities, the calculus about the importance of the State of Israel has changed. This cannot happen – and it can badly backfire – if the Jewish community allows its interests to be leveraged against emergent Black politicians.

Eliot Engel was able to battle through a difficult primary challenge without resorting to cheap shots against his opponent on Israel or support for the Jewish people in spite of his own Jewishness and pro-Israel record. So it should be unthinkable for Kelly Loeffler.

Jewish Americans will suffer on both sides of the political aisle if we allow our story – that of our values here in America or our relationship to Israel – to be monopolized by one political party and weaponized against the other. The Georgia election is monumentally important and could change the balance of power in the U.S. Senate. I hope the voters there, including Jews in the state, make wise and reasoned choices.

What I especially hope, though, is that the Loeffler campaign has the courage to avoid the shortcut through the narrative of the Jewish people to make the case for her candidacy and stops using us as a cudgel against her opponent. For the Jewish people, there is more at stake here than her political career.