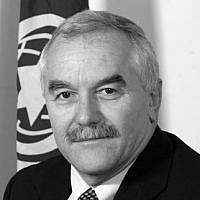 The Blogs
Yair Shamir
Apply for a Blog
Please note that the posts on The Blogs are contributed by third parties. The opinions, facts and any media content in them are presented solely by the authors, and neither The Times of Israel nor its partners assume any responsibility for them. Please contact us in case of abuse. In case of abuse,
Report this post.

Many have expressed concern over the U.S. strong opposition to Jewish construction in Jerusalem and in Judea and Samaria. I think the time has come to release ourselves from such simplistic conceptions that insult American intelligence. Most American legislators and policy makers understand that the strategic cooperation between Israel and the U.S. does not hinge on the Palestinian issue nor on the settlement issue not even on the overall conflict between Israel and the Arab nations. Rather, it is based on mutual and common interests in the Middle East and the world over such as Iran’s nuclear threat, counter- terrorism, missile defense, intelligence-sharing, battle tactics, defense and commercial industrial research, where Israel has a competitive edge over any other country in the world.

In the past two years anyone who has been witnessing the rise of the Islamic tide on the Arab street recognizes there is no ally in the Middle East or the world over as trustworthy and stable, capable, democratic and pro-American unconditionally as Israel. That is the reason the strategic cooperation between Israel and the U.S. increases despite the differences on – what the U.S. considers secondary issues – like the settlements, the Palestinian problem or even the Arab-Israel conflict.

Israel’s relationship with the U.S. flourishes regardless of who is the President or Prime Minister and whether there is chemistry between them. When my late father, Prime Minister Yitzhak Shamir, was in office neither Ronald Reagan nor George Bush agreed with his ideology and even threatened to cut off aid to Israel over the settlements issue. Yet during my father’s tenure U.S.-Israel relations were strengthened in an unprecedented manner. They all knew that even if there was no chemistry, you could rely on Shamir when the chips were down. The U.S. knows that Israel is a unique beachhead, of the Western democracies, that must be strengthened and fortified. They don’t view us as beggars but as a very valuable asset – the relationship between Israel and the U.S. is not one – but a two way – street.

Former U.S. Secretary of State Alexander Haig once described Israel as the biggest American aircraft carrier in the world without having to send even one American soldier, one that you cannot sink and is critical to American economic and military interests. If there were no Israel America would have send aircraft carriers with thousands of troops that would cost the US taxpayers billions of dollars. Israel saves the US all that money and work.

Some have also voiced concern over President Barack Obama’s nomination of John Kerry as Secretary of State who is known for his fierce opposition to settlements and views it as the primary obstacle to peace. Many are liable to feel that his nomination will deter Israel from implementing its decision to build thousands of apartments in Jerusalem, Judea and Samaria and will be viewed as an obstacle to Israel-U.S. relations.

About the Author
Yair Shamir is the Minister of Agriculture and Rural Development and a former Colonel in the Israeli Air Force.
Related Topics
Related Posts
Comments