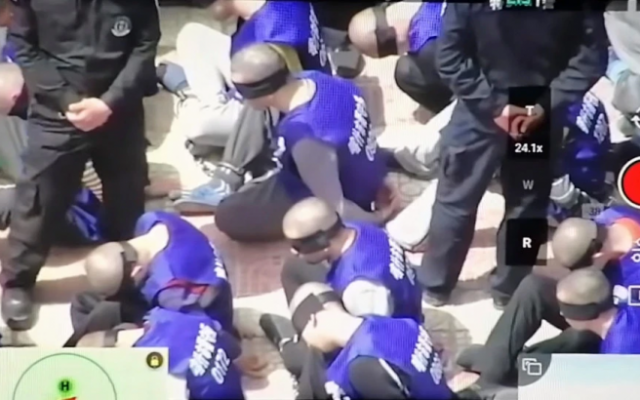 https://www.hmd.org.uk/news/what-is-it-with-me-and-the-uyghurs/ A still from drone surveillance of Uyghurs blindfolded and shackled being transferred by train to concentration camps.

“Based on the evidence put forward to it during the Sub-Committee hearings in 2018 and 2020, the Sub-Committee is persuaded that the actions of the Chinese Communist Party constitute genocide as laid out in the Genocide Convention.” –Human Rights Sub Committee, Parliament of Canada, October 21st 2020.

This post is dedicated to Emeritus Chief Rabbi Jonathan Sacks and his refuah shlemah from current illness. Rabbi Sacks, I hope you like it.

I was prepared to do anything.

Take my trousers down. Stand on one leg and recite the shema.

Anything to get past security and into the shul.

It was Erev Shabbat/Shemini Atzeret. Running too late for my own shul (synagogue), I decided to try the Chabad (Lubavitch) shul near my house.

“I’ll have to ask the Rabbi,” says the guard.

He returns. “The Rabbi says, do you know anyone davening (praying) here?”

Big grin! He opens the gate.

Would I have got the same response if I’d said “Glen Fiddich”?

After Tefilah (prayer), I thank the Chabad Rav.

He points to the mask I am wearing (bright red, with yellow letters saying ‘STOP UYGHUR GENOCIDE’ and rasps, “Very good work you’re doing! Very important to us all!”, waving his hand round the shul.

My! How things change. A year ago, I felt only a few of us knew about the Uyghurs’ persecution in China. Now, it’s mainstream news, with legal cases, motions in parliament and a burgeoning campaign movement.

However, it was the rabbi’s use of the words “very important to us all” that struck me. Perhaps one reason he described it so lies in this shabbat’s puzzling tale of the Tower of Babel.  A group of people in a place called Shinar gathers bricks, builds a tower to reach heaven and make a name for themselves. Hashem (God) comes down to earth and frustrates the project.  The commentators Rambam (13th Century, Spanish), Sforno (16th Century, Italian), Hirsch (19th Century ,German) and the Ntziv (19th Century, Russian) in different ways describe Babel as an intolerant  society seeking world domination, establishing a false deity and religion that brooks no intellectual  challenge, where individuals’ dignity and very lives are entirely subordinate to the state. The 8th or 9th century Midrash (Pirkei d’ Eliezer) tells how people wept if a brick fell from the tower, but not when a man fell and died. Louis Ginzberg’s Legends of the Bible (1) recounts how women gave birth, whilst working on the tower, then wrapped the baby in their clothing and continued to work.

Hirsch contemporizes his account by referring to Napoleon. The Ntziv wrote under pressure from the Russian Empire. The commentators make it clear that an intolerant society that aspires to hegemony is not what Hashem wants for mankind, a view so deeply rooted in Jewish historical experience and morality that the Jewish community’s leadership and most influential organisations, more than any other community’s in the UK, have spoken out against  China’s treatment of the Uyghur Muslims and other Turkic Muslim minorities.

For those who may not know, millions of Uyghurs are in concentration camps. Inside and outside the camps women face forced sterilisation and slave labour is widespread. A programme of forced organ harvesting provides transplants for recipients world wide.

The president of the Board of Deputies of British Jews wrote to the Chinese Ambassador, ex Chief Rabbi Sacks and the Holocaust Memorial Day Trust each issued  a strong statement, as did 75 Faith leaders, of whom 20 were Jewish. The Jewish News, working with Rene Cassin, the UN accredited Jewish human rights organisation, persuaded 152 parliamentarians to sign a Pledge demanding specific action from the government. Today I had a zoom meeting with all the Jewish Youth organisations, who plan a joint webinar to raise the Uyghurs’ profile and give young Jews concrete actions to take. Appropriately it is scheduled for erev Chanukah, ‘the genocide that almost happened’.

Over the last year, an international campaign has gathered, with sanctions, trade restrictions, an inter-parliamentary alliance of 19 nations, and complaints to the International Olympic Committee for giving the 2022 Winter Olympics to Beijing. Yesterday,  Canada’s Parliament made a determination of genocide, only days after reports that nearly a million young Uyghurs were removed from their families to CCP boarding schools where their language and religion is forbidden in order to erase their identity and culture.

This month, 39 nations signed a cross-regional statement to the UN demanding China allow immediate unfettered access to observers. The non-European signatories were the USA, Australia, New Zealand, the Marshall Islands, Palau, Nauru, Haiti and Honduras. Where was Israel?

I don’t like to criticise Israel. It has a lot to put up with. As it says in Pirkei Avot 2.5 “Do not judge your fellow until you come into his place”. However, we Jews have been in the Uyghurs’ place, many times, from Ramesses to Auschwitz. We are also the first people to register a long term protest against empire and hegemony(2). Thirty years ago, I heard the late Rabbi Micky Rosen (zichrono l’vracha), founder of Yakar, say that Moshe’s challenge  to Pharoah was theological and economic, casting Pharoah as a false deity and prioritising human dignity over the economic benefit of slavery. Sounds like an appeal against all reincarnations of Babel.  I thought, “That’s the kind of modern Orthodoxy I want!”

Our youth organisations have spoken of following up their event with another hosted by their counterparts in Israel. They may be successful, for civil groups now protest outside the Chinese Embassy each Friday.  After all, on Rosh Hashanah we pray for the day when “the righteous rejoice… as all wickedness fades away like smoke… and Hashem makes the rule of arrogance pass from the earth”.

As the Chabad Rav said, “It’s very important to us all!”