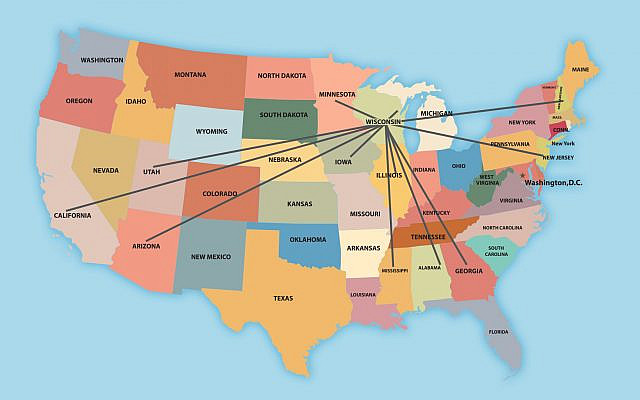 In Search of America graphic (by Brit Springer)

As I write this post from my Tel Aviv apartment, worried about a loved one who is sick back in the United States and waiting for her COVID-19 test results, I’m thinking about the America I left behind last August when I became a new citizen of Israel. The changes there have been so breathtakingly quick that I forgot how much I saw of what was coming without knowing it.

Five years ago, after watching the first Republican presidential debate in the lead-up to the 2016 election, I set off on a journey across the US to see what I might find. A newly retired school teacher, I thought of this as an adventure akin to my hitchhiking from coast to coast one summer when I was in college. Except mine was not a bucket-list pleasure trip.

Rather, my travels were part of an independent film project to interview people from all walks of life about the issues of the day during a significant moment in American history.

When I began my journey, more than a few of those I interviewed did not know all the candidates’ names. By the time I finished it, there was not yet an undisputed front-runner in either the Democratic or Republican primary races. As a result, there is little in my film about who was going to win the election. That was my intent.

I didn’t even ask people to reveal on camera whom they supported for president. Instead, I wanted to hear what they had to say about immigration and gun control, right to life vs. a woman’s choice, the environment and the economy, and more. What I captured with my camera offers glimpses of what was to come. Seen in retrospect, those glimpses are chilling.

No, there was nothing in what anyone said to foreshadow the enormity of the Black Lives Matter protests that have rocked America. There was, however, a grey-haired gun owner from Montana I met at a bar who railed against the violence ravaging the US.

In his day, the man told me, you wouldn’t dream of hearing someone shooting up a school. Today, he said, it’s common practice. This was in 2015, well before Florida’s Marjory Stoneman High School shooting that ushered in a student-led movement demanding gun control legislation.

Nobody predicted the meltdown of America’s economy, but two homeless men I met, one in Mississippi, the other in Utah, served as reminders that the world’s richest country had a staggering number of poor people and incarcerated a greater percentage of its citizens than any other nation.

Meanwhile, though the word “pandemic” never came up in any of the dozens of interviews that I conducted, I met one woman, a science teacher from Georgia, who said that America was headed for a cleansing, one that would be so radical that it would turn the country upside down.

And when would that change happen?

When we’re brought to our knees, she told me.

Is America on its knees?  Is a deep cleansing coming? Even with my 2020 hindsight, I can’t answer those questions today.

What I can say with confidence, is that I feel safer in Israel than I would in United States right now. Sadly, America appears to be sinking. Blessedly, Israel, for all of its problems, seems to be on the rise.

Whether you agree with me, or not, I invite you to watch my documentary.  If you want to join a Zoom discussion I’m planning about where America and Israel are now, email me at mbkornblatt@gmail.com, and I’ll send you a link.  and join me for a Zoom discussion