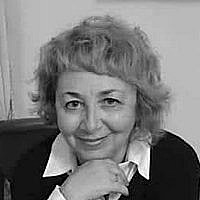 The Blogs
Alla Borisova-Linetskaya
Apply for a Blog
Advertisement
Please note that the posts on The Blogs are contributed by third parties. The opinions, facts and any media content in them are presented solely by the authors, and neither The Times of Israel nor its partners assume any responsibility for them. Please contact us in case of abuse. In case of abuse,
Report this post.

It’s an almost 24-hour journey. Thousands of steps clocked in during endless airport connections, flights delayed, a nervous exhaustion… “Do you have a second passport? Give it to me!” And then a long wait at the passport control.

That’s how I now travel from Israel to St. Petersburg. But as long as it’s possible to travel to see my loved ones I’ll continue to march through airports.

The day of arrival is gloomy, gloominess is a signature feature of my city, the city I now come to visit. The sky is hanging low, overcast with rain-soaked clouds. The surface of the Neva and the Fontanka rivers are covered with tiny ripples, “the goosebumps of chill,” the poet Andrei Voznesensky called them.

On Nevsky, a guy was selling refrigerator magnets and postcards; the tourist industry took off during the summer when the city emerged as a destination for tourists from other parts of Russia.

The souvenirs mostly featured images of the rain, not of the country’s leader. Each item was marked with a tiny stamp: “In Rain We Trust.” And he was probably right. If there is one thing you can continue to believe in St. Petersburg, it’s the rain. And the architecture of Rossi and Rastrelli. That’s the belief of those who have not fled but refuse to swallow the poison of state propaganda.

“Two weeks is not enough, you won’t have enough time to understand what’s happening here, because on its surface life looks the same,” a St. Petersburg friend warned me on the eve of my arrival.

Not exactly. Not the same. You walk down the streets so intimately familiar since your childhood – the spaces of memories: the love affairs, the deaths, the happy days, the grief. But everything seems to be covered with some invisible rust, some cobweb of tiny cracks that obscure the familiar. And the air feels… different. It’s the usual autumnal depressive mood of St. Petersburg, but also somehow… different.

There are no Westerners in the streets, you hear no European languages. The familiar brands and advertisements are gone, and their absence revives the past, not necessarily a happy past. At the Philharmonic, the concerts are announced with a patriotic flair. And then there is a huge poster of the upcoming concert of the famous cellist Sergei Roldugin, Putin’s close friend and, reportedly, his personal money launderer. I stop by the Alexandrinsky Theater. They are putting up a staging of “War and Peace” by the Lithuanian director Rimas Tuminas. Tuminas is opposed to the war, so I’m surprised that they are still willing to take this risk. Only they are not: a few days later the play will be canceled.

The atmosphere in the streets is subdued. But it’s supposed to be subdued, it’s St. Petersburg after all. This is not Moscow, where Putin has just inaugurated a gigantic Ferris Wheel. St. Petersburg doesn’t have that kind of money, or that sort of hubris. People walk around with a somber expression on their faces, but again, maybe they have always looked that way. Maybe I have forgotten that look, that reflection of the dark granite rocks and the chilly marshes that birthed this city. The wine at my favorite café The Crate is insanely expensive, as if it had traveled here from Spain in a particularly roundabout way. My friend and I are sipping the expensive wine and talk about the letter “Z,” which has been promoted by the regime as a symbol of the invasion of Ukraine.

– Do you see a lot of them around?

– Of course not. If anyone puts it up on their car, they’ll get their tires slashed. That’s how “excited” people are about the war.

At the next table, an unhappy looking middle-aged man was conversing with the waiter: “And you call this tea? It’s too strong, that’s what they brew in the slammer, bring me some boiling water, no bullshit.”

And then another conversation with a friend: “I wanted to move to Israel, I do have some Jewish roots. But no dice, they turned me down. And what am I supposed to do now? Go out and protest? It’s useless, they’ll simply put me in prison, and I can’t afford it, my family depends on me. So it’s back to the good old internal immigration. And the volunteer work, we connect online, there are thousands of people willing to help the refugees.”

Visitors throng to the Hermitage for a major exhibit of masterpieces from the Shchukin Collection. It’s now the destination – St. Petersburg has become the Paris of Russian provinces. And Vyborg is almost Finland, just like it used to be in the past.

The exhibit features 150  Impressionist works. They are remarkable, of course, but I can’t help thinking about the express train of history. As late as 1915, Sergei Shchukin, the founder of the collection, was still buying up art, but by 1918, he had already emigrated and his collection was expropriated by the Bolsheviks. The exhibition leaflet puts a patriotic spin on the story: it claims that Sergei Shuchukin was only too happy to have left his collection back in the motherland. But I suspect no one really asked his opinion.

“And what about the teachers?” I ask my friend, who is an educator. “It depends,” she says. “People don’t want any position of responsibility at work, because then they would have to parrot state propaganda. They try to avoid it.”

I was riding in a cab along the Neva embankment. “So Russia is now against everyone?” the driver asked me tentatively, after learning I’m from Israel. – “Yes, something like that.” My response encouraged him to continue. “I’m originally from Siberia,” he said, “It’s not good, the factories are closing down. But I’ve been here for a while now. I used to be a construction engineer, but now that I’m pushing 50, no one would give me a job. So I drive this taxi… until the state decides to take it away from me. You know, my sister-in-law, she lives with us… She keeps watching the pro-Putin talk-shows. And now, of course, she just yells that we need to kill all the fascists. My daughter complains that her aunt never turns off that damn TV. I can’t even look at the woman anymore. Seriously, I’m considering moving out. Her heart is filled with darkness. You see, I meet a lot of people from all over the country because of my work, she represents the majority. My daughter wanted to move to Poland. Her firm shut down. But it’s not that easy, so for now she is stuck here.”

He let me out on Palace Square. I stood there contemplating, as my favorite poet would say “the yellow of the government buildings.” They were still there – stately and immovable as ever. A lone pedestrian crossed the expanse of the square, wrapped in a heavy scarf against the autumnal chill. And looking at him, I thought that if you are still here, if you have not emigrated or ended up in prison, then you have retreated… deep inside yourself. That’s how it works. Always.

“Are you transporting any currency,” a customs officer asked me at the airport.

Yes, something else. My memories. Children, friends, the Neva… That’s what I’m transporting and for now they are still with me.

Translated from the Russian by Maxim Matusevich.

About the Author
Alla Borisova-Linetskaya is an editor and author. Born and educated in Leningrad she pursued her professional career in St. Petersburg, Russia, where she worked as an editor, journalist, and columnist at the city’s major newspapers. Her writing appeared on the site Jewish.ru and the popular blogs Echo Moscow and Snob. In 2002, she served as a Visiting Research Fellow at the Department of Journalism of the University of Illinois at Urbana-Champaign. Alla was a long-time editor of the Russian-language Israeli website ReLevant. Presently, she writes for the Israeli website Detaly.
Related Topics
Related Posts