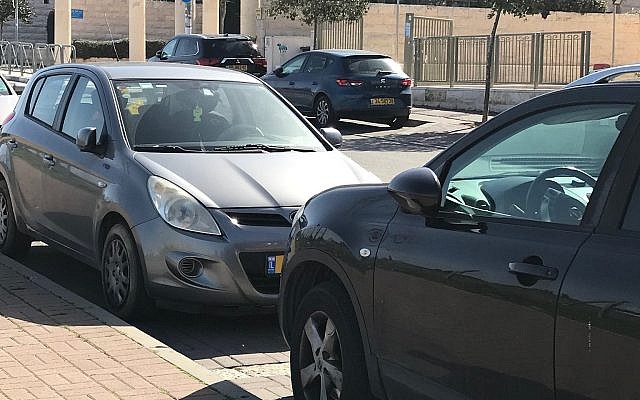 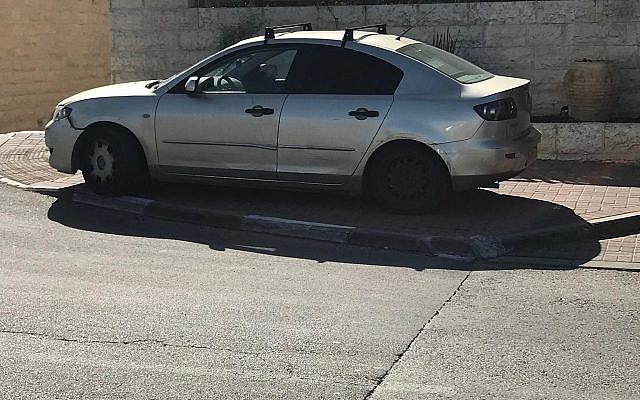 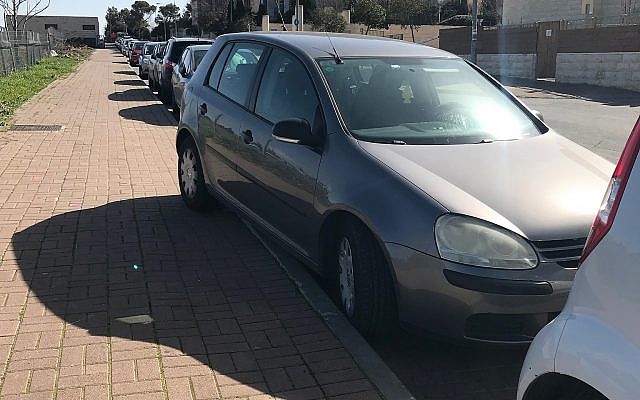 Car half on sidewalk

Several years ago we went to Israel on a family vacation, hoping to buy an apartment. Dealing with language, contractors, culture, metrics, time zone, money, voltage, politics of being an unabashed Zionist…”was a piece of cake”. If I wanted to live in Israel, a country which refers to driving as bumper cars, I had to be willing to drive. That terrified me…

We were visiting Rosh Pinah, (upper Galilee). I thought I’d try to drive, (fewer cars on the road). I started downhill, encountered a bike, swerved and saw a truck coming. I was ok until a goat jumped in front of our car from the hillside. I pulled over and said to my husband “you drive”.

I decided driving in Jerusalem on Friday night (please do not judge too hard) was a better option, there were fewer cars on the road. I plugged in our Garmin (GPS system before Waze). Garmin was a gift from our kids and became our best friend. We never went anywhere without it. The screen lit up like a spider web on crack cocaine and navigated for us. Following a map is a headache and asking for directions is worthless. No matter where you are or who you ask an Israeli will tell you, “Straight ahead and turn right.”

Here are some hard earned life lessons on driving in Israel…

“Universal” street signage is challenging, often distracting and sometimes unrecognizable. Ask an Israeli what a sign means, they will shrug their shoulders. Thank G-D for Waze (Israeli created navigation app bought by Google) it’s a game changer! Keep in mind you need a data plan to use Waze.

Roads are tricky especially the bus/taxi lanes. Those lanes are marked by yellow arrows painted on the pavement or on blue signs. There are yellow signs in Hebrew stating days and times the lanes are restricted to buses and taxis only. As a newby you feel like an idiot the first time you go down a bus/taxi lane, and pray you can quickly merge back with the cars. Once it happened, a police car stopped us, we played dumb American, and got off…

Stop lights! Red, yellow, green. Always go on yellow never on green unless you want to get honked at. Right on red? No go! People use horns constantly, when they pass, stop at a light, to say hello.

Parking is a hoot! IF you find a legal spot, the assumption is you pay from your phone app. We registered with Cello Park. You need an identity number to register. We are not citizens so we borrowed a friend’s number. You need to reregister your rental car each time you come. The set up is fairly simple, but a bit of guidance can be helpful. Yellow signage states the times you pay, usually written in Hebrew and army standard time. Numbers are written right to left the way an Israeli reads, 20:00-8:00.

What defines a legal spot? The curbs are painted in various candy stripe patterns, each pattern has it’s own meaning:

My daughter suggested, “Do what everybody else does”

So I land at Ben Gurion, and say a prayer of gratitude for a safe landing. I get a rental car, put in my bags, and take a deep breath. I replace my SIM card with Golan Telecom and plug in my phone charger. Some cars do not have USB ports, bring a cigarette lighter adapter for the cord. I keep my adapters, cords, and phone clip in the carry on suitcase. I attach the phone clip to the air vent, punch in the anti theft code, turn on the car, punch our address into Waze, pull out of the garage, take another deep breath, put on my Mr. Magoo hat and just drive…