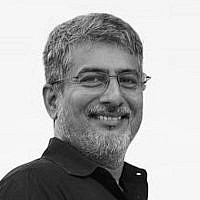 The Blogs
Soundarajan Narendran
The World is One Family
Apply for a Blog
Advertisement
Please note that the posts on The Blogs are contributed by third parties. The opinions, facts and any media content in them are presented solely by the authors, and neither The Times of Israel nor its partners assume any responsibility for them. Please contact us in case of abuse. In case of abuse,
Report this post.

In December last year, the Modi-led BJP government in India unveiled a $10-billion mega programme to develop an ecosystem that will make the country a global hub for electronics system design and manufacturing. This ambitious plan is seen as a crucial component of its grandiose Aatmanirbhar Bharat (Make in India) vision. The programme is ostensibly intended to make the Indian industry globally competitive.

This grand thought process involves a combination of financial and fiscal support.

Financial assistance to the tune of 50% of the project cost, purchase preference by the government, fund help for R&D (research and development) are among the key offers under the programme.

The Modi mission – if one were to call this as one – must be read in the context of the growing numbers. Currently, the global electronics market is estimated to be in the vicinity of $ 2 trillion. This is expected to grow exponentially in the wake of fast-changing dynamics. Emerging technologies such as 5G, IoT (Internet of Things), Artificial Intelligence, robotics, smart mobility, smart manufacturing et al are driving major metamorphosis in the global playing arena and Israel and its companies are leaders in this arena.

Read against his backdrop, the Modi government’s fab programme makes enormous sense from near-term as well long-term points of view. “Semiconductors and display manufacturing is a very complex and technology-intensive sector involving huge capital investments, high risk, long-gestation and pay-back periods, and rapid changes in technology, which require significant and sustained investments. The programme will give an impetus to semiconductors and display manufacturing by facilitating capital support and technological collaborations,” the government said while unveiling the package.

According to India’s Ministry of Electronics and Information Technology, the domestic value addition is estimated to be in the vicinity of 10% to 30% only. If the Ministry is to go by, the growth in manufacturing has primarily been on account of final assembly using imported components, sub-assemblies / parts, etc. This clearly indicates the absence of a robust semiconductor manufacturing ecosystem in the country.

It is fairly clear that the environment that is obtaining today in India requires a drastic overhaul if New Delhi is to succeed in its objective of making the country a strong base for electronics system design and manufacturing. No doubt, a serious beginning has been made. And, the intentions are indeed clear. Yet, the way forward isn’t going to be that easy.

McKinsey in a report has brought out clearly the peculiar dynamics of the semiconductor industry, which, in fact, comprises a host of segments such as memory, logic, analogue, optical components, sensors and the like. Individual semiconductor companies and their manufacturing sites tend to focus on select segments. Their end customers, by contrast, typically require products from all semiconductor segments and thus rely on multiple suppliers. Also, the production process is a lot more complex and multi-layered. “The industry has become increasingly consolidated within many of these value chain segments over the past 20 years, and a few champions have emerged in each area. As a result, expertise is often concentrated in certain markets (for instance, the United States has the highest presence of fab-less players—that is, chip design only—and equipment manufacturers). No local market has all the capabilities required for end-to-end semiconductor design and manufacturing and the concentration of expertise has created a web of inter-dependencies along the value chain,” the report said.

The semiconductor ecosystem, as we can see, is divided into OEMs who own the demand but are fabless (no manufacturing), manufacturing companies (fab ), testing firms and design companies. Countries such as Taiwan, South Korea, Singapore and Japan have developed all four. There is no play for mere manufacturing. Semiconductor manufacturing involves the creation of a larger ecosystem. Ipso facto, it calls for collaboration across the canvass. Chip OEMs (i.e. Intel, Arm) design companies, testing companies and services firms – all have to form an integral part of the large ecosystem. Mere manufacturing that is independent of all other players is going to be well nigh unviable and possibly cause greater peril going forward.

What is required is an integrated outlook. It is a gigantic task to start with. The government has to play a lead-role and not just do the facilitator role by announcing fiscal and financial incentives. One school of thought is that the government should just confine itself to giving licence and providing incentives. If it has to walk the talk, New Delhi must go full throttle. A public-private arrangement could prove a big success in this instance. A nudge theory of sorts could be a classical tool here to drive uninhibited success. India has some big names in the public sector such as ISRO, BEL and the like. And, there are time-tested private players such as the Tatas and TVS, to name a few. Why can’t there be partnership between these trusted domestic giants?

If proof were required, there is plenty on the global arena.
Taiwan Semiconductor Manufacturing Company (TSMC), the world’s largest semiconductor chip company, was started in 1987 by the Government of Taiwan in collaboration with Philips. Tech investors, too, joined to invest in the development of new technology. The Government of Taiwan and Philips held shares in the joint venture.

Samsung Semiconductor was a South Korean Government- led initiative to build competitive advantage for the growth of South Korea. GlobalFoundries of Singapore is again a government-invested company before it became a part of Mubadala Investment Company of the UAE. iMac, the largest chip design company in the world, is jointly owned by the EU Government. Historically, leading semiconductor companies were all started by their respective governments before they went public.

With the production-lined scheme in India has not been able to attract giants such asTSMC, UMC, SK Hynix, Samsung et al. India is only able to get second-tier companies with limited or no semiconductor manufacturing experience themselves. The reasons are not far to seek. The semiconductor ecosystem in India is still at its infancy.

The barriers for entry into semiconductor space are vehemently high. The development process is not just long but complex as well. As such the country has to adopt a combination route – setting up some OEMs, developing own chips and acquiring overseas fabs. China, Taiwan, Japan and South Korea have all built domestic OEMs to offset demand and, at the same time, it has gotten them a play in developing new technologies.

Post World War II, the Keiretsu model of industrial growth was lead by the Japanese Government. It backed investments, allowing domestic corporations to develop technologies and build market demand in the west. This gave disproportionate access to capital by Japanese companies as they went about creating competitive global success stories.

India needs its own Keiretsu moment to make semiconductors a fascinating success story.

About the Author
I am a data scientist with over 25 years of experience in Big Data and social media Analytics with Global experience on policy making, public policy and digital Government. I have had over 30 years business experience in product development, business channel and supply chain. I graduated as an electrical engineer from Indian Institute of Technology (IIT) Chennai and have held senior positions with corporations in India.
Related Topics
Related Posts