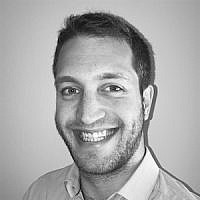 The Blogs
Kyle Blank
Apply for a Blog
Please note that the posts on The Blogs are contributed by third parties. The opinions, facts and any media content in them are presented solely by the authors, and neither The Times of Israel nor its partners assume any responsibility for them. Please contact us in case of abuse. In case of abuse,
Report this post.

For 18 years I commemorated the total destruction that befell my people in the last 2,000 years. Eighteen times I looked at gut wrenching photographs on Holocaust Memorial Day of the atrocities committed against millions of innocent men, women and children. Those who survived this hell on earth have tried to explain to us how they still believe in good notwithstanding the cataclysmic destruction to which they have born witness.

What baffles me the most regarding my commemoration of the Holocaust is that for 18 years I could never point to any clear emotions in association with the Holocaust. Rage? Of course I was filled with rage – but towards G-d for allowing this to happen or towards the Third Reich?  Fear? Why should I be afraid? I have my own air force, one that is capable of springing to my defense, from Tel Aviv to Entebbe and on to the farthest corners of the planet.

When I was 19-years-old, I traveled to Poland with a man, a Survivor; I look back on the shared experience we had and I cannot even begin to imagine the pain he felt as he returned to Auschwitz-Birkenau for the first time in 70 years.  His first memory of this camp was seeing pillars of smoke bellow to the sky without understanding that his mother’s memory was ascending within these clouds of souls. Now I knew what true rage felt like.

The trouble with finally having real feelings to associate with the Holocaust is that I have never found a place to discuss them: the terrible doubts I had, and continue to have, about my religious practice coupled with a G-d who turned a blind eye to his people in their hour of need; the anger toward the world for letting us burn. These overwhelming feelings have continued for years until now.

Last week, in a Zikaron BaSalon, a commemorative event of the Holocaust, I finally opened up about my religious doubts. Why did I feel I could finally discuss the Holocaust and my confused emotions? I guess it was a combination of vicariously reliving the terrors with a Holocaust victim who spoke at the Salon, my emotions rising to a peak, and sitting in a room filled with strangers who all wanted to conquer their own personal emotional turbulence.

Zikaron BaSalon is a grassroots initiative to commemorate the Holocaust. In an intimate setting, it allows people to think about the past through a personal or documented testimony, express their feelings through music, readings, and art, and to engage in a discussion about what the Holocaust means for our future.  While most Salons are held around the world on the Israeli Holocaust Memorial Day, this year on April 23rd, there are impromptu Salons that people hold – such as the life changing one I went to.

I would like to hope that the 500,000 people who were engaged with Zikaron BaSalon events in 2016 had similarly powerful experiences. People sit together and discuss the Holocaust using this unique platform, structured to enable the world to commemorate the Holocaust in a personal and direct way.

I can’t tell you if Zikaron BaSalon will pull the hate or fear out of your heart when hearing the word Holocaust. But I am sure that if you attend a Zikaron BaSalon, it will provide you with the first steps toward not feeling so lost when discussing and thinking about the trying times our people faced just 70 years ago. It helps guiding the complex emotions connected to continuing this important discussion as the last of the Survivors leave us.

About the Author
Kyle grew up in the New York area and moved to Israel on his own at the age of 18. After volunteering in both the International Red Cross and the IDF, Kyle studied business management at IDC Herzliya.
Related Topics
Related Posts
Comments