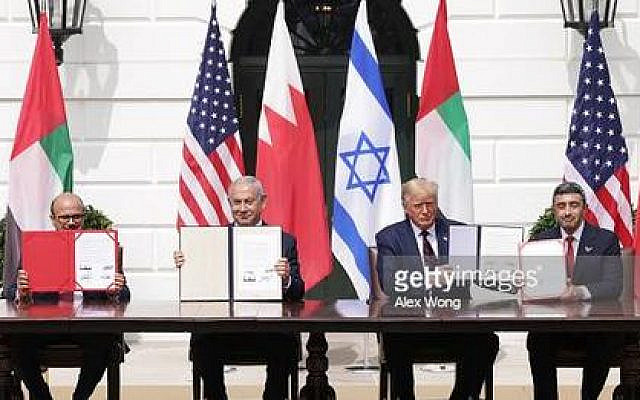 Last month we marked the first anniversary of the Abraham Accords that normalized relations between Israel, Bahrain and the United Arab Emirates (UAE). Since then, Israel has signed normalization agreements with Morocco and Sudan. These four Arab countries, together with Egypt and Jordan, represent great hope for the future of the Middle East. In order to nurture that hope, the international community must unite to confront Iran and its destructive behavior in the region. To do that, it is first important to see the big picture.

Too often, when violence breaks out in the Middle East, there are very few analysts who are able to connect the dots and help us understand the wider regional context. The most recent round of fighting between Israel and Hamas in Gaza in May is just one example. In what became known as Operation Guardian of the Walls, many Western analysts reverted to the simplistic explanation by calling it, “another cycle of violence”.

By failing to connect Gaza to the larger regional context, analysts and governments are inadvertently inviting future “cycles of violence” and missing an opportunity to create peace across the wider Middle East.

In a recent discussion marking the first anniversary of the Abraham Accords sponsored by the Washington Institute, New York Times columnist Tom Friedman used a phrase that provides a practical paradigm for understanding a very complex region: “zones of order”.

Friedman said, “Israel is surrounded by states that are collapsing… The zones of order and the nations of order need to be collaborating to produce order in the region”.

The six Arab countries that have normalized relations with Israel represent the “zones of order”. By stark contrast, there are other countries that represent chaos and disorder. In referring to countries like Lebanon, Iraq, Syria and Yemen, Friedman said that we are looking at “zones of disorder” in failed states.

The common denominator between these failed states is the dominant role of proxy forces supported by Iran. In Lebanon, it is Hezbollah. In Iraq, it is Kataib Hezbollah and Asaib Ahl al-Haq, and in Yemen it is the Houthi rebels. And though it is not an independent state, I would add Gaza which is controlled by Hamas and receives extensive financial and military support from Iran.

In Syria, since the outbreak of the civil war in 2011, Iran’s Islamic Revolutionary Guard Corps (IRGC), together with Hezbollah and other proxy forces, played a central role in propping up the brutal dictator Bashar-Al Assad. The human cost of Iran’s role in the Syrian tragedy is more than 500,000 dead Syrians, five million refugees and another failed state.

This is not the first time that Tom Friedman has used the concept of “forces of order and disorder” in understanding the Middle East. He first introduced the concept in an article published in the midst of the Second Lebanon War launched against Israel by Hezbollah in 2006.

In the article he concluded by writing, “The forces of disorder — Hezbollah, Al Qaeda, Iran — are a geopolitical tsunami that we need a united front to defeat. And that united front needs to be spearheaded by American leaders who understand that our power is most effective when it is legitimated by a global consensus and imbedded in a global coalition.”

Sadly, since Tom Friedman wrote those words in 2006, not much has changed.

Iran continues to pursue its radical regional agenda based on “exporting the Islamic revolution” and building the “Axis of Resistance” to the existence of Israel. In the meantime, the members of the European Union want a resolution to the standoff over Iran’s nuclear program in the hope of lifting economic sanctions in order to renew business with Iran.