What Winston Churchill said about Russia—it’s a riddle wrapped in a mystery inside an enigma—would be an understatement applied to Syria today.

That combustible, confusing mix helps sustain the tragedy. It also makes attempts to delineate who is on which side, and which side(s) one should “root for,” a dizzying exercise.

An emerging, dangerous development is that as the Syrian government and its allies consolidate their military victories, some of those allies are now pivoting their aim onto their ultimate target: Israel.

Syria’s key allies are Russia, Iran and its proxy Hezbollah. To be sure, those external players have interests in how the Syrian quagmire is resolved. They also have a full share of blame for the mayhem. But for Tehran and its client Hezbollah, Syria is very much about exploiting the civil war and eventually transforming the ensuing chaos into a launching pad against America’s key regional ally, Israel.

Israel has studiously, largely kept out of the raging civil war on its northern border. The Jewish state’s most noteworthy response has been treating thousands of injured Syrians who are able to make it to the border and receive top flight medical assistance. Israel has directly intervened only to intercept the flow of weaponry aimed against it (a flow that is in direct violation of U.N. Security Council resolutions that ended the 2006 Israel-Hezbollah war and to preempt Iran’s ever-growing escalation of forces.

The encroachment in February of Israeli airspace by an Iranian military drone armed with explosives launched from Syria was the most flagrant example of Tehran’s aggressive intentions. (A textbook definition of irony: in 2011 when it captured a U.S. drone, Iranian General Hossein Salami insisted, “It makes no difference where this drone originated, and which group or country sent it to invade our airspace. This was an act of invasion and belligerence.”) 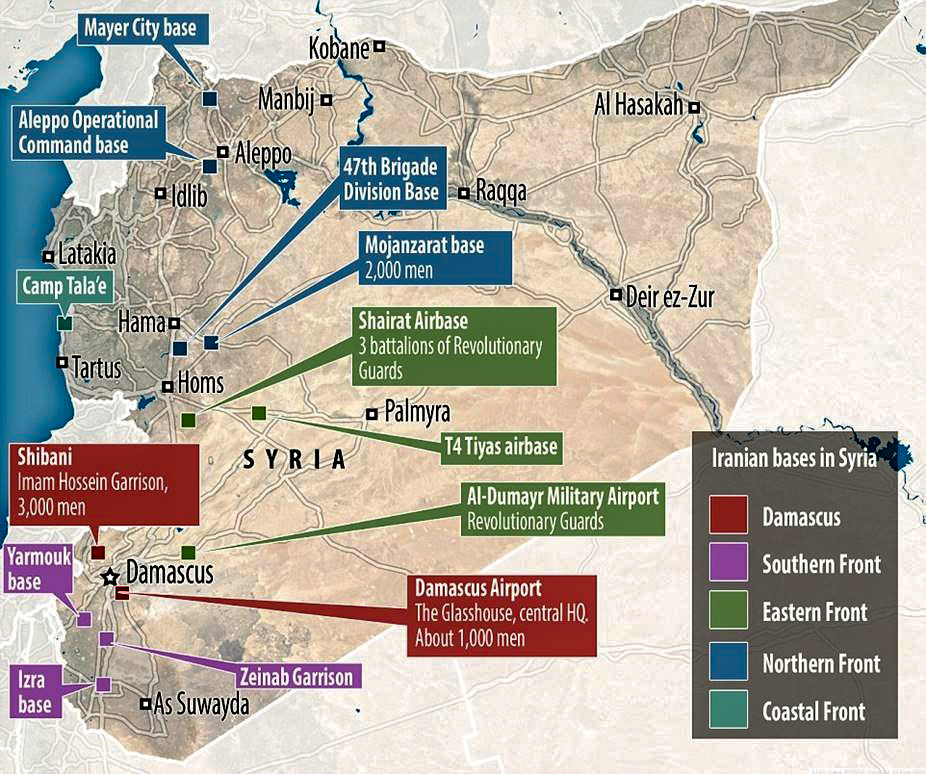 As is often the case, Israel is the proverbial canary in the mineshaft: Iran has its short-term sights set on Jerusalem, but its longer-term target is an uncontested land bridge—via allies in Iraq and then across Syria and Lebanon to the Mediterranean and ever closer proximity to Europe. This represents a clear threat to our European and other allies (including Egypt). So far, Iran has demonstrated a will to advance its goals infinitely greater than either the West, the U.N., the Arab League or the Organization of Islamic Cooperation have mustered the will to resist.

As Syria hopefully moves towards a less violent future, the nefarious plans of Iran and Hezbollah from within Syria against Israel imperils those hopes. Iran, the world’s biggest state supporter of terrorism and Hezbollah, a global terrorist force since it murdered 241 Marines in Beirut 35 years ago, are all-too-happy to fight Israel at the expense of Syrians (and Lebanese for that matter).

Israel, understandably, cannot countenance such an imminent threat on its very doorstep. Iran in Syria today threatens Israel in ways proximate to how Soviet missiles in Cuba in 1962 threatened our country. Just as the U.S.S.R. and its Marxist worldview saw the U.S. an eternal, implacable foe, Iran and its radical theology has vowed—and taken steps towards — “wiping Israel off the map.”

Israel has sought U.S., U.N., and Russian assistance in de-escalating the tense standoff with Iran in Syria. But Tehran remains defiant and itching for a fight. Meanwhile, Russia plays a multi-dimensional chess game, the U.N. sends “observers and peacekeepers” who only observe there is no peace to keep, and U.S. policy is at best evolving, at worse devolving.

Just as J.F.K. said during the Cuban Missile Crisis that he would pursue peace but not shrink from confronting a clear and present danger, so too does Israel find itself seeking peace while across a narrow passage an Iranian menace looms.

For the sake of peace, and America’s vital interests in the region, let’s hope peace prevails in Syria—but not one imposed by the tyrants of Tehran.

Achieving that goal is akin to solving a riddle of Churchillian proportion.