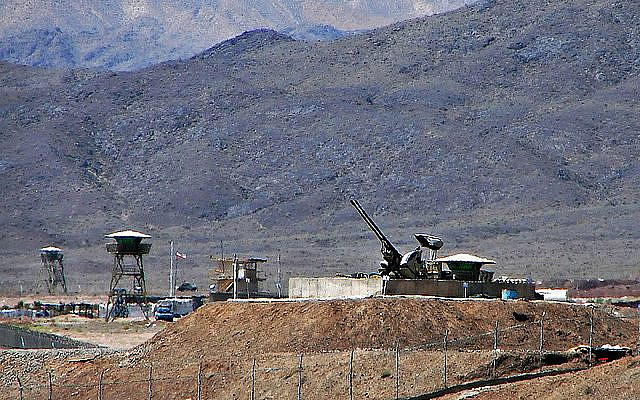 With a new Democratic administration set in place in the United States, (and the same, old Iranian regime), prospects for a newfangled version of the JCPOA (Joint Comprehensive Plan of Action) are on the table. But what is in the best interest for the United States, and their ally, the Jewish State of Israel? Negotiators from both the Islamic Republic and the U.S. met in Vienna on Thursday. On Sunday, April 11, a cyber attack on Iran’s nuclear facility in Natanz, shut down the facility’s grid, temporarily, and ruined a handful of centrifuges. In response, on Friday, Iran boasted it would upgrade its uranium enrichment to 60 percent — its grossest level ever — (that’s thirty below ‘weapons-grade’, and 40 above its agreed-upon maximum); loyalists of the Ayatollah and the Revolutionary Guard cheered in the streets. As for the attack on Natanz, all fingers pointed at Israel, at least in the Islamic Republic.

Wednesday, April 14, one day prior to the bilateral negotiations in Vienna, an explosives-laden drone was activated at the Erbil International Airport in Iraq, adjacent to a base hosting U.S. troops. According to reports, a U.S. soldier and a foreign contractor sustained injuries in a prior rocket attack at the same base. All fingers point to Iran-backed Iraqi militants. In the middle of last month, at least seven rockets were launched at the al-Balad Base, near Baghdad.  Prior to that, 10 rockets were launched at the Ain al-Asad Base.

Iran goes into a national election in June. It is expected that a new hardline president will take the place of Hassan Rouhani, who is considered by the Islamic public-sphere as being ‘middle-of-the-road’. Nevertheless, Iran seeks a relief in economic sanctions imposed mainly by the Trump administration. Their reason for flexing their muscle, firing rockets at Iraqi and U.S. troops, and upgrading uranium enrichment, is to gain leverage in the current and upcoming negotiations with the United States, about reentering the JCPOA (an Obama-era accord), or something like it. This being the case, if it means Tehran will return to a capacity of 20 percent uranium enrichment, in exchange for subtle sanctions relief; it still wouldn’t be worth it. And there are two reasons. We can’t forget about the Iranian-backed militias in Syria, Lebanon, Palestine, Yemen, mainly and recently, most dangerously (for the U.S.), in Iraq. If Biden, Blinken, and the other diplomats are back at the negotiating table with Tehran, not only must they demand complete cessation of anything near weapons-grade uranium enrichment, but as well as utter cessation of proxy interests in the Middle East, North Africa, and beyond.

The more and more talks in Vienna seem to fail — with Ayatollah Khamenei kicking and screaming that it won’t work, while U.S. diplomats (perhaps foolishly), rack their brains to devise a way to salvage it; the more it becomes evident: even if the U.S. administration strikes a deal with Tehran to curb its nuclear program, the Iranian regime will still attack Israel and perhaps American interests in Iraq. They’ll still fund Hamas and Hezbollah, et cetera, and this should be unacceptable. That is why the JCPOA, or something like it, does not make sense — is not sturdy. Yet, if the United States maintains its — or imposes new sanctions on the Islamic Republic, chances are the Iranians will just cheat their way into Chinese money, skirting the sanctions by conducting under-the-radar natural, domestic oil trades with private foreign interests, such as the aforementioned Chinese (and perhaps the Russians, to whom Iran shipped 25,000 lbs. of enriched uranium, for safekeeping, in 2015, at the dawn of the original structure JCPOA). And this is the second reason reentering the JCPOA or relieving sanctions won’t work. According to a report in the International Energy Agency, Iran’s estimated oil sales to China in the fourth quarter of 2020 were counted at 360,000 barrels per day, which was up from an average 150,000 barrels shipped daily in the first nine months of last year. In March of 2021, exports to China were estimated to be 600,000 barrels per day. Sanctions, therefore, don’t appear to be hurting the Iranian regime at all.

China received a daily average of 557,000 barrels of Iranian crude between November ’20 and March ‘21, or about five percent of total imports by the world’s largest importer, returning to levels before ex-U.S. President Donald J. Trump re-imposed sanctions on the Islamic Republic in 2019, according to Refinitiv Oil Research. The majority of this oil ended up in the eastern province of Shandong, (China’s hub for independent refiners).

If Iran wants its twenty percent enriched uranium, it must not only agree to curb its secret nuclear activity and long-range weapons development, but it must withdraw its terror funding, and proxy militias, from all over the world and finally, it must recognize and maintain peace with Israel.

About the Author
Scott Shlomo Krane has been blogging for TOI since February 2012. His writing has also appeared in The Atlantic, Tablet, Ha'aretz, The Jerusalem Post, the Daily Caller, JazzTimes and he will be the host of a forthcoming blog on AllAboutJazz.com. Scott was a columnist and breaking news editor for Arutz Sheva-Israel National News (2011-2013). In addition to holding a degree in Judaic Studies and a Master's in English from Bar-Ilan University (for which he wrote his thesis on the poetry of American master, John Ashbery), he has learned Judaism at Hadar Ha'Torah Rabbinical Seminary in Brooklyn.
Related Topics
Related Posts
Comments