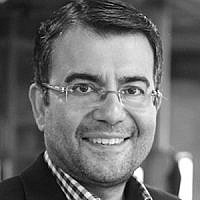 The Blogs
Nima Rashedan
Apply for a Blog
Please note that the posts on The Blogs are contributed by third parties. The opinions, facts and any media content in them are presented solely by the authors, and neither The Times of Israel nor its partners assume any responsibility for them. Please contact us in case of abuse. In case of abuse,
Report this post.

Organized gangs are kidnapping Iranian citizens in order to take out their organs to sell them, the deputy chair of the judiciary committee of the Iranian parliament, Yahya Kamalipour, told journalists.

”Children, especially orphaned children are being identified and then kidnapped by criminals for their body parts” he confessed.

The existence and expansion of an underground human-organ market in Iran has been the subject of hundreds of reports by Iranian journalists and bloggers despite security forces warnings against publication of any report that portrays the Islamic Republic negatively. Iran’s deepening national health crisis seems to be causing an increasing demand for human organs such kidneys and liver. According to official Fardanews portal, Iran is experiencing a 15-20% surge in cases of kidney failure and only less than 20% of transplanted kidneys are from brain-dead patients which can indicate up to 80% share for underground organ market. 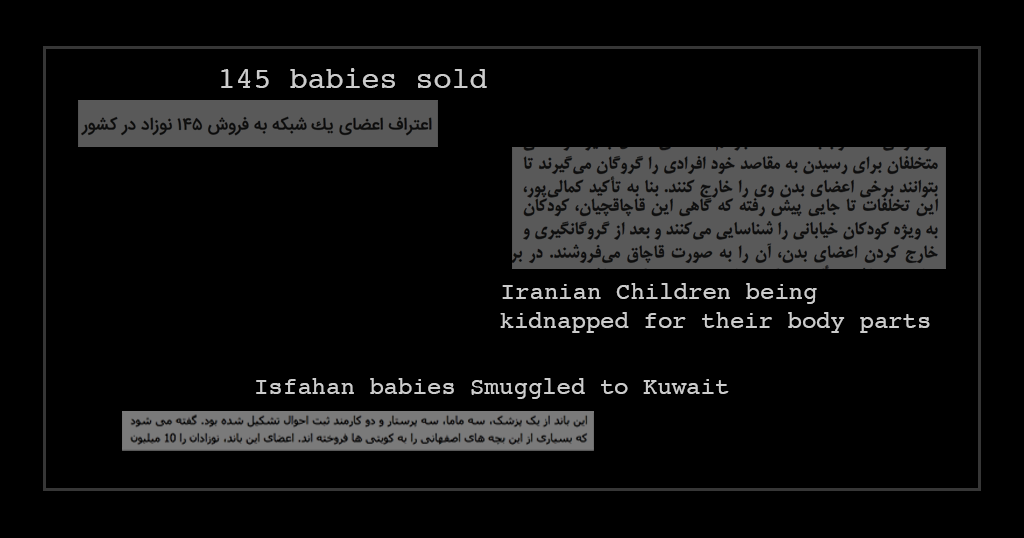 In addition to Iran’s increasing internal demand for human organs, several reports including official announcements are indicating toward the existence of a vast organ trafficking network for markets such as Turkey, Dubai and Malaysia. Based on reports by several Children Rights groups in Tehran, orphaned street children are being kidnapped and smuggled to destinations like Turkey to be sold as organ donors.

Reports of organized kidnapping or harvesting babies for sale have been published even in Iranian state media for a very long time. With involvement of Physicians, nurses, midwives and officials from several departments, gangs were able to obtain official birth certificates for babies who were either kidnapped or bought from their parents who are mainly poor, homeless or drug addicts. Dozens of homeless pregnant women who were arrested by police were wrongly told by health officials their healthy unborn babies had died, when the babies have been given new birth certificates and sold.

In a well-known case from Isfahan, Iran’s third largest city, 145 babies have been illegally sold by health officials for a price of around US $2700. Some of those children were smuggled to Kuwait and no information can be find on their whereabouts and conditions. 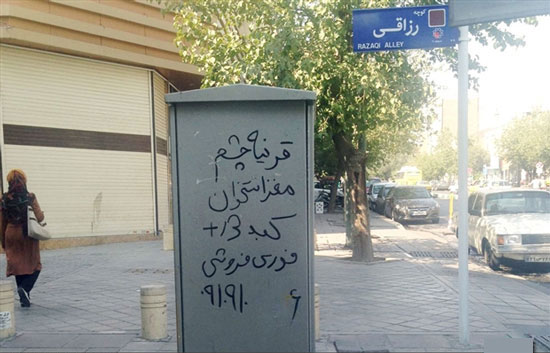 Apart from organized crime, people deliberately selling their own body parts is a long accepted reality when it comes to Islamic republic of Iran. Social media users have been posting hundreds of handwritten street signs, in which Iranian citizens are offering their own body parts for sale. The sale price is usually not even indicated and seems negotiable. According to journalists who contacted the Ad posters, The sellers are offering one of their own kidneys, eye retinas, bone marrow or part of their liver in exchange for cash. A quick search in Persian social media brings up hundred of organ-selling photos including a famous photo of workers from Ahwaz pipe factory in southern Iran who haven’t been paid for months carrying sings offering fiver kidneys for sale in order to survive.
In reaction to dramatic news on sale of human organs in Iran mainly because of poverty and social exclusion, majority of Persian-speaking social media users blame the government policies. The most frequent comment up voted by thousands of users is asking the Iranian government to stop wasting Iranian money in Syria and Lebanon.

Instead they want the government to create jobs for it’s own people in order to prevent them from being forced to sell their eyes, livers and kidneys.

About the Author
Nima Rashedan was among the first Iranian cyber-activists. In 1998 as pro-democracy journalist he was arrested and served time in Tehran's notorious Evin prison, including a month in solitary confinement. After his release, Rashedan immigrated to Switzerland. He now lives in Central Europe and continues his work as a dissident and advocate. A frequent focus of his work is the similarity between the methods and objectives of the current Iranian regime and those of the former Soviet Union.
Related Topics
Related Posts
Comments