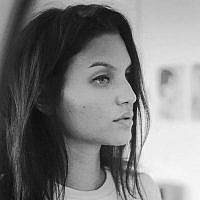 The Blogs
Kitty Herweijer
Apply for a Blog
Advertisement
Please note that the posts on The Blogs are contributed by third parties. The opinions, facts and any media content in them are presented solely by the authors, and neither The Times of Israel nor its partners assume any responsibility for them. Please contact us in case of abuse. In case of abuse,
Report this post.

Today marks Quds day, a day initiated by the founder of Islamic republic of Iran, Ayatollah Khomeini, after the Islamic revolution in 1979 to unite Muslims by opposing the state of Israel. Every year on this day masses of people, led by all political fractions from reformists and moderates to the hardliners, gather in the streets of Tehran to call for the annihilation of the Jewish state.

Iran is a state sponsor of Hezbollah ($75 million a year), Islamic Jihad ($70 million a year) and Hamas ($50 million a year), three groups violently aiming for the destruction of Israel. However, a large section of the Iranian people do not support this anti-Semitic behavior. Iranian activists started a Twitter campaign using the hashtag #NoHateToday to condemn the annual day of hate and send a message of love and support to the Jewish people and friendship between Iran and Israel. A message we have witnessed earlier during the tensions over Iran’s nuclear program in 2011 with the Facebook pages Iran loves Israel (32.632 likes) and Israel loves Iran (120.912 likes).

Dear friends around the world. Please join us on #NoHateDay and write about love. Listen to us. We want peace ✌️ 🇮🇱 ❤️ pic.twitter.com/LwxRBGyxC1

The day will come that we will tie Iran’s true flag with Israel’s flag and achieve peace in the Middle East, when love will win.#NoHateDay pic.twitter.com/jBaOqXQsA9

The actions of these brave activists echo the better days in Israel-Iran relations during the Shah era. Days in which Israel and Iran worked together extensively. Thousands of Israelis lived in Iran during the Shah era where they worked side by side to help modernize the country and build advanced irrigation systems for Iranians. A few years ago Israeli filmmaker Dan Shadur, who spent the first years of his life growing up in Tehran, made the documentary Before the Revolution about this golden era in Israel-Iran relations.

But Israel and Iran were not only states that once had good relations; Jews and Persians have a deep history of unity. Jews have been present in Iran for about 2,700 years and the community is considered to be one of the world’s largest and longest-established Jewish communities. During the Holocaust an Iranian diplomat serving in Paris, Abdol Hossein Sardari, risked his life to help Iranian Jews escape the Nazis. It is estimated that he saved thousands of lives and he has been named the ‘Schindler of Iran.’

While it is no surprise anti-Semitic sentiment is widespread throughout the Middle East, according to the Anti Defamation League, Iran ranks as the least anti-Semitic country in the region with an anti-Semitic sentiment of 56 percent. Taking into account that the government in the past 38 years has been propagating nothing but hate towards Jews and ‘Zionists,’ we can conclude the ayatollahs have certainly not been as successful as they would have liked. In comparison, neighboring countries sentiment lies around the 80 to 90 percent mark in anti-Semitism. While the Jews in most Middle Eastern countries have been expelled in the past decades, in Iran a community of twelve thousand Jews still exists today.

The Twitter hashtag proposed by these young Iranians #NoHateDay sends the message that peace and friendship is hopeful. We should support this message and welcome its intentions. The Iranian people are our friends, not our enemies. The real enemy is the Islamic Republic regime in Tehran who needs hatred and anti-Semitism to call for unity inside its regime.

Iran & Israel are natural allies and partners. A free democratic Iran will have no better friend than Israel in the region.#NoHateDay pic.twitter.com/LCKIYRvxUh
— AmirHossein Etemadi (@amiretemadi) June 23, 2017

The Iranians who are loudly making their voices heard, and sometimes even taking great risks in doing so, deserve our continuous support. I certainly hope that, one day, when the ayatollahs and their apparati are layed to rest we will be able to take a direct flight from the beach sides of Tel Aviv to the mountains of Tehran to visit our friends in Iran. The current Islamic regime must be viewed as a hiatus between a much longer bond between two nations that reaches far into the past; Jews and Persians.

About the Author
Kitty Herweijer is a Dutch writer holding a bachelor degree in political science. She has lived in Israel, interning at the Begin-Sadat Center for Strategic Studies and is currently pursuing her graduate degree in Middle-Eastern studies at the University of Amsterdam.
Related Topics
Related Posts
Comments