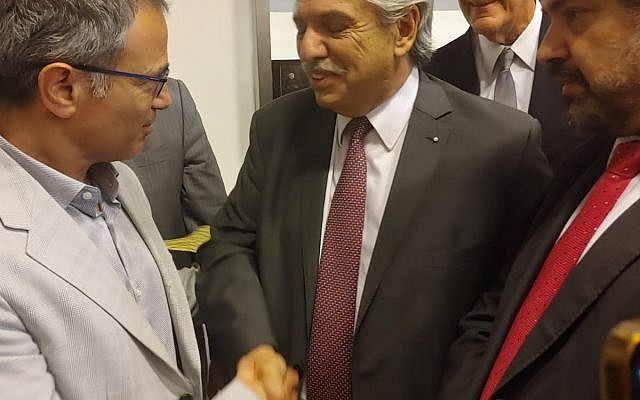 AGPI Founder & Chairman Avi Abraham Benlolo meets with Argentina's President, Alberto Fernandez. (courtesy)
While in Argentina last week, I was received with the utmost warmth and respect particularly by Argentinian government officials. Given developments concerning the so-called nuclear-negotiations now taking place in Vienna with Iran, I  believe the 30th anniversary of the bombing of the Israeli Embassy in Buenos Aires points to a dangerous world should Iran go nuclear.
Iran has been committing and supporting heinous acts of terrorism in the Middle East and around the world for years. It is responsible for war crimes committed in Syria, for supporting Hamas and Hezbollah’s hostility against Israel and for financing the war in Yemen. Iran shot down a Ukrainian airliner, killing 167 passengers, including many Canadians. It is also responsible for the horrific bombing of the Israeli Embassy and a Jewish community centre in Buenos Aires. Can you imagine an Iran equipped with nuclear weapons?
In my editorial last week in the National Post, I demanded holding Iran to account for the terrorist attack.  There is little doubt Iran is responsible, as expressed by Israel’s Minister of Justice Gideon Sa’ar yesterday at the memorial on the hallowed grounds of the blast.
The ceremony itself was solemn as hundreds of people, including local youth, gathered to remember the 29 people killed.  But one thing was clear at the memorial and through the week, all Argentinians want justice. But what does this have to do with Russia’s assault on Ukraine you ask? Everything.
Russia is destroying Ukraine with impunity and killing innocent civilians because it has nuclear weapons.  No one dare come to its rescue for fear and Putin has already warned the world he would use them.
Now just imagine what a nuclear Iran can and will do once it gets the cover of a nuclear umbrella. Iran has been committing and supporting heinous acts of terrorism in the Middle East and around the world for years.
This year’s anniversary of the bombing attack of the Israeli embassy makes the the point.  The Iranians may be sitting in beautifully tailored suits in fancy hotels in Vienna, creating an illusion of civility.  But make no mistake, an Iran guided by religious fundamentalism with a nuclear weapon is much more dangerous than even Russia. The regime has grown strident. This is why global diplomacy is critical to right-side-up this world – one of our inner mottos at The Abraham Global Peace Initiative.
While in Argentina, I was pleased to meet many leaders including President Alberto Fernandez.  I reminded him directly about how imperative the work of human rights is and the defence of freedom and democracy. Similarly, my meeting with Secretary of Worship, Ambassador Guillermo Oliveri was important in advocating against Antisemitism and for the purpose of religious freedom. We already have a plan!
Even while we are here in Argentina, our heart cries out for the innocent people of Ukraine. But we need to advocate in tandem – helping the people of Ukraine (which we are); speaking out against Russia’s heinous assault (which we are) and of course, reminding the world that an Iran with nuclear weapons would be a bad addition to this already dangerous world.
Change in the world happens by being present. I was proud to stand alongside Argentinians in memoriam of the victims of the attack and in condemnation of Iran.
About the Author
Avi Abraham Benlolo is the Founder and Chairman of The Abraham Global Peace Initiative (AGPI) He has been described as the nation's most prominent and noted expert in Holocaust studies, in countering Antisemitism and promoting human rights.
Related Topics
Related Posts
Comments