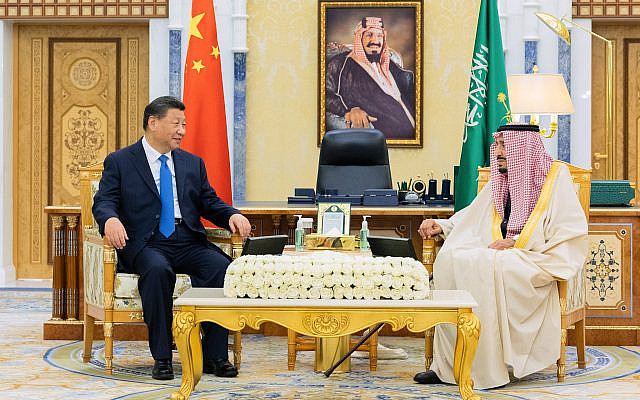 With China cosying up to Saudi Arabia and the GCC states, Iran is now questioning China’s commitment to it.

Iran feels ditched by China The Iranian Foreign Ministry called in, Chang Hua, the Chinese Ambassador in Tehran to express its “strong discontent” over the Joint Statement issued after the meeting of China and the Gulf Cooperation Council (GCC) held on 9 December. While officially, the Chinese Ambassador was not “summoned”, he was certainly hauled over the coals by the Iranians.  The Joint Statement referred to Iran as a supporter of regional terrorist groups and a proliferator of ballistic missiles and drones. More damaging, the statement noted the importance of addressing “the Iranian nuclear file and destabilising regional activities”.

China’s recent embrace of Saudi Arabia and other GCC nations has sent a warning signal to Tehran which till now had believed that China had taken a neutral stand in Iran’s rivalry with Saudi Arabia in the Gulf region. The nub of the matter for Iran was mentioned in the Joint Statement of three islands located in the Strait of Hormuz, Greater Tunb, Lesser Tunb and Abu Mussa, all three being administered by Iran but claimed by the United Arab Emirates (UAE). The Joint Statement said: “The leaders affirmed their support for all peaceful efforts, including the initiative and endeavours of the United Arab Emirates, to reach a peaceful solution”. President Xi Jinping’s visit to Saudi Arabia in (7-10 December 2022) and the series of meetings he held have left the Iranian establishment wondering whether China is changing its attitude towards the region, especially in the wake of reduced American presence.

The challenge for Iran is that while it is clearly disappointed at President Xi’s visit to Saudi Arabia, it cannot afford to damage relations with China. The reasons for this arc primarily economic. China, till last year, was the largest import of lranian oil and both countries had signed a 25-year roadmap (March 2021) to enhance economic cooperation. Thus, the official Iranian response came from Foreign Minister Amir Abdollahian who tweeted that the islands were “inseparable parts of the pure land of Iran and belong to this motherland  forever. In the necessity of respecting the territorial integrity of Iran, we have no complacency with any side.” Iran showed concern also because the China GCC Joint Statement called for “bilateral negotiations in accordance with the rules of international law and to resolve this issue (ownership of the three islands) in accordance with international legitimacy”, which effectively undermined its stance that it would not entertain any talks on the islands.

Iran’s expression of displeasure over China’s actions led to Vice Premier Hu Chunhua (who was recently demoted at the Party Congress) flying down to Tehran. While the visit may have been planned long ago, as claimed by the Iranian newspaper Donyaye-Sanat, its timing coincided with the rise in tensions post President Xi’s Saudi visit. Hu Chunhua’s visit and meetings with President Ebrahim Raisi led Global Times to remark that the visit “could effectively help dispel some noises that arc trying to drive a wedge between the two countries.” Xinhua reported that during his meeting with Raisi, Hu said that China views its tics with Iran from a strategic perspective and will not waver in its determination to develop their comprehensive strategic partnership, noting that China firmly supports Iran in opposing external interference and safeguarding its sovereignty, territorial integrity and national dignity.

A quick perusal of reports in the Iranian media provide a glimpse into the prevailing mood within the Iranian establishment. The Jomhouri-e lslami newspaper mentioned that China’s support for UAE’s claim to the three islands received scathing criticism from Iranian politicians and experts. Another Iranian newspaper, Mardom Salari, expressed dissatisfaction with the response of the Iranian government and noted that a stronger response had been expected.

The Ebtekar newspaper said that China had tilted towards the Arab countries because of Iran’s isolation. Interestingly, Etemad newspaper argued that the new Chinese approach aimed to expand “China’ regime” across the Gulf region and it wouldn’t hesitate to trigger tensions, if needed. China has clearly decided to abandon Iran. Now that it has managed to acquire sufficient Iranian oil for its strategic reserves, it is willing to move on Page 2 of 3 and give more attention to Saudi Arabia (and become its largest declared oil importer). This was partly necessitated by US sanctions on Chinese companies involved in oil imports, from Iran. The Biden administration imposed sanctions (September 2022) on two Chinese companies involved in oil transfers. Earlier, Reuters had reported that in March 2022 China was importing more oil from Iran than it did before, mostly illegally, amounting to around 700,000 barrels per day.

Officially, China’s declared imports of oil from Iran were to zero in November 2022. At the same time, its imports from UAE and Malaysia continued to grow. This is because China used both countries as intermediaries to import undeclared Iranian oil. Where docs all this leave the much-touted 25 year China-Iran agreement signed in March 2021? The stated objective then was to enhance comprehensive cooperation in a range of fields including trade. Earlier in 2022, Iran’s Foreign Minister Amir Abdollahian had claimed that the agreement had “entered the implementation stage”, but no major contracts have been thus far, publicised as part of the deal. Although it is true that China is looking for a host of economic benefits from Iran, focused mainly on oil, Mohammad-Hosscin Malaek, a former Iranian Ambassador to China aptly surmised, in an interview to Iranian Students’ News Agency that the 25-year agreement remained a ‘dead letter’. This being the case, there is every reason to believe that China has given up Iran for the time being and is putting all its eggs in the Saudi basket. No words could better sum up the current situation than remarks made by Abdullah Kenji, editor-in-chief of Hamshahri newspaper on China’s anti-Iran position. He writes: “It is normal for China to kick us. It wants to earn the trust of the Arabs and not to provoke America.”