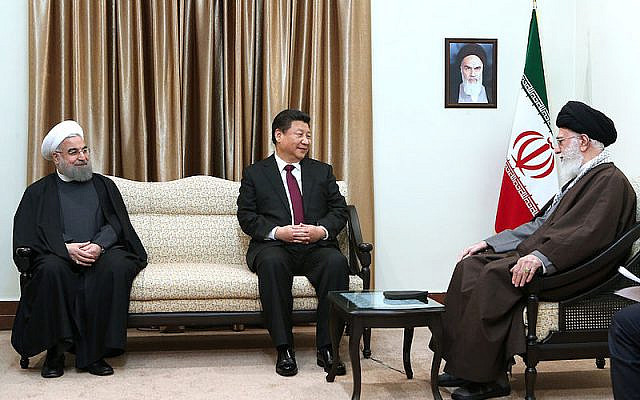 Chinese president Xi Jinping with Ali Khamenei (right) and president Hassan Rouhani. Ayatolla Khomeini is in the portrait on the wall (BICOM/Jewish News)

Iran this week announced further violations of the 2015 JCPOA nuclear deal. More advanced centrifuges will be developed, and it is reopening the notorious Fordow nuclear facility.

Iran is steadily shaking off the strict controls imposed on its nuclear programme in response to President’s Trump’s withdrawal from the deal in May 2018 and the reimposition of tough sanctions to squeeze the Iranian economy.

President Trump believed the deal was a poor way to stop Iran getting a nuclear weapon and did nothing to address wider concerns such as Iran’s ballistic missile programme and support for dangerous groups in the Middle East, such as Hezbollah. The UK has long supported the nuclear deal but Foreign Secretary Dominic Raab said on Wednesday that ‘Iran’s latest actions clearly contravene the deal and pose a risk to our national security.’

Lurking in the background, and a key player in the Iran saga is China. Much has been made of the resurgence of Russia as the real power broker in the Middle East, not least when it played a key role brokering a deal between the Kurds, the Assad regime and Turkey after the US announced its withdrawal from North East Syria. But it is China that has been hiding in plain sight, quietly arming Iran, buying its oil, boosting its economy and limiting the impact of US sanctions. 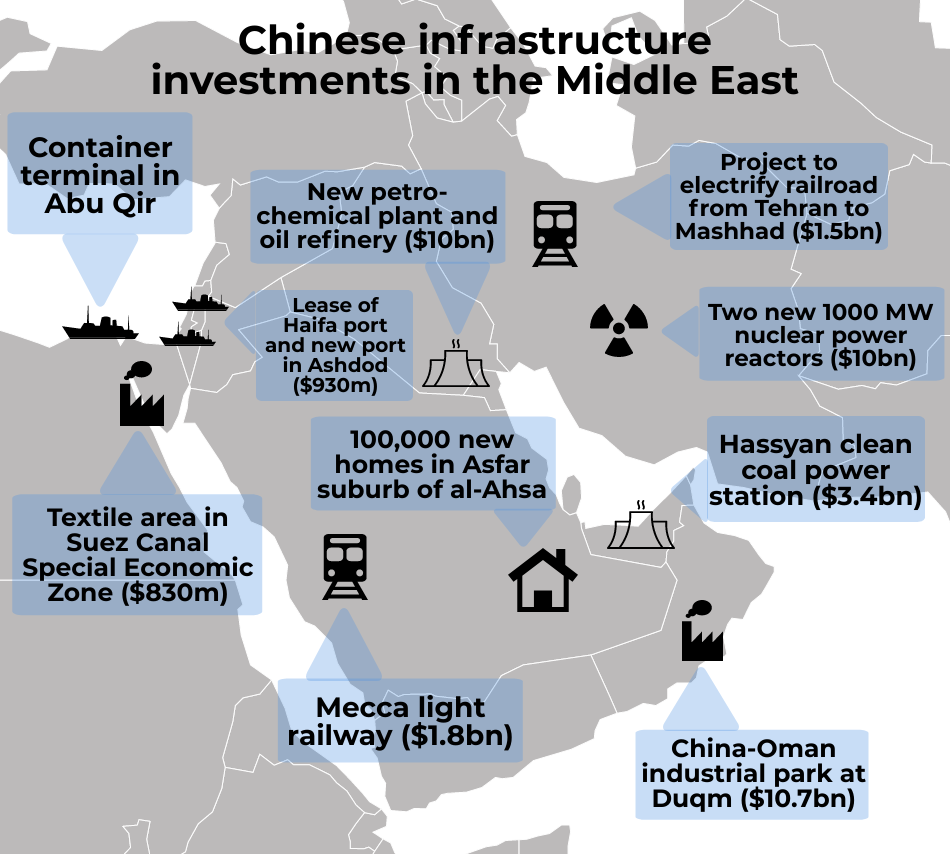 China is one of the so called P5 +1 who signed the JCPOA Iran nuclear deal alongside the US, Russia, France, the UK and Germany. It is committed to the elaborate constraints on Iran’s nuclear programme included in the agreement. In 2015 this looked like a rare piece of harmonious international diplomacy to tackle a looming threat to international peace and security.

But when the US withdrew from the agreement and sought to use sanctions to restrict Iran’s oil industry and weaken its economy, China made it clear it had no interest in complying. China prioritises energy imports to power its economy, it is the world’s largest importer of crude oil and is currently buying most of Iran’s oil. 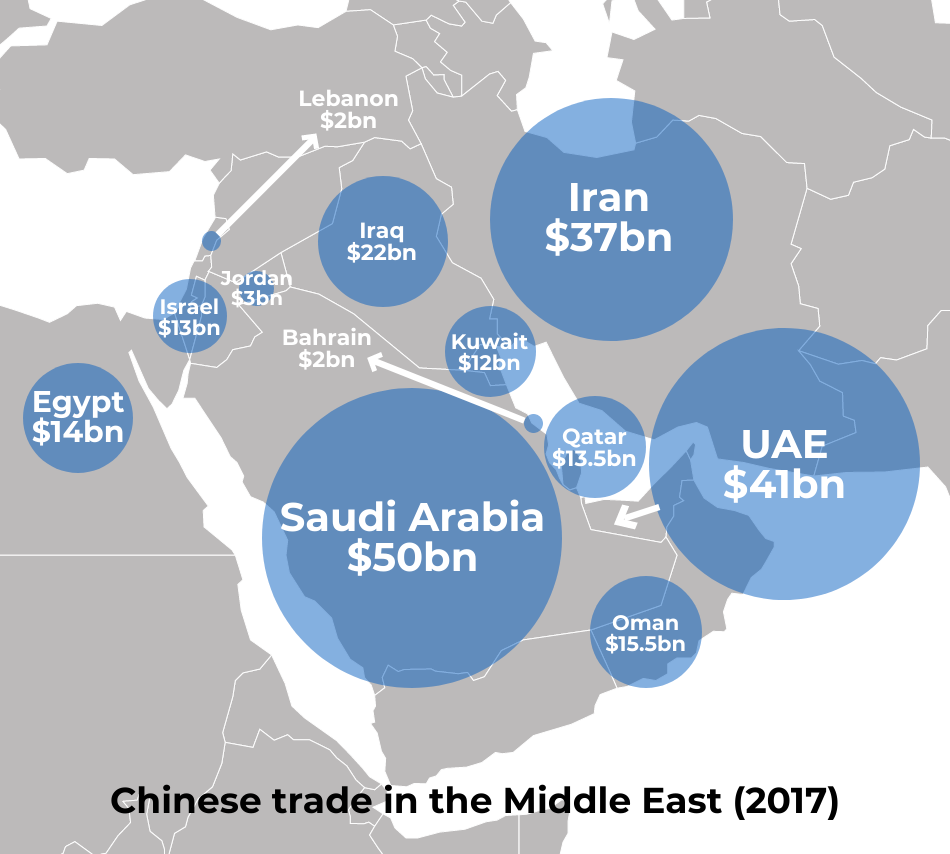 Britain shares deep concerns with the US about Iran’s missile programme, and the extent to which that missile technology is being exported to non-state actors in the Middle East. But Iran’s missile capability didn’t develop organically, it had a pivotal helping hand. In 2008, China surpassed Russia to become Iran’s biggest arms supplier and has long been providing anti-ship missiles, anti-aircraft missiles and cruise missiles to Iran. Chinese experts  supported Iran’s missile programme, helping it develop more sophisticated missiles with improved accuracy, range and payload.

In September, Saudi-Aramco oil facilities in Khurais and Abqaiq were attacked by UAVs and cruise missiles in a stunning strike that briefly crippled Saudi oil output and shocked the oil market. Although the attack was claimed by the Houthi’s in Yemen many analysts believe the cruise missiles were fired from Iran and some were an Iranian produced missile resembling a Chinese design. 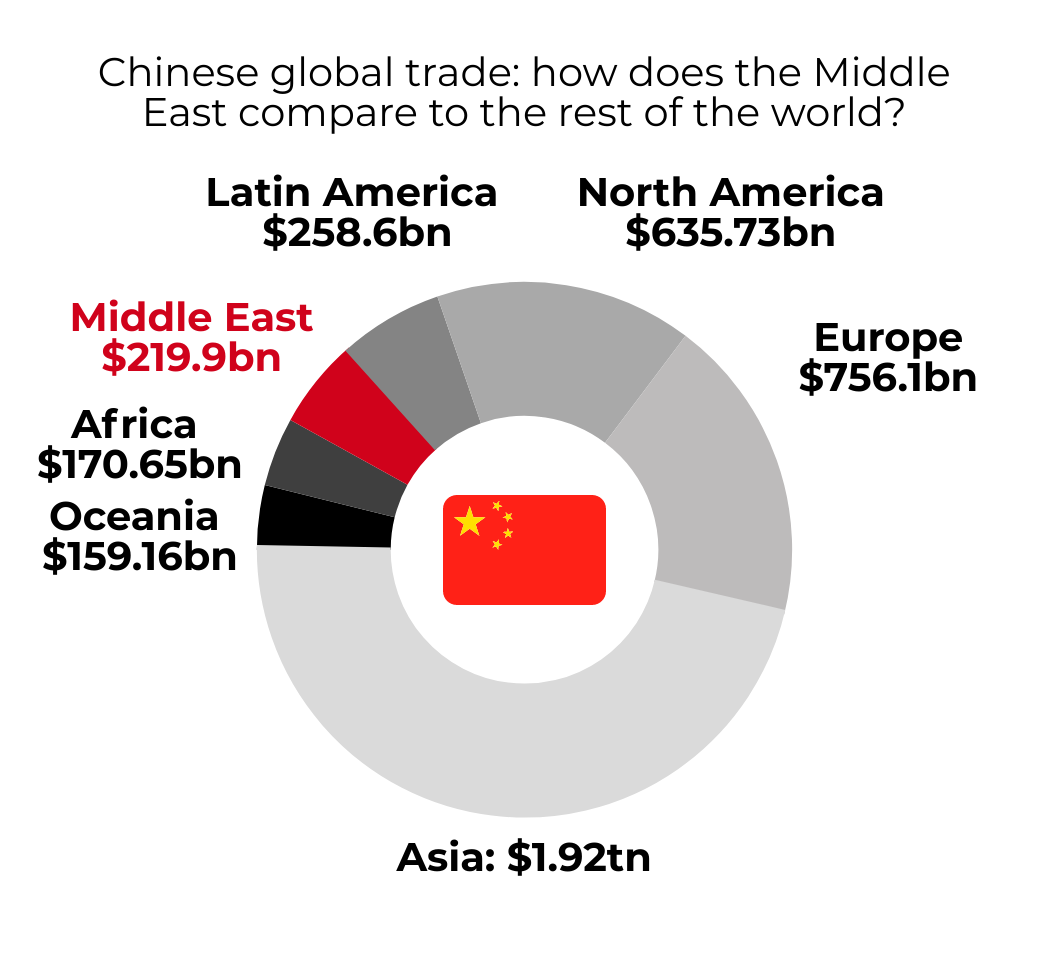 Chinese global trade: How does the Middle East compare to the rest of the world? (BICOM/Jewish News)

The Saudi attack was the long tail of a Chinese-Iranian missile development partnership that had come to fruition, presenting a new level of threat that forced an urgent reassessment of anti-cruise missile defences across the region. Even in Israel, whose aerial defences are among the most sophisticated in the world, the National Security Council studied the Saudi attack and committed extra funding to boost anti-missile systems.

Crucially China doesn’t really pick sides, instead opting to build defence and commercial partnerships that straddle the conflicts in the Middle East. China’s deep partnership with Iran is no barrier to warm relations with Israel that now includes extensive trade and even infrastructure investments in two major ports – Haifa and Ashdod.

China is the world’s largest supplier of military drones and has been exporting to Iraq, Egypt, Jordan, the UAE and Saudi Arabia. It also supplies armoured personnel carriers, anti-tank missiles and unmanned ships and is starting to present a significant challenge to the UK defence industry in a region that accounts for 60 per cent of UK arms exports.

UK trade in the Middle East, at nearly £60bn is significant, but it is dwarfed by China’s $220bn. China’s economic muscle is being utilised in its ambitious belt and road initiative which includes ports and infrastructure projects across the region.

China has become the most important trade partner and investor in the Middle East, so it is no surprise that it is a key player in Iran.

But without a proper examination of China’s role as a partner of Iran, US and European efforts to push Iran towards talks on its nuclear programme and deal with its dangerous missile programme are doomed to failure. An urgent resolution is however in China’s interests as above all it requires stability and unrestricted energy supplies.

The complex reality is that the route out of the current Iranian crisis is through Beijing, not Tehran and this is a challenge that US and British diplomats are only starting to fully comprehend.