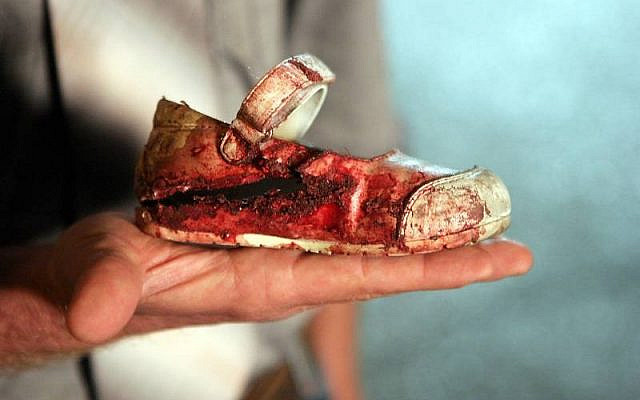 A child's bloodied shoe inside a shopping mall in Ashkelon after a missile, fired by Palestinians inside the Gaza Strip, exploded on the mall on May 14, 2008, severely injuring several Israelis, including one child and a woman, and wounding dozens of other civilians. (Edi Israel/Wikimedia Commons)

The typical Israeli response to the question of why the Israeli-Palestinian conflict continues is to point to the continued Palestinian violence against Israel. As I have written previously, I am in general agreement with that claim, but when we dig deeper, we discover that the issue is not that simple.

Both Israel and the Palestinians have engaged in violence on many occasions since Israel’s independence, and they still do. Israel claims that it is in self-defense since the Arab world refused to accept Israel’s existence and has used violence against Israel ever since. For the violence to be ethical, it also has to be proportional to the attack, i.e., it has to be no more than is required to stop the attacks, and it has to avoid civilian targets as much as reasonably possible. If we accept the claim that Israel is using violence in self-defense, then we have to accept that the violence it engages in is ethical since Israel’s attacks on the Palestinians are typically proportional and often less than proportional since the attacks on Israel often continue, and there is also evidence that Israel takes significant steps to avoid civilian casualties.

Palestinians claim that their violence is in self-defense since they see it as resistance to the occupation of their land. If we accept that premise, the Palestinians’ violence also meets the proportionality criteria since it is typically far less destructive than Israeli violence. The Palestinians, however, appear to make no effort towards avoiding civilian casualties. In fact, in many cases, they target civilians. The Palestinians who engage in violence claim that since they do not have the military capability to engage in direct military combat with Israel’s Defense Forces, they have no choice but to use alternative methods. A minority of Jews also used terrorism in the past when they were facing a much stronger adversary, such as when opposing the British in Palestine, but it was not ethical for Jews to engage in terrorism at that time, and it is not ethical for Palestinians to engage in terrorism today.

Two main wars are responsible for today’s situation, and both were the making of the Arab world.

The first was the war of 1947-49 that started with the Arab world rejecting the 1947 UN partition plan and that ended with the armistice agreement and the resulting green line. The Arab justification for that war was that there were far more Arabs than Jews in Israel/Palestine at that time (about twice as many) and therefore the UN plan was unfair and essentially an imperialist takeover of Palestine. That position was a mistake as many Palestinians today realize. The UN plan would have given the Palestinians a state on about half the land, and the Jewish state would have practically been a binational state since it included a large number of Arabs. The Arabs should have realized that due to the long history of Jews on that land and due to the Jews’ need for a safe haven two years after the end of the Holocaust, the UN plan was more than fair towards the Arabs. In the end, the Arabs’ lack of empathy and foresight cost the Palestinians dearly.

The second such battle was the June 1967 war that started with several Arab armies threatening Israel. Before that war, the Arab world could have created a Palestinian state in Gaza and the West Bank and recognized Israel instead of threatening Israel and causing a war, but the Arab world had still not accepted the defeat that it suffered in the 1947-49 war. That lack of realism cost the Palestinians a state, again.

Today, the Arab world appears to be moving towards acceptance of Israel, but the Palestinians’ own inability to find and unite behind a strong and non-violent leader has allowed the conflict to continue.

The Palestinians must realize that terrorist violence is both morally indefensible and ineffective. The sooner they do that and unite around a leader who will negotiate a peace agreement with Israel, the sooner they will have a viable state. If Palestinians fight Israel through diplomacy, they will have far more allies and they will be far more effective than they have been in using violence. Israel’s behavior, however, whether due to design or due to incompetence, is not generally conducive to Palestinians coming to this realization.

This indicates a tacit alliance between Israeli extremists and Palestinian extremists who are both in charge right now. The actions of Israel’s right-wing government benefit Palestinian terrorist recruiting, and Palestinian terrorist activity allows Israel to claim that it has no peace partner. Both sides are satisfied with the result which is that the two-state solution becomes less and less likely. Of course, the ultimate goals of the two groups are diametrically opposed. Israeli extremists expect that Palestinians will forever be confined to Gaza and a few disconnected enclaves in the West Bank under the close watch of Israel’s security forces. Palestinian extremists expect that Israelis will become discouraged enough that many will leave so that the Palestinians will achieve victory either through violence or through demographics.

Both of these long-term goals are unrealistic but since most Palestinians appear to think that they have nothing to lose, the hope of that long-term goal, no matter how unlikely, sustains Palestinian extremists who are willing to fight for as long as it takes, over multiple generations if necessary.

Unless Israel can help change the mindset of most Palestinians, this state of endless wars is the future that Israel should expect for itself. While right-wing politicians may be willing to accept such a future as the price to pay for having more land, I suspect that most Israeli families, who are the victims of terrorism and who must continue to send their children to risk their lives in endless wars, would prefer a different future.