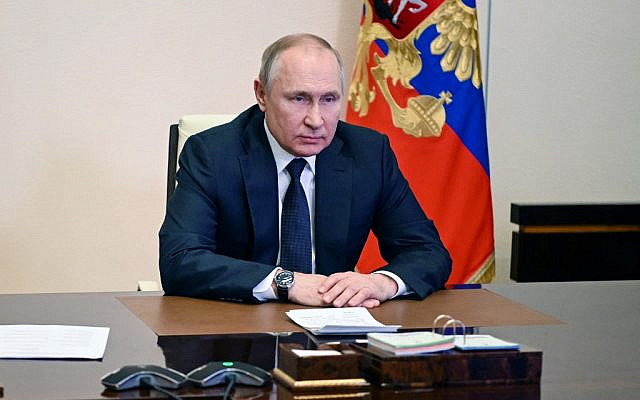 Russian President Vladimir Putin chairs a meeting with members of the Security Council via teleconference call at the Novo-Ogaryovo state residence outside Moscow, Russia, on March 3, 2022. (Andrey Gorshkov/Sputnik/AFP)

Perhaps Haman is not the most dangerous man in the Purim story. He is a wicked man and his intent is clear. He wants to destroy the Jews. However, he is not necessarily the most dangerous man. Achashverosh is portrayed in the megillah as someone who is trying to replace God. The megillah describes a big celebration when everyone from around the world comes to the capital to celebrate at the palace. Isn’t that also the messianic vision of a time when the nations will come to visit the Temple and celebrate with God for many days? The megillah also describes a time when the king says that one can only enter the inner chamber if the king summons him and if someone enters that chamber without permission, then that person will be put to death. Isn’t that also the story with the kohen gadol (high priest) who may only enter the Kodesh HaKodashim (Holy of Holies) at the right time, or else he will die? The megillah describes a world where Achashaverosh seems to have replaced God and to hold all the power.

What makes Achashverosh so dangerous is that he holds all the power, both at the beginning of the Purim story and at the end of the Purim story, and he acts on the whims and wishes of whatever people say. He makes life and death decisions like killing Vashti when he is drunk. As long as someone flatters him, then he will do as that person says, whether it’s Haman, Esther or another minister. Achashverosh has no backbone. He simply is a vain king who has all the power to do what he wants and he does what he wants without any regard to reason, ethics and morals. That is very dangerous.

Achashverosh is a king that wants to reward Mordechai the Jew for saving his life, so he commands that Mordechai should be paraded all over town, when in fact he plans on having him killed in a few months with all the rest of the Jews. Does that make any sense? Additionally, even after Haman and his 10 sons are killed, when I would have thought that the Jews won and it should be a time to celebrate, the decree against the Jews remains in effect because it is against the custom for the king to cancel the edict. Of course, that sounds ridiculous, but the king does not annul the decree; rather, he must issue a pro-Jewish edict and a battle between the Jews and their enemies is still scheduled to take place — almost a year after Haman is killed.

Maybe the point of the megillah is to make us aware of the fact that sometimes there are dangerous people who may not seem on the surface to be dangerous, who may appear to be very statesman-like, but they really are very dangerous. How does the story end? The story ends with Mordechai becoming second to the king. He needs to do that because the king was, is, and will remain a very dangerous and powerful man. Mordechai decides that the best way to deal with him is to become an officer and adviser in the king’s court and hope that he is able to prevail upon the king to make good decisions in the future.

The story of Purim contrasts two wicked people, Haman and Achashverosh. We destroy Haman and we negotiate, flatter, and appease Achashverosh. We destroy Haman because we can and because he clearly intends to destroy us. We negotiate with, flatter, and appease Achashverosh because we cannot destroy him and he does not necessarily want to destroy us. He just wants to do whatever he needs to do to feed his ego.

How should the world relate to Russian President Vladimir Putin? Should they relate to him as a Haman or should they relate to him as an Achashverosh? The international intelligence community has been struggling with this question. Is the Ukraine invasion a sign that Putin is being flattered and advised by his inner circle that doing this will increase his prestige and his legacy, or is the invasion part of a grand strategy to return Russia to its glorious imperial and Soviet Union days and reestablish it as a superpower once again? Until the recent Ukraine invasion, much of the international community for the most part viewed Putin as an Achashverosh, as someone who was very powerful and someone with whom we could negotiate in goodwill. The international community now sees someone who wants to seize the opportunity to return Russia’s sense of pride and place in the world, and he will not be appeased away from doing that.

Israel has good relations with both Ukraine and Moscow, and Israeli Prime Minister Bennett flew to Moscow this past week to sit with Putin in the hopes of mediating between the two countries. If he can broker a deal that is fair to Ukraine, that is certainly in everyone’s best interests. Putin’s recent aggression has demonstrated that, like Achashverosh, he is one of the most dangerous people in the world. However, he has recently shown that he is not Achashverosh. Like Haman, he is someone who has a distinct destructive ideology that he wishes to implement that will cost the lives of innocent men, women, and children. Like Haman, he is someone who cannot be flattered into withdrawing from Ukraine.