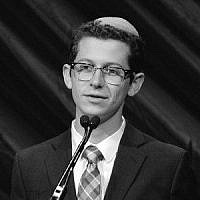 The Blogs
Jordan Lustman
Apply for a Blog
Advertisement
Please note that the posts on The Blogs are contributed by third parties. The opinions, facts and any media content in them are presented solely by the authors, and neither The Times of Israel nor its partners assume any responsibility for them. Please contact us in case of abuse. In case of abuse,
Report this post.

Nearly every time there is a terror attack perpetrated by Palestinian-Arabs against Israeli Jews, I always look forward to reading the statements made by either the State Department, Secretary of State, or the President of the United States. For, nearly every single time there is an attack that one of the three comments on, they say something to the extent of, “These attacks were carried out by people who do not represent the majority of the Palestinian population. We condemn the attacks,  […] but  -extra embellishment on the “ut” sound- we call on Israel to do x, y, and z.” Now, could this be because the United States expects Israel to act as the, “Bigger man” in the current conflict? Sure, but that’s a very shallow interpretation of their statements. By the end of this blog post, you’ll know what their comments actually mean.

In my mind, relations between Israel and Washington are at an all time high. Congress is extremely pro-Israel; while Congress can’t come together on many issues, Israel is the one issue that both Democrats and Republicans see eye-to-eye on. However, while relations between Israel and Washington are positive, relations that Israel may have with the White House are not necessarily such. Israel is, time and time again, blamed by the White House for next to everything in the book. This includes, according to our wonderful Secretary of State John Kerry, recruitment for ISIS. The White House even criticizes Israel for the things that they, themselves, do not do (such as preventing civilian deaths in airstrikes, which, if you’ve lived under a rock for the past century and do not know this, Israel takes extra steps to do).

Israel is, by nature of its being a democracy, against terrorism. Israel is considered by many to be the world’s leading expert in counter-terrorism measures; if terrorism were to be scared of one country in specific, that country would be Israel. Israel is the enemy of terrorism. Israel consistently takes direct action against terror, which includes but is not limited to airstrikes, artillery strikes, and, when all other options are exhausted, ground operations. However, Israel also takes great care to avoid civilian casualties. Israel drops leaflets, makes phone calls, sends text messages, and announces, through smaller explosions known as “Knock-on-the-roof” strikes, of impending air-strikes to a certain area. Israel even aborts strikes after missiles have been launched if she feels too many civilian casualties will result.

In Israel, there are car attacks, stabbings, shootings, molotov cocktails attacks, rock attacks. Israel and the United States have a common enemy: terrorism. The enemy of terrorism is Israel. So Israel, the enemy of America’s enemy, which is terrorism, should be at the very least treated as America’s best friend.

In a study done by Nadav Goldschmied at the University of South Florida in 2007, two groups were given identical one-page essays which outlined the Israeli-Palestinian conflict fairly from both sides’ views. The two groups were then told to side with either the Palestinian-Arabs or the Israelis. Along with this essay, the two groups were given maps. For one group, the map was of a large Israel, and for the other, the map was of Israel with her size in relation to the Middle East as a whole. The group who had the map of a large Israel overwhelmingly chose to side with the Palestinian-Arabs, and the group with the map of Israel as it related to the overall size of the Middle East overwhelmingly chose to side with the Israelis. But why? It all boils down to the belief that the side with less power is automatically the side not at fault. If one group out of two is seen as weaker, we naturally gravitate towards that group.

This way of thinking no doubt affects the thought process of the Obama administration. When we look at the conflict within the scope of Israel itself, the Arab population no doubt looks like the underdog. However, when we step back and see this conflict through the lens of the whole Middle East, Israel, and the Jewish people, are the underdogs by a large margin. According to a study conducted by the Pew Forum in 2009, 91.2% of the Middle East and Northern Africa is Muslim. And since Christianity makes up roughly 5% of the Middle Eastern and North African religious population, that means that less than 4% of the whole Middle East and North Africa is Jewish. The unfortunate thing is, the Obama administration can’t seem to see the larger picture; they see the forest for the trees.

At the beginning of this post, I told you that by the end of this post, you’d be able to understand what the administration’s quotes actually mean. If you walk away from this blog post remembering one thing, I want it to be the next four sentences. The Obama administration is playing the underdog game. Specifically after tragedy within Israel, by urging Israel to make concessions after terror attacks on Israeli Jews; in not standing by Israel’s actions that she may take against terrorism; by repeatedly chastising Israel for building in Israel’s land; by condemning actions that the administration claims are only supported by a “Palestinian minority,” (which by their definition would mean that the PA, who incites and supports terrorism as well as funds jailed terrorists, is a minority) the administration is sending a very clear message to the world: The Palestinian-Arabs as a whole are not to be blamed for the uptick in terrorism; it is a natural reaction to whatever actions the “bully” Israel may take. According to the Obama administration, it is the Israelis who can always do more; it is the Israelis who are at fault.

As one writer put it: underdogma.

About the Author
Jordan Lustman, 18, is a High School student in Los Angeles, California. He is both a chairman and founder of the YULA (Yeshiva University of Los Angeles) Israel Advocacy Club, one of the most respected and recognized High School Israel Advocacy Clubs in the nation. He is both heavily involved with AIPAC, and an MZ Teen Intern for StandWithUs.
Related Topics
Related Posts
Comments