Turkey is again pushing US and EU for a Syrian buffer zone for humanitarian purposes, and as air cover for its “moderate rebels” to enter Syria to fight ISIS/Assad regime.

While it’s true Turkey, Lebanon and Jordan are each hosting over one million refugees, various sources point to additional reasons why Turkey may be seeking a no-fly zone.

Carve out salafist statelet for gas pipeline to EU market

A 2014 Armed Forces Journal article  discussed how the Syrian civil war is driven by Qatar/Turkey/Saudi interests in running a Qatari gas pipeline through Saudi Arabia, Syria, Turkey and unto the lucrative EU market. The pipeline would run through Aleppo region that is the proposed no-fly zone.

Indeed, it seems unlikely the regimes of Ankara, Doha, and Riyadh are fighting for a democratic future in Syria, given the large number of foreign fighters in their Army of Conquest that is now headquartered in Idlib province, and the dominant Islamic extremist groups are conducting ethno-religious cleansing by killing or expelling Christians, Druze, other minorities while establishing shaira law.

This corroborates the 2012 Defense Intelligence Agency report of their desire to carve out a salafist statelet in Syria east of Assad-controlled territory in order to put pressure on his regime (In 2012 it was further east, but now that Assad has lost much territory it is just east of Latakia).

With its base in the Idlib governorate, the rebel coalition now has a direct supply line open from Turkey’s Hatay Province next to Idlib, further expanded by the new proposed Aleppo buffer zone. Counter-terror expert Jacob Zenn assessed that the “rebels may have enough resources to establish a de-facto state in northwestern Syria led by JN [Jabhat-al-Nusra] and supported by several Central Asian militas.” The rebel coalition includes Chinese Uyghur-led terror group, Turkistan Islamic Party (TIP), Uzbek-led Imam Bukhari Jamaat and Katibat Tawhid wal Jihad, as well as Chechen militias in the mix. 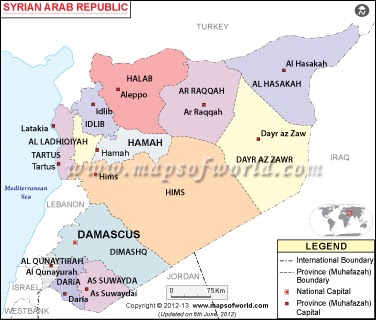 Over the past years, China and Turkey have been disputing over illegal immigration of Uyghurs via a passport scandal, and Chinese officials finally came out publicly in July that Uyghurs were being recruited and sold as “cannon fodders” for Syrian jihad.

An August Global Times article revealed that since the end of 2014, 1,000 Uyghurs have been smuggled into Turkey and are housed in Kayseri guarded by local police.  It also mentioned in a 2011 interview with Chinese media, Turkish ambassador to China Murat Salim Esenli said the Uyghur population in Turkey was around 300,000, while the Chinese authorities usually put the number at 100,000.

However a 2009 article by Matti Nonojen and Igor Torbakov from Finnish Institute of International Affairs, already cited Bulent Arinc, co-founder of AKP and then deputy prime minister, saying “we have profound historical ties to our brothers in the uighur region” including 300,000 strong Uighur community in Turkey. Thus with the recent surge of Uyghur immigration over the past years, that number may now be slightly higher.

Back in February when the passport scandal gained media attention, some analysts surmised the possibility of Erdogan using Uyghur manpower as his potential power projection asset in Syria. While it is acknowledged Turkey is hospitable to Uyghur refugees and China is ambivalent with Erdogan indulging his notion as protector of the Turkish-speaking world, Xi Jinping would not be pleased with Turkey setting up a pipeline to encourage Uyghur emigration for Syrian and eventual Chinese jihad.

In September, MEMRI TV translated a video of how the Chinese militant group TIP is setting up training camps with their families in Idlib, along with a new colony of 3,500 Uyghurs near the camps. The video went on to say that “thousands of Chinese turkistanis” fleeing China were resettled in the area especially in the village of Zanbaq, with 20,000 more being trained by MIT in Istanbul as “rebels” to eventually fight Assad in Syria and continue onto China.

The number 20,000 is hopefully an exaggeration, but it is true Uyghur militants in TIP are part of Turkey’s Army of Conquest. While China may perhaps be ambiguous regarding Erdogan “pulling a Crimea” by establishing a buffer zone with military settlements, even with eventual annexation similar to Russia, Beijing will take issue with Turkey training a Uyghur army that will eventually wage jihad in China to free “East Turkestan” since China has not challenged Turkey’s territorial integrity.

With TIP ramping up attacks on Chinese territories the past two years, and its evolution similar to ISIS from a terrorist organization to a professional army with Turkey’s training, if Erdogan continues this policy he will likely provoke China to enter the Syrian war to neutralize this threat to Chinese sovereignty.