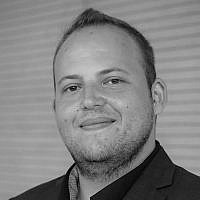 The Blogs
Asher Stern
Apply for a Blog
Please note that the posts on The Blogs are contributed by third parties. The opinions, facts and any media content in them are presented solely by the authors, and neither The Times of Israel nor its partners assume any responsibility for them. Please contact us in case of abuse. In case of abuse,
Report this post.

Zionism. Yes Zionism. It is a word that seems to scream from the annuls of history. An old-fashioned word if you like. Its not 1948 anymore. Jews are a crucial part of societies worldwide, there is no difference between us and them and this concept of Zionism just separates us from our communities even more. In 2020 words like these seem so easy to say. And for a moment they might make sense.

But once you truly examine that statement and what is going on worldwide, that moment passes very quickly. Whether on collage campuses, at rallies or even in the parliaments of countries, anti-Semitism is alive and well.  And Zionism? It is there. In the eyes of the lone soldier who leaves everything behind to come and defend his country, in the eyes of the collage student who stands up to the blatant lies that they see on campus because enough is enough and yes even here in Israel, in the heart of the Israeli Tzabar who enlists in a combat unit even though as an only child he doesn’t have to.

So why? What is that drive that forces them and thousands of others like them to make the difficult choice? At the end of the day standing behind your ideals is not easy. In fact, at times it is the most difficult thing to do. The answer?  Zionism. But Zionism is not only there in the individual.

Zionism is there in the soul of the nation which mourns when that very same soldier falls in his duty, protecting the country and nation that he loved so dearly. This is the pain that we as a nation feel, a pain that seems to bind us. We are bound by national pain every Memorial Day because Israel is a small country and almost everyone knows some one who fell, who paid that price. But what about the day after? How is it that it is so simple to be a Zionist when we all feel pain, but the next day? It becomes harder.

Zionism cannot be a concept that is outdated, it will not be a concept that dies. The pain that we all feel when one of our own falls? The unity that we show? That cannot be something that only happens during tragedy. Our people cannot be one that only unites only due to tragedy. We must take the memories of those who have fallen, realize the price that we pay and push forward. The concept of Zionism cannot die, and cannot be one that we see only when we feel pain.

And yes, it is complicated, and there are many opinions about how the future might look. But the core ideals? They must last. That message is something that we must show not only to those that hate us, that our people are united but also to our leaders.  After three elections, and an international pandemic who knows what else this year will bring and how much less control we will have over our world. But what we can control? We can come together as a nation. Comfort those that have lost everything, remember those who paid the ultimate price but also look to the future.

We carry a duel weight on our shoulders. The names and memories of all those who have fallen to ensure that we have a state, so that our nation can come home after thousands of years in exile as well as the responsibility to those who have yet to come, the next generation. To make sure that despite the hate from outside and despite the turmoil we feel as a nation, we will remain united.

So, when you ask that question, is Zionism alive and well? The answer must be yes. Zionism lives on. The fight goes on, both against our enemies but the greater fight, the one that we must remember every day is the fight to stay united. And that is a fight that we must win.

About the Author
Born and raised in South Africa, Asher moved to Israel in 9th grade. Asher enlisted in the Israeli Air Force as a combat soldier in the Air Defense Corps, where he received a soldier of excellence award. Currently, in his final year at IDC studying Government,Strategy, and Diplomacy and is an Argov Fellow. Asher is a Heseg scholar, RRIS Debate Club board member, intern at the International Institute for Counter-Terrorism (ICT), and a member of Reservists on Duty. He is also the founder and manager of Project “Ohr,” an Israel advocacy program for international students. He hopes to continue to do what he loves in the future and work in Israel advocacy either in the public or private sector.
Related Topics
Related Posts
Comments