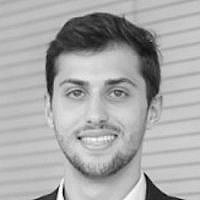 The Blogs
Ethan Sheinker
Apply for a Blog
Please note that the posts on The Blogs are contributed by third parties. The opinions, facts and any media content in them are presented solely by the authors, and neither The Times of Israel nor its partners assume any responsibility for them. Please contact us in case of abuse. In case of abuse,
Report this post.

Imagine an ambitious secular republic, reverting to authoritarianism championing itself as a leader of the Muslim world. Where a state possessing NATO membership, helps Russia gain a foothold in the Middle East. An EU candidate country, who consistently bullies and aggravates members of the Union they’re attempting to join. An Islamist president who’s built his base on nationalism and Sunni Islam, finding regional partnership with Iran who actively destabilizes its Sunni neighbors for regional supremacy. A nearly 100-year-old republic, which frequently attacks journalists. Following the recent patterns of policy and leadership in the Turkish Republic is as confusing as it appears, where they routinely build bridges with states combating institutions Turkey belongs to. Meanwhile interacting in an abrasive fashion, with actors possessing critical ties. But theory and logic are irrelevant at the intersection of pragmatism and desperation, in the 4th dimension known as the twilight zone.

Along several conflicts in the eastern Mediterranean, Turkey re-appears with inconsistent or conflicting motivations. Often times, these motivations fit in the baskets of moral posturing, pragmatism, or reckless self-interest. For instance, when examining Turkey’s response to the taboo-breaking Israel-UAE and Israel-Bahrain accords, Erdogan condemned them and announced the potential suspension of diplomatic relations with the UAE and Bahrain. The string of motivation for such a rash reaction is found in the thread of Erdogan’s popularity in the Muslim world, as a leader championing Islamic issues such as the Palestinian cause. However, value-driven geopolitics, become vain optics when examined side by side to the Turkish occupations and invasions in Syria and Iraq. While these moves can be interpreted as pragmatic buffers between neighboring Kurdish areas, it spoils Erdogan’s reputation as the “leader of the Muslim world” as Kurds are predominantly Sunni Muslims. So, it would appear Turkish pragmatism reigns supreme in the foreign ministry.

Yet, it wouldn’t be pragmatic to isolate oneself in your regional sphere of influence, yet Turkish foreign policy regularly creates these scenarios. For instance, tensions over disputed exclusive economize zones and nautical sovereignty in the Levantine shelf and Aegean sea have risen as a result of Turkish naval expeditions. By using Turkish and the disputed Northern Cyprus coastal geography, Turkey has attempted to extend its maritime borders giving them access to natural gas deposits. This has put them in direct collision with Cyprus and Greece, intern drawing in NATO and EU actors such as France. While Turkey has yet to feel hard ramifications for their actions, momentarily outmaneuvering its foes, its reckless self-interest may sacrifice short term gains for long term isolation.

While every country has a profile of what influence it aspires to project abroad, Turkey is increasingly projecting power further and further away from its borders. While this may be perceived as Neo-Ottomanism, this is inaccurate. What appears like inconsistent foreign policy, is Erdogan increasingly looking outward to solve internal challenges. For instance, currently over 3.5 million Syrian refugees live in Turkey. Implementing policies to integrate the refugees financially and socially, seems like the logical solution. However, much of Erdogan’s base is built on nationalism, so integration and diversity can disrupt the status quo. Therefore looking outward to resettle Syrian refugees in northern Syrian is the answer.

This is especially the case when examining the dimensions of the Turkey-Libya Maritime deal. Coronavirus has created a time bomb to blow up an already fragile economic situation. Therefore, a deal for Libyan energy can create stability in these rocky economic waters. However, in order to secure this stability, it must first ensure the National Accord Government in Tripoli stays upright despite being militarily outnumbered four to one in this proxy conflict. Furthermore, this deal additionally confronts the Leviathan pipeline between Cyprus, Greece, and Israel. This nuanced dilemma epitomized the reliance on outward solutions to solve internal challenges.

Despite the challenges Turkey faces domestically and abroad, they continually punch above their weight as their geopolitical impact outweighs their capacity. The question is how long will this talent last? While Erdogan has shown the ability to outwit his contemporaries, it would be incorrect to assume he has leverage because Turkish proxies continue to be on the winning side of conflicts. Firstly, between the previously mentioned actions in Libya and the Levantine shelf, Turkey has found a way of positioning itself against Mediterranean neighbors Egypt, Israel, Greece, and Cyprus, the latter two which add the EU to the equation. Additionally, unstable Syrian and Iraqi neighbors to the south create more security problems than opportunities. While on the east, Turkish-Iranian relations are deepening, this pushes away actors in the gulf. Geographically, Turkey is isolating itself and will run out of outward solutions if they maintain the status quo. And secondly, Turkish EU candidacy and NATO membership have outlived its necessity, calling into question if they should reap the benefits from institutions they seek to undermine. While there is no precedent to untangle them from these institutions, continual provocations can incentive incremental reforms minimizing Turkish input or contributions. And operating aggressively without tangible leverage will only accelerate the isolation. While all appears strange on the surface, on this plane of reality, the irrational becomes comprehendible, in a dimension known as, the twilight zone.

About the Author
Ethan grew up in New York and currently studies Government, Strategy, and Diplomacy at IDC. Ethan is a member of the Argov Fellows Program for Leadership & Diplomacy class of 2020. Additionally, he interns at the International Institute for Counter-Terrorism working on topics including European foreign fighters, alt-right radicalization, and primary source data synthesis. Ethan also was a member of the IDC Model UN as the head of academics.
Related Topics
Related Posts
Comments