In the next few days, as President-elect Joe Biden’s January 20 inauguration draws closer, Israel may well approve plans to expand its network of settlements in the West Bank.

This bland but potentially explosive announcement was issued less than two months after Israel disclosed it will construct 1,257 housing units in Givat Hamatos, a neighborhood in eastern Jerusalem.

In what was seen as an attempt by Israel to deflect criticism of its intention to reinforce its presence in the West Bank, Defence Minister Benny Gantz granted Palestinians in Area C of the West Bank a number of construction permits. In general, the vast majority of such requests are denied or interminably delayed.

Area C, fully under Israeli security and administrative control, is where most Israeli settlements are located.

Israel’s newest settlement projects are designed to consolidate Israel’s grip on the West Bank and to break up its territorial contiguity so as to foreclose the possibility of Palestinian statehood.

Given the political sensitivity of creating yet more facts on the ground as Donald Trump’s successor is poised to assume office, it’s conceivable that Israel may yet postpone its plans so as not to antagonize the incoming Biden administration.

Timing is an important factor in Israel’s strategy, but as far as Prime Minister Benjamin Netanyahu is concerned, the settlement project is sacred and unstoppable. As he said on January 11, “We are here to stay. We’re continuing to build the Land of Israel.”

With a little more than two months to go before the next general election on March 23, Netanyahu is trying to satisfy his right-wing base, which supports the expansion of settlements and opposes a two-state solution.

The outgoing Trump administration, in a sharp departure from U.S. policy, did not regard settlements as inconsistent with international law. In line with this view, Mike Pompeo was the first secretary of state to visit a settlement. Last November, he visited a winery in Psagot, which named a brand of wine after him.

Biden, a proponent of a two-state solution, contends that settlements are an obstacle to a fair resolution of Israel’s conflict with the Palestinians.

Assuming that Biden will hew to a policy that is less favorable to the current Israeli government, Israel’s opposition leader, Yair Lapid of the centrist Yesh Atid Party, criticized the timing of last week’s Ministry of Defence announcement.

“This is an irresponsible step,” he said. “The Biden administration still hasn’t taken office, yet the government is already leading us to an unnecessary confrontation. A sane government doesn’t start an unnecessary battle with a new American president.”

Netanyahu’s brinkmanship translates into a case of deja vu all over again, as observers have pointed out.

When Vice-President Biden arrived in Israel for a visit in 2010, Israel announced that 1,600 housing units would be built in the eastern Jerusalem neighborhood of Ramat Shlomo, thereby inflaming bilateral relations with the United States.

The announcement embarrassed Biden and infuriated his boss, President Barack Obama, whose views on the issue were rooted in the assumption that East Jerusalem should be the capital of a future Palestinian state in the West Bank and Gaza Strip.

Although Biden is critical of Netanyahu’s policies with respect to settlements and the Palestinians, he rejected calls from Democratic presidential rivals like Bernie Saunders and Elizabeth Warren to condition U.S. aid to Israel on an end to settlement expansion, calling their proposal “absolutely outrageous.”

And at the close of Obama’s presidency in 2016, Biden was reportedly opposed to his decision to abstain from a United Nations Security Council resolution condemning Israeli settlements.

Biden described Trump’s transfer of the U.S. embassy to Jerusalem as “short-sighted,” but said he would not move it back to Tel Aviv.

Biden calls his commitment to Israel’s security as “unshakable” and has said he will maintain its qualitative military edge over its Arab neighbors. Biden played a role in providing Israel with $38 billion in U.S. military assistance over a ten-year period.

But Israeli settlements may prove to be the fly in the ointment. 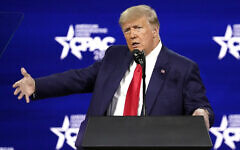 In first speech since leaving office, Trump flirts with another run in 2024
Agencies