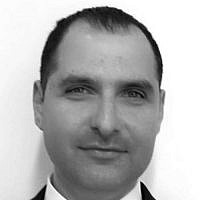 The Blogs
Daniel Rakov
An expert in Russian Middle East Strategy
Apply for a Blog
Advertisement
Please note that the posts on The Blogs are contributed by third parties. The opinions, facts and any media content in them are presented solely by the authors, and neither The Times of Israel nor its partners assume any responsibility for them. Please contact us in case of abuse. In case of abuse,
Report this post.

The difficulties of the Russian military on the battlefield increase the possibility that in the coming weeks, Moscow will expand the fighting as part of preparations for a long-term military campaign. Putin’s apology considering Lavrov’s antisemitic remark signifies, that there is room to move the Israeli public position on the war closer towards the Western one, without severing dialogue with the Kremlin. 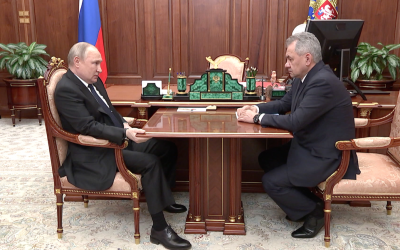 Russian Defense Minister Sergei Shoygu updates Russian President Vladimir Putin about the completion of the conquest of the city of Mariupol, except for the last stronghold of the Azovstal steel mill (April 21, Kremlin.ru).

After two weeks into the Russian renewed offensive in Donbas, the Kremlin has little result to present the Russian citizen on Victory Day (May 9), which marks the anniversary of the victory over Nazi Germany. The Western military assess in the last days that the storm of the last Ukrainian stronghold in Mariupol, the Azovstal steel mill, despite the promise by president Vladimir Putin to refrain from it, is meant to frame its takeover as a Russian major accomplishment.

Since the beginning of the war, the offensive capability of the Russian military has been severely eroded. The Russians hoped that reorganization of their forces, putting an experienced commander in charge, and focusing on the Donbas front (after withdrawal from Kyiv and northern Ukraine) would accelerate their advance into Ukrainian territory. Still, for the time being, the results on the ground indicate that the Ukrainians, who are more motivated and enjoy Western backing, can defend themselves effectively and wage occasional counterattacks. Western weapons were transferred to the Ukrainians, and the exchange of threats between Washington and Moscow is rising. The latter continues to issue veiled threats of a nuclear option.

On April 27, Russian President Vladimir Putin described the objectives of the war as “to guarantee peace and security for the residents of the Donetsk and Lugansk People’s Republics, of Russian Crimea, and our entire country.” Nevertheless, the Russian propaganda machine is preparing public opinion for a protracted, total war to grab much wider territories. In recent weeks Russian media has been increasingly calling for a general mobilization of all Russian national resources. The West is presented as fighting an all-out proxy war aimed at dismembering Russia.

Russian officials argued last week that Russia will not be satisfied with Donbas and aspires to conquer the entire southern and eastern parts of the country, including the provinces of Mykolayiv, Odesa, Zaporizhye, Dnipro, and Kharkiv. Ukraine accused Moscow on April 26 of instigating violence in the pro-Russian breakaway region of Transdniestria, Moldova. Russia could be signaling to NATO the possibility of destabilizing other countries besides Ukraine.

Moscow has managed to create legitimacy for the war in Ukraine among the public, which has rallied behind Putin, accepting the explanation that this is an inevitable war against a Ukrainian-Nazi regime that serves as a tool of the West against Russia. The internal Russian discourse presents historical parallels between the current situation and WWII, implying an intention to put additional national resources into the fighting in the spirit of the sacrifice back then.

The Russians defined the fighting as a “special military operation” and forbid describing it as a “war.” Russian law does not allow compulsory recruitment of citizens as long as no war has been declared. Recently, however, the word “war” has been heard more often by the Russian establishment. If Russia declares war, it will be able to significantly increase its manpower in Ukraine and move the economy into a state of emergency. Although Russian officials deny soon general mobilization, they are expected to promote at least a partial one, to enable more manpower for the war.

There was an assessment that Putin expected his army to finish the seizure of Donbas by Victory Day. However, the military impasse and the calls for mobilization strengthen the possibility that Putin will use this occasion to expand the fighting and justify a broader mobilization instead of consolidating the gains and striving for a ceasefire. He is expected to declare the annexing of the Donbas and Kherson regions, and might claim that the seizure of Mariupol fulfills the goal of “denazification”, as its last defenders, the “Azov regiment”, are viewed in Moscow as the backbone of the  Ukrainian “nazis”.

In the coming months, the expansion of the fighting is expected to increase the scope of destruction and casualties for both sides and push Ukraine to launch more attacks on Russian territory. This could raise the risk of strategic miscalculation and lead to a direct clash between Russia and NATO, a scenario the two hitherto tried to avoid.

Negotiations between Russia and Ukraine for a ceasefire have continued, but the parties accuse each other of lacking seriousness. A ceasefire demands a compromise from the Russians, Ukrainians, and the West, which is still a long way off.

For Putin, this war is the most critical move of his life. His determination to dismantle Ukraine and promote a world order not dominated by the United States should not be underestimated. Given the personal risk he has taken and the nationalist fervor in Moscow, Putin will refuse a ceasefire that will not grant him some clear achievement, which he currently lacks.

President Volodymyr Zelensky declared the objective of returning lost territories by force. The images of the victims and destruction and the Ukrainian achievements on the battlefield leave him almost no space for compromise as the Ukrainian public supports continued fighting.

Meanwhile, Western leaders see the war as an opportunity to weaken Russia. They also do not want to be appeasers that allow Russia to take sovereign Ukrainian territory. US President Joe Biden hopes to bolster his low popularity by demonstrating strength against Putin ahead of the November midterm elections.  The weapons supply to Ukraine, shaming Putin, and the increased likelihood of Finland and Sweden joining NATO, could push Putin to take more aggressive actions.

The last week underscored these dilemmas. The antisemitic remark by Russian Foreign Minister Sergei Lavrov, that Adolf Hitler had Jewish origins, triggered harsh condemnation in Israel. The Israeli criticism unleashed a wave of anti-Israeli propaganda throughout the Russian state media. Putin called PM Naftali Bennett on Thursday to calm the crisis and reportedly apologized for Lavrov’s remark. Bennett raised on behalf of the Ukrainians the issue of letting the defenders of Mariupol leave, but Putin demanded them to surrender. The profound differences between the readouts of the phone-call, in Israel and Moscow (where an apology is absent), underscore the persistence of the tensions.

The current indecisive position on the war in Ukraine doesn’t help Israel to maximize its interests. It pays a high long-term reputational price in the eyes of its Western allies, and a question arises, what is the right point of equilibrium in Jerusalem’s relations with Moscow.

Putin’s call proves he deeply cherishes the relations with Israel and that he’s content with its neutral position. Israel is one of the few countries in the world that Moscow respects, and it should leave open channels of communication with the Kremlin to promote its interests and help de-escalate the Ukrainian crisis.

Yet, the call also shows that Israel has more maneuvering room in distancing itself from Russia and realigning its position with the West. Since Israel seeks to limit its actions against Russia and refrain from sending lethal weapons to Kyiv, it is worth giving the maximum humanitarian aid and accelerating the supply of non-lethal equipment. In recent days, closing the Israeli field hospital in Ukraine, particularly when Moscow could escalate the fighting, didn’t send the proper signal to the world.

We cannot know what are the details of the Israeli mediation between the parties, but the optics are that it had faded away, in comparison, for example to pro-active efforts by the Turks. The leaders didn’t talk for more than six weeks until their Thursday call. For the Israeli position, that it will not condemn Russia to be helpful to defuse the Ukrainian conflict, to be taken seriously, it must increase the visibility and scope of its go-between activities.

The article is based on a Hebrew version first published in Jerusalem Institute for Strategy and Security (JISS).

About the Author
Daniel Rakov is an expert on Russian policy in the Middle East and great-power competition in the region. He's a senior fellow at The Jerusalem Institute for Strategy and Security (JISS). He had served in the IDF for more than 20 years, mainly in the Israeli Defense Intelligence (Aman). From 2019 to 2021 he was a research fellow at the Russian Studies Program in the Institute for National Security Studies (INSS). In 2021 he co-edited a volume of articles "Thirty Years of Russian-Israeli Relations: Past, Present, and Future", published in Hebrew and in Russian (by INSS and MGIMO University, Moscow).
Related Topics
Related Posts
Comments