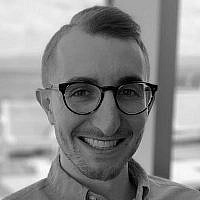 The Blogs
Zachary Shapiro
Apply for a Blog
Please note that the posts on The Blogs are contributed by third parties. The opinions, facts and any media content in them are presented solely by the authors, and neither The Times of Israel nor its partners assume any responsibility for them. Please contact us in case of abuse. In case of abuse,
Report this post.

Last week, the Trump administration announced that Israel and the United Arab Emirates reached a landmark diplomatic agreement to normalize relations. President Donald Trump hinted that the deal could be the first of many accords with other Arab states. Israel Must Seize Its Moment in Abu Dhabi

Of course, Israel should celebrate this historic achievement. But Prime Minister Benjamin Netanyahu and his government should resist the temptation to sit back and rest on their laurels. Instead, they should seize upon this breakthrough by prioritizing non-military cooperation, choosing a fitting ambassador to Abu Dhabi, investing in public diplomacy, and moderating Israeli policy towards the West Bank. Taking these steps would help solidify the agreement while advancing Israel’s broader normalization campaign in the Middle East and beyond—a cornerstone of Israeli doctrine.

Israel has long tempted unlikely partners with access to its defense and technology sectors. According to the White House’s statement, security ties will be a pillar of this normalization deal, along with environmental, medical, and technological trade, and more. No doubt Israel’s security cooperation with its Emirati counterparts is crucial to countering Iran. However, Netanyahu and his diplomats should work tirelessly to advance relations in non-military sectors first and foremost. Ultimately, the long-term success of this treaty hinges on broad and deep economic cooperation. By focusing on non-military commerce, Israel can diversify and deepen a critical partnership for years to come.

Second, the Israeli government should choose its first envoy to Abu Dhabi carefully and strategically. And Netanyahu should vet candidates more cautiously than he has in the past. In 2016, he nominated former settler leader Dani Dayan as ambassador to Brazil. Israel suffered an embarrassing setback when Brazilian officials rejected Dayan’s credentials, citing his past in the settler community. Ultimately, Dayan became Consul General in New York, where he made impressive headway with critics of the Israeli government. On other occasions, Netanyahu has used diplomatic appointments to exile potential political foes like Danny Danon, Israel’s outgoing ambassador to the United Nations.

This time, Netanyahu should resist the urge to politicize the appointment. Instead, he should select an ambassador who can speak to the Emirati people articulately: an Arab-Israeli official. Two in particular would make strong choices. George Deek, Israel’s ambassador to Azerbaijan, has been called “Israel’s best diplomat.” Ishmael Khaldi, who in July became Israel’s ambassador to Eritrea, is Israel’s first Bedouin diplomat. He, too, would make a fine nominee.

After selecting a qualified ambassador, Netanyahu and the Foreign Ministry should invest heavily in exchange and cultural diplomacy programs in the United Arab Emirates. If handled properly, Abu Dhabi could be a steppingstone to Manama, Muscat, and beyond. Accordingly, normalization with the UAE is a golden opportunity for Israel to break down barriers and to change long-hostile Arab attitudes. A robust public diplomacy strategy could help Israeli diplomats reach Emirati audiences and lay the groundwork for long-term change. The Foreign Ministry excels at this sort of diplomacy, so it should make these programs a strategic priority as soon as the Embassy opens its doors.

Finally, Netanyahu should moderate Israeli policy toward the West Bank. Emirati leaders have already faced blowback across the Arab world. Beyond keeping its word to avoid annexing the West Bank for the foreseeable future, the Israeli government should refrain from further settlement activity for at least the near term. In the wake of the normalization deal, each new settlement is effectively a threat to Israel’s relationship with Crown Prince Mohammed Bin Zayed.

Furthermore, settlement construction, especially in more controversial areas understood to comprise a future Palestinian state, could preclude the possibility of more official relationships with other Arab countries. Much like the possibility of annexation, building in these areas could jeopardize this potential realignment—a focal point of Israeli foreign policy and its strategy to counter Iran. Though the Israeli right has condemned Netanyahu’s concession on annexation, this historic victory gives him sufficient political cover to continue pursuing other pragmatic policy objectives while pivoting towards the Israeli center—and away from wayward settlers on his right.

Overall, the Israel-UAE agreement marks a watershed moment for Israeli foreign policy and for Netanyahu. A string of accords with other Arab states may well be on the horizon, and Israel’s longtime goal of greater normalization may finally be within reach. Netanyahu should be pleased and proud, but he should also lean forward. He must capitalize on this opportunity to secure Israel’s place in the region and among the nations.

About the Author
Zachary Shapiro is a publishing Adjunct at The MirYam Institute (Www.MirYamInstitute.Org) and a foreign policy analyst and master's candidate at the Fletcher School of Law and Diplomacy. He was previously a research associate for Middle Eastern studies at the Council on Foreign Relations. During the 2016 campaign cycle, he was a foreign policy researcher for Senator Marco Rubio's presidential campaign.
Related Topics
Related Posts
Comments