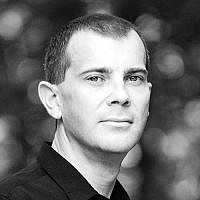 The Blogs
Sten Hankewitz
Apply for a Blog
Please note that the posts on The Blogs are contributed by third parties. The opinions, facts and any media content in them are presented solely by the authors, and neither The Times of Israel nor its partners assume any responsibility for them. Please contact us in case of abuse. In case of abuse,
Report this post.

The editor-in-chief of the Times of Israel, David Horovitz, speculates in his blog post on why Israel’s Prime Minister, Binyamin Netanyahu, is hesitant to go “all the way” in Gaza. He offers a few potential explanations, among them that maybe Hamas “is in real trouble—not militarily, where its key capacity has not been significantly harmed, but in terms of its credibility in Gaza and thus its likely standing when the guns fall silent,” or that “Netanyahu is watching the boiling Middle East aware of the ease with which one active military front, in Gaza, can become two, three or more. In South Lebanon, Hezbollah has 10 times as many rockets as Hamas had three weeks ago, with longer ranges, greater accuracy and bigger warheads.”

But whatever the reasons are behind Bibi’s thinking, I don’t think they matter any more. Like any leader of a nation, Netanyahu has one job—to keep his citizens safe. And in order to do that, he really doesn’t have much of a choice—he must go “all the way.”

Let’s face the facts. Hamas is sworn to Israel’s destruction. They will not stop attacking Israel as long as they exist, and continue their mission of trying to push Israel into the sea. Hamas will never recognize Israel nor its “right to exist” (my God, how I hate that term). Hamas is a terrorist organization whose goal is to terrorize. The best Hamas has ever offered Israel is that if Israel withdraws to the pre-1967 borders, it is willing to consider a ten-year truce (and the word “truce”, hudna, for Hamas means restocking weapons and getting stronger).

The clear fact is, it is impossible for Israel to coexist with Hamas just forty miles from Israel’s financial hub, Tel Aviv; just fifty miles from Israel’s capital, Jerusalem. Since 2001, 4,800 rockets have hit Israel, over 4,000 of them since 2005. Rockets have landed in Beer Sheva, Ashdod, Tel Aviv, Jerusalem, Haifa and elsewhere. In July this year, a rocket landed in the vicinity of the Ben Gurion airport near Tel Aviv, prompting many American and European airlines to cancel flights to Israel, a country that lives from tourism.

In 2005, Israel unilaterally withdrew from Gaza, uprooting all Jewish villages, altogether over 9,000 people; and ended its civilian and military presence in the Strip. The “occupation,” as many called it (the territory was won in a war, not by aggression), had ended. Israelis couldn’t even cross into Gaza after they were forced to leave. Nevertheless, Hamas claims it’s fighting against “occupation.”

After every escalation of rocket attacks by Hamas, Israel has launched a counter-operation to defend itself. Every time, Israel has attacked Hamas’ positions in Gaza, its tunnels, its rocket launchers, its terrorist positions. Every time Israel has responded, cries of outrage have sparked all over the world. And not only have misinformed people protested against Israel’s right to defend itself, also governments and leaders have voiced their opposition to Israel’s use of force. It’s as if, to these people, killing Jews were perfectly fine, but Jews defending themselves something of a complete outrage and injustice.

But if, whatever Israel does, it will always receive a beating from every side of the diplomatic front, then what difference does it make if Israel went to Gaza and, basically, “flattened” it? The world has shown for millennia that they don’t give a fuck about Jews, nobody will come to the aid of Jews at the time of need, and Israel is—or should be—the only place in the world where Jews can actually feel safe. Therefore it’s Israel’s sacred duty to live up to that expectation. Moreover, Israel’s Law of Return calls for every Jew to return to Israel, to the land of our ancestors, so the country must be up for the task of defending every Jew that has answered the call, and make sure all its people are safe.

And that is it—the only way Israelis can feel safe is annihilating Hamas. I don’t know another word I could use here—partly because Hamas itself calls for annihilating Jews, partly because there really isn’t another way of dealing with terrorists. Israel has to go “all the way,” it has to re-occupy Gaza and wipe Hamas out. Destroy all weapon stockpiles, rocket launchers, tunnels, terrorist strongholds, bunkers—basically, destroy everything that can hurt Israel.

And this means, it’s time to go all the way in Gaza.