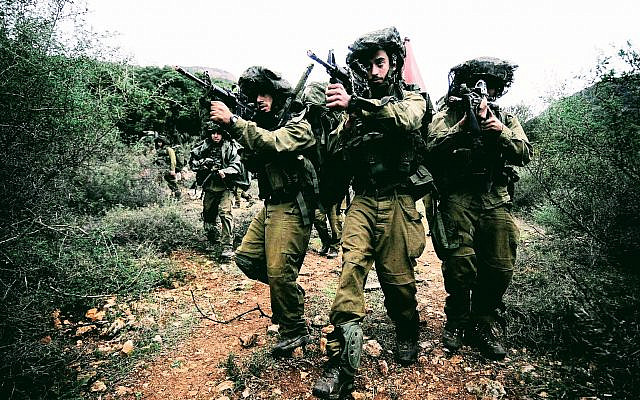 In response to an ongoing wave of Palestinian terror attacks this year, Israel has stepped up preventive raids in the West Bank, arresting terrorists and confiscating weapons. However, terror groups continue to threaten Israel from within, and there is even talk of a deadly third intifada. Even worse, looming over Israel is Iran’s menacing pursuit of nuclear weapons “to destroy Israel and attack the West.” As concerning as all this is, we need to try to prevent escalation and continue to seek opportunities for reconciliation and peace. At the same time, we need to remember that this is a long, ongoing war for our Jewish homeland and our survival and that we will win.

Recently, I read Israel, A Nation of Warriors by Moshe Katz, a former IDF infantryman and a seventh-degree black belt in Krav Maga (Israel’s official martial art). Katz provides a terrific perspective on our history (from Biblical times to present) as a warrior nation, where, despite almost 2,000 years of suffering in exile, homelessness, and oppression, our fighting prowess and heroic spirit continue unabated. Katz points out numerous keys to our strength and long-term survival:

Unlike Russia’s war in Ukraine, where Russian soldiers are unmotivated and see no real reason to fight on foreign soil, Jews and Israelis have every reason in the world to defend themselves. For us, it is about the right to exist! It’s literally a matter of survival: protecting our families, our homes, our Jewish religion and culture, and our very existence. In every generation, empires and anti-Semites have risen up against us to try and stop us from worshipping freely; to take our land; to oppress and kill us; but they keep disappearing from existence while we are still here, thank God.

As Theodor Herzl envisioned, we fight to be free, to defend ourselves, and to be sovereign in our own promised homeland. We believe that every person’s life is sacred and should be protected, and we make sure that everyone comes home from the battlefield and that prisoners are freed at almost any cost. Overall, we know and feel our purpose deeply and are motivated to fight and win, as Katz says:

In the 1973 Yom Kippur War, we were caught by a surprise attack, which G-d forbid could have resulted in our losing the war, so we have learned the hard way to always be prepared. That means we must be alert, on guard (“like an animal in the jungle, always aware of potential predators”). We work to ensure that we have the very best intelligence, surveillance, and reconnaissance so as never to be taken by surprise again. However, as Jews, we don’t just prepare by relying on military might alone, but rather we equip ourselves with a rock-solid faith in Hashem. Similar to when Amalek attacked our old and weak from behind in the desert when we left Egyptian bondage, we turn to fight our enemy valiantly, but also, like Moses, we raise our hands to G-d to beseech Him that we should prevail. Thus, it’s our combination of physical and spiritual might that makes us true warriors of Hashem.

Overall, Katz points out that Israel is an unabashed “gun-packing nation” and that they are a “people’s army,” where military service is compulsory but also where there is a deep respect, appreciation, and pride in serving in the IDF. In Israel, there is a common saying about the importance of military training being grueling and realistic: “Tough in training, easy in combat.”

Moreover, let me add that Israel spends over 5% of its gross domestic product on defense (ranking in the world’s top 5), in addition to the $3.8 billion of annual military assistance that the U.S. provides its good friend and strategic ally. Israel also utilizes its high-tech industry to provide the best equipment for its military. Whether flying overhead with their F-35Is, advancing on land in the Merkava IV tanks, prowling undersea in German Dolphin-class submarines, or using their multi-tier layers of missile defense (Iron Dome, David’s Sling, and Arrow 3, and soon to be laser “Iron Beam”), Israel invests in, builds, and procures weapon systems par excellence. Finally, we won’t say anything about nuclear weapons or other weapons that can do immense damage. This is called “deliberate ambiguity.”

Katz really hones in on our warrior mindset in making us successful:

Certainly, after peace with Egypt and Jordan, the Abraham Accords have brought Israel even closer to some semblance of regional peace. Additionally, the maritime deal with Lebanon this week has renewed hope for continued advances in reconciliation and peace with Israel’s neighbors in the Middle East. At the same time, Israel and the Jewish people must maintain absolute resolve to defend our people, to be sovereign in the land of Israel, and to safeguard our faith and worship of the one true G-d. In the end, we can be assured that all the terrorist attacks, intifadas, missiles, and Iranian nukes in the world will be no match what-so-ever for the IDF and the almighty hand of G-d.