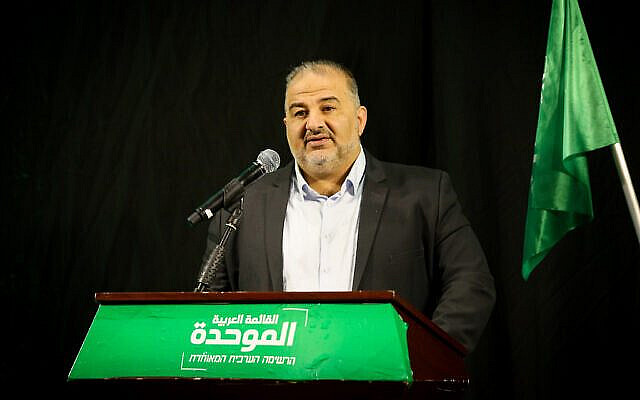 For decades, the liberal side of Israeli politics assumed the country’s Arabs were basically in the bag: even if not invited formally into coalitions they could be counted on for passive support. They were content to be as a loyal concubine, unfit to be a spouse but never flirting with the Jewish right. That arrangement is imploding before our eyes.

This could doom what chances the “center-left” may have to return to power in a clean way. And it will have to work hard to turn back the clock. That’s because (for the moment) it still faces the wiliest of rivals in Benjamin Netanyahu, and also because there are excellent reasons for the Arabs’ eyes to wander.

First, the Palestinian issue. The old paradigm assumed liberal Israel was somehow friendlier to the Palestinians and in general to Arabs; less racist, and more concerned with the injustice of the occupation. But a paradox has eroded this: although more or the hard left today accepts the Palestinian grievance narrative, the broader camp has despaired of peace as such.

The mainstream of the center-left has concluded the Palestinians will remain maximalist in peace talks and therefore doom them, and that Israeli public opinion is no longer animated by ideals. It still opposes expanding settlements and seeks partitions, partial settlements and perhaps unilateral pullouts, but the reasons it presents are demographic, meaning nationalistic.  Its message to would-be crossover voters is: Idiots, if you continue voting for the right you are saddling the Jewish state with too many Arabs by perpetuating the West Bank occupation!

That argument possesses logic and has moved a few hearts and minds, but it is not music to Israeli-Arab ears. Indeed, some may not mind making Israel more of a binational state (even if the road passes through an undemocratic interim period in which the Palestinians have no voting rights). If anything, it may be a reason to back the clueless right.

Then there is the cultural/religious issue. Israeli politics, long defined by disagreements on the occupation, is morphing into a modernist-traditionalist dichotomy just as in the United States and elsewhere in the West, with similar correlations to education, religiosity and town versus country. Israel’s 2 million Arabs are also thusly divided, and viewed through this prism not all of them sit comfortably with the Jewish center-left.

The Raam party — with four of the 10 seats currently help by “Arab parties” in the new Knesset — is defined by devotion to traditional Islam. Just like much of the Jewish religious establishment, it has antipathy to progressivism, an inclination to proscribed gender roles, and special loathing for the gay rights movement. As such it’s much closer to the ultranationalists who still boycott them than to the leftist Meretz, led by a gay man who’d embrace them to be rid of Netanyahu.

This brings us to the benefit that comes to bluffers under Israel’s political system. Ra’am has been signaling since the election that it could back either the pro-Bibi or anti-Bibi blocs — and perhaps prefers the former. That denies the anti-Bibi camp the 61-59 victory that it appeared to have won. We are left with 57 seats against Netanyahu, 4 for Ra’am’s new kingmaker Mansour Abbas, and 52 for Netanyahu, with 7 for Naphtali Bennet’s rightist-but-anti-Bibi Yamina.

Yamina insists on playing both sides as well, in ungainly but effective ways that may yield the premiership for Bennet. So it’s important that Bennett met this week with Abbas. The math says that both of these clever cynics will need each other to maximize the payday.

Will the Israeli-Arab community at large put up with the possibility of Abbas keeping Netanyahu in power or backing another rightist? It may go over, because of Benny Gantz. A year ago the then-leader of the center-left offered the moon to the then-unified Joint Arab List, which won 15 seats after a massive get-out-the-vote campaign; he won their clear (and unprecedented) recommendation to the president, then struck a unity deal with Netanyahu instead.

The bitterness the perceived Gantz betrayal left behind was devastating for the center-left. It is manifest in the reduced Arab turnout last month (from almost 70% to under 50%), in the breakup of the Joint List and in the willingness of the conservative component to back Netanyahu.

Once upon a time, until sometime in the 1990s, the Haredi parties were seen as a balance of power. This allowed them to extort more monies and cultural concessions from the right; the right was also the natural home for religious radicalism tinged with a sense of Jewish superiority, and now they are a dependable mainstay there. The Arabs are in the midst of an opposite journey from a mainstay of the left to holding the balance of power.

Is it hopeless for the center-left? No. Putting aside that he represents a cultural point of view unpalatable to modern Israel, Abbas is wise to play both sides on behalf of a loyal minority so inelegantly treated by political allies who should have been desperate earlier and should have always known better.

This minority once didn’t mind being on the outside looking in, but increasingly it wants a genuine share of power, which Abbas is demanding. It also wants at least a correction to the Nationality Law to include explicit mention of equality. It wants an easing of building permit restrictions and a crackdown on the crime that police allow to run rampant in its areas.

These things can more easily be granted by the center-left. If its leaders are wise they will move fast. That includes the real leader of the camp, Yesh Atid head Yair Lapid.

If they fail, the result will be devastating for the center-left but perhaps not for Israel. A right-wing that depends on the Arabs may itself go through a healing process, redirecting itself away from the nationalist space (to use a kind descriptor) it so unfortunately occupies today.