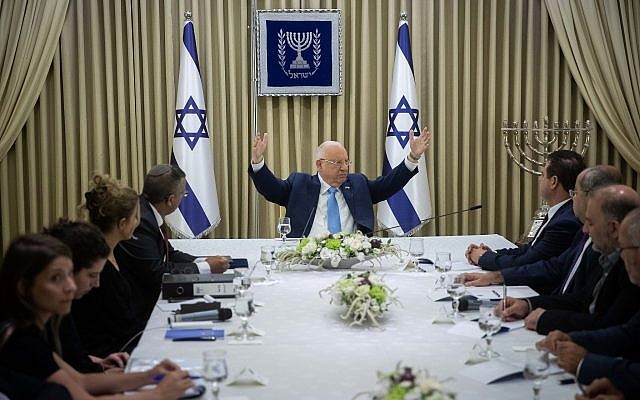 Members of the Joint List during a consultation meeting with Israeli President Reuven Rivlin in Jerusalem, Sunday, Sept. 22, 2019. (Photo by: Yonantan Sindel-JINIPIX via Jewish News)

If Israel were like any other Western democracy, the two main political groupings, Benjamin Netanyahu’s Likud and Benny Gantz’s Blue and White, would be reaching out to the next largest party to form a new coalition administration. That didn’t happen because the party that came third in the election garnering a record 13 seats in the Knesset was the Joint List, a coalition of the Arab parties. Nevertheless, the Arab List leader felt confident enough to recommend a Gantz-led administration.

Netanyahu has played a key and clumsy role in uniting the Israeli Arabs. His public denigration of Israel’s sizeable Arab minority, who make an enormous contribution to Israel society, was effective in bringing out the vote. Israel’s Arab voters increased their turnout to 60 percent in the September poll, up from 49 percent in the April election when there was more division.

In April, both the major parties declined to engage with the Arab politicians, regarding such approaches as poisonous. This time around Gantz did engage and has reached out to the Joint List chairman, Ayman Odeh. One supposes that a UK-style supply and confidence arrangement might be possible. Whatever shape the new administration takes, it will be impossible to ignore the views of the Joint List.

One of the hardest issues for Israel’s Arab community, the Druze, and other minorities has been the passage of the Nation State Law. Earlier this year, the British arm of the Abraham Initiatives (which I chair) held a forum on the role of Arabs in the media in Israel. Our Israeli Arab guest, Iman Safadi, a Druze woman working for Israel Defence Forces (IDF) radio, recounted how she and her community – who have fought alongside Jewish soldiers in every war since 1948 – felt: offended and alienated. The attempt to redefine Israel as a Jewish state only cut across the 1948 Declaration of Independence, with its promise of equal rights for minorities. It made Druze feel like outsiders in the country they loved and for which they fought.

Israeli Arab politicians have been part of the Knesset since the founding of the state, but have only very briefly been in government. The idea of having to fall behind the Israeli government when it is engaged in military operations against Palestinians would put them in an impossible position. Many have kith and kin across the Green Line and security barrier. Gantz has said he would be willing to work with the Arab parties. But as leading allies or an opposition block, it would be difficult to contemplate providing Mr Odeh and his team with access to intelligence and military briefings.

Of more importance at present to Israeli Arabs is the social, equality and economic agenda. In spite of being 20 percent of the population, they are greatly under-represented in government. Israeli Arabs have risen to the highest levels in economic development and the judiciary, but such appointments are the exception. The lack of presence in government jobs puts them at a disadvantage in making claims on state services from education to housing. Restrictive land use laws mean Israeli Arab villages find it difficult to expand beyond existing boundaries, creating a permanent housing crisis.

Netanyahu often weaponised Israel’s Arabs as pawns claiming, as he did this time, the authorities needed cameras in Arab polling stations to prevent cheating. Gantz gave interviews to the Arab media and embraced its social media.

This election offers hope that the Joint List and the wider population can be drawn closer into Israeli society. Israeli Arabs run many of the country’s pharmacies and are highly integrated in the healthcare system. If they are trusted to keep their Jewish neighbours healthy, social and political integration could go much further.

That is a real message of hope, from an indecisive election result, for 5780. Shana Tova.