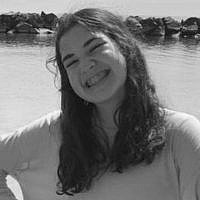 The Blogs
Eden Kraft
Apply for a Blog
Please note that the posts on The Blogs are contributed by third parties. The opinions, facts and any media content in them are presented solely by the authors, and neither The Times of Israel nor its partners assume any responsibility for them. Please contact us in case of abuse. In case of abuse,
Report this post.

Israel adopted an official humanitarian aid agenda in 1958, 10 years after its founding. In 54 years, Israel has provided aid to 140 countries, some of which do not even maintain diplomatic relations with Israel. They sent 60 tons of international aid to Indonesia and 82 tons to Sri Lanka following the 2004 earthquake, as well as supplies and shelters to thousands of suffering families following the 2005 earthquake in Kashmir, medical teams to storm victims in the Philippines in 2009, food aid to Congo in 2010, and saved thousands of lives following the earthquake in Haiti that same year. T

hey were among the first countries to send aid to Japan in response to the requests of the Japanese government following the 2011 earthquake, and also set up a field clinic there. Israel has sent out 15 aid missions over the past 26 years to countries suffering from national disasters, set up field hospitals, and provided medical care to over 2 300 people in these areas, saving hundreds of people from certain death.

Israel has both government and non-government organizations (NGOs) dedicated to mitigating global hunger, poverty, and disease. One such example is MASHAV, which stands for HaMercaz Lshituf Peulah Binlaomi (המרכז לשיתוף פעולה בינלאומי), Israel’s agency for international development cooperation. Its purpose is to share with the rest of the developing world all the technology that allowed Israel to have such rapid development. They assist in the medical field, rural, urban, and community development, education, agriculture, and more, by bringing people from developing countries to Israel for training, or sending their experts to these countries for long or short term periods. These experts conduct courses to educate the locals, or supervise and help with the day-to-day particulars of whichever  topic has been chosen by the local authorities. One example of MASHAV’s work is sending Israeli eye doctors throughout the developing world since 1959. These doctors set up camps with extensive equipment which is otherwise unavailable in the country, and treat preventable blindness and other ocular diseases.

Save A Child’s Heart is another example of an Israeli non-profit NGO that helps children in developing countries with severe heart conditions receive life saving treatment, at no cost to their families. The children are flown to Israel, given whatever treatment they need, and they remain there to recuperate until they are able to safely return to their native countries. Approximately 50% of the children who come to Save A Child’s Heart are from the Palestinian Authority, Gaza, Iraq, and Morocco, over 40% are from the rest of Africa, and the remaining children are from Asia, Eastern Europe, and the Americas. The doctors have treated over 5 000 children since its founding in 1995. Save A Child’s Heart also brings doctors from partner sites around the world and trains them in pediatric care at the Wolfson Medical Center in Israel, so that they can go home and help the children in their native countries. One such example is Dr. Ahmed Zarour, who was born in a village in the West Bank. Dr. Zarour is in his 7th and final year of training in pediatric cardiac surgery at Wolfsons Medical Center, and hopes to return home as the first fully-trained Palestinian pediatric cardiac surgeon. He dreams of building the first pediatric cardiac surgery department at the hospital in Ramallah. Other doctors currently training in the Wolfson’s Medical Center include Dr. Stella Mongela and Dr. Alex Loth from Tanzania, Dr. Yared Agidew Awano and Dr. Yayu Mekonnen from Ethiopia, among others. On average, Save A Child’s Heart saves a life every 24 hours.

It is crucial to publicize the many acts of humanitarian aid performed by Israel, and its role in the global war against poverty, hunger, and suffering, to dispel the notion that Israel is a centre for human rights violations and inequality. The media, with the help of the United Nations, tends to paint Israel in a negative light and we must be able to counter this, both to others and to ourselves, with the indisputable facts of the humanitarian aid which Israel and Israelis consistently deliver. Most people are unaware of this side of Israel, simply because it is so hard to discover. A simple Google search of “Israel and human rights” turns up a full page of articles documenting the many ‘human rights violations’ in Israel. How can one with no background knowledge about Israel be expected to look any further than this initial search? There’s no need to even read the articles! The only way to combat this mass of misinformation is by sharing the truth about Israel and its humanitarian acts, so that the next person who searches “Israel and human rights” will see articles like this instead of being hit by an onslaught of lies and biased views.

About the Author
Eden is a 16-year-old high school student in Toronto, Canada. She is currently a mentor for the Hasbara Fellowships Canada High School Internship, where she learns how to effectively advocate for Israel.
Related Topics
Related Posts
Comments