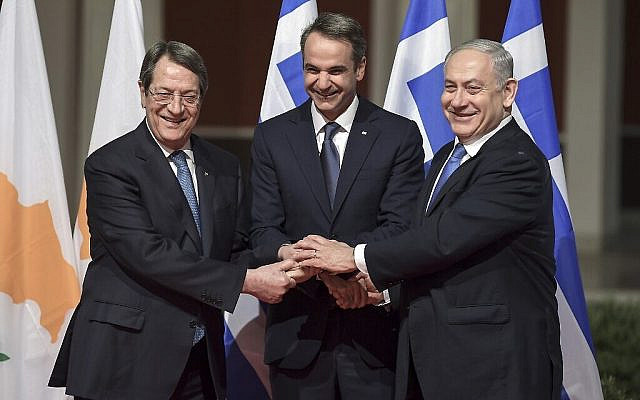 Greek Prime Minister Kyriakos Mitsotakis (C), PM Benjamin Netanyahu (R) and Cypriot President Nikos Anastasiadis shake hands in Athens on January 2, 2020, ahead of the signing of an agreement for the EastMed pipeline project designed to ship gas from the eastern Mediterranean to Europe. (Photo by ARIS MESSINIS / AFP)

During the last week, earth-shattering events occurred that completely disrupted the Middle East, caused intense anger in certain Arab and Muslim capitals, and threatened war in the region. In other news the Americans assassinated Iranian General Qassem Soleimani.

The non-Soleimani news that rocked the Middle East involved natural gas. On January 2, Greece, Israel and Cyprus signed an agreement to build a pipeline to transport natural gas 1,300 miles from Israel’s Leviathan natural gas field in the Mediterranean first to Greece, then to Italy, and from Italy into the heart of Europe. Scheduled for completion in 2025, the “EastMed pipeline” ultimately might provide 4% of Europe’s natural gas imports. It also would compete with two pipelines being built by Russia, the NordStream 2 pipeline in the Baltic Sea to Germany, and the TurkStream project from Russia to Turkey.

Turkey has reacted furiously to the EastMed project. The Turks have threatened that they will block any exploration of that part of the Mediterranean that does not include Turkey. Indeed, Turkey and Libya entered into a bizarre agreement last month that supposedly gave those two countries exclusive rights to explore a part of the Mediterranean between their two countries. The Turks have gone so far as to chase Cypriot vessels away from exploring for natural gas in Cypriot waters and have sent their own ships to explore in Cypriot waters. If Turkey tries this against Greece or Israel, things might not go so smoothly for the Turks.

Meanwhile, the first shipment of Israeli gas from the Leviathan field was delivered to Jordan on New Year’s Day, much to the chagrin of many Jordanians. Jordan has been receiving Israeli gas from the smaller Tamar field since 2017, but the Leviathan gas increases Israeli exports to Jordan dramatically. Jordan’s main political opposition, The Islamic Action Front, called the delivery of Leviathan gas a “black day in the history of Jordan, and a crime against the nation.” A memo has been filed in Jordan’s parliament requesting that a law be drafted to ban the import of Israeli gas, but previously the Jordanian constitutional court ruled that the Israeli-Jordanian gas agreement did not need parliamentary approval.

Jordan wasn’t the only country to receive Israeli natural gas on New Year’s Day. Egypt did as well. Israel and its US partner Noble Energy reached a $15 billion agreement in 2019 to supply 64 billion cubic meters of gas to Egypt.

Suddenly, Israel is a regional power in natural gas. This gives Israel substantial energy independence, and it provides Arab countries like Egypt and Jordan with a more stable supplier of energy than they had previously. Of course, Israeli energy exports stand on their head the traditional trading relationships of the Middle East. Also, they give the rejectionist front in the Arab world a new and very public target. Simultaneously, Israeli gas exports place a key choice before the ruling classes of Jordan and Egypt. If they reject the Israeli gas and maintain their policy of keeping Israeli at arm’s length with a very cold peace, they maintain their ideological purity but risk their own people revolting against the resultant economic deprivation. That already is happening in Lebanon, Iraq and Iran. Conversely, they can take on their rejectionists and lead the Middle East into a new era.

As much as the impact of the Soleimani assassination, the decisions involving Israeli natural gas being made now in Egypt and Jordan will set the tone on the future of the Middle East.