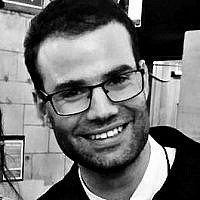 The Blogs
Yorai Hertzano
Apply for a Blog
Please note that the posts on The Blogs are contributed by third parties. The opinions, facts and any media content in them are presented solely by the authors, and neither The Times of Israel nor its partners assume any responsibility for them. Please contact us in case of abuse. In case of abuse,
Report this post.

A delegation from Young Yesh Atid travelled to London last week for a campus advocacy tour. It was headed by MK Elazar Stern, a celebrated IDF major general and one of the most unique voices of Jewish Orthodoxy in the Knesset. The event was a direct continuation of the efforts made by Yesh Atid and its leader, Yair Lapid, to fight the lies of those who seek to delegitimise Israel.

It was a result of cooperation with the Pinsker Centre, a group of graduates who seek to educate intelligently about Zionism and the Arab-Israeli conflict. During our visit, we had fascinating meetings with Minister Andrew Percy, MP Ian Austin, Luke Akehurst of We Believe In Israel and Michael McCann of the Israel Britain Alliance – all great friends and supporters of Israel.

But we really came to make the case for Israel on campuses. We visited Oxford, Cambridge, UCL, LSE and SOAS and spoke to hundreds of students. We come from the leading opposition party in Israel and at home we are the leading alternative to Likud, with Yair Lapid the main candidate to replace Benjamin Netanyahu. But when defending Israel, we are united. So, we left our differences at home. We might have disagreements with the prime minister and his party, but we are all patriots who love our country and believe in the fundamental justice of our cause.

Aside from two incidents of anti-Semitism, we were welcomed by halls packed with students who were eager to listen and ask questions.

We spoke about the values shared by Israelis and Brits, especially young people.

As former soldiers and officers (and serving reservists), we discussed the centrality of IDF’s ethical code of conduct to our time in the military. We spoke about our commitment to an agreement that would ensure Israel’s security and its identity as a Jewish and democratic state.

The atmosphere was unpleasant and, at times, even hostile. We heard from Jewish students who swapped their kippah for a baseball cap and hide their Star of David necklaces while walking through campus. The anti-Israel movements use the language of human rights and justice, but they are driven not by opposition to Israeli policy but to the core idea of Israel, to the Jewish people’s right to national self-determination. They are driven by anti-Semitism.

We found a strong, diverse and proud Jewish community ready and willing to fight back. A community that loves Israel and shares our commitment to ensuring its future as a Jewish and democratic country. We heard of the difficulties they face and their determination to stand strong. Many students stopped at our stand and said our presence on campus was a refreshing change from the stream of anti-Israel activists promoting distorted and one-sided agendas.

We have a responsibility not to leave the Jewish community to face the challenges alone. We must become engaged with the life of your community and provide support to those making Israel’s case. We need to combine our knowledge and first-hand experience of Israel with the knowledge and experience of local pro-Israel communities. We need to combine the resources Israel can provide with local coordination to ensure those resources are put to the best use. We need to build a coherent, unified strategy against those who defame Israel and tailor it to each specific arena through the people on the ground. We need more initiatives that bring young Israelis to your campuses and more initiatives that bring young people to Israel.

Standing wrapped in the blue and white flag of Israel alongside Jewish students was a moment of great personal and national pride for our delegation. We know Israel has friends in the UK Jewish community and you have friends here in Israel. We’re stronger when we stand together.

About the Author
Yorai Lahav-Hertzano is a Member of Knesset with Yesh Atid.
Related Topics
Related Posts
Comments