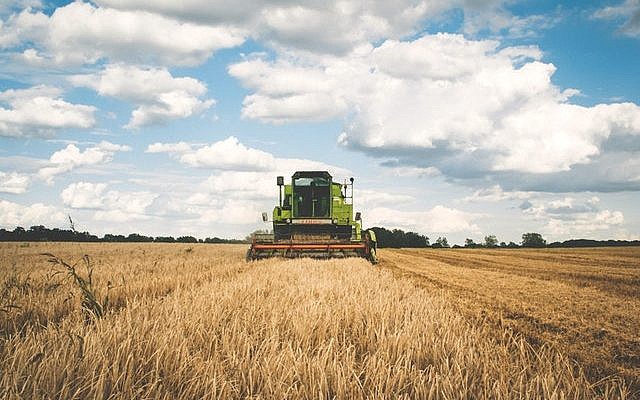 Israel’s geography is not naturally conducive for agriculture, with deserts taking up more than half of its land area, while its climate and lack of rainfall and water resources also not favorable of farming. On the other hand, roughly twenty percent of Israel’s land is naturally arable and capable of being plowed and used to grow crops. Despite these tough growing conditions Israel is still a major exporter of fresh produce and is also considered to be a leader in producing agricultural technologies and software. Agriculture represents around two and a half percent of Israel’s GDP and around three and a half percent of its exports. Israel still produces around ninety-five percent of its own food requirements which is supplemented with imports and trade.

While the importance of farming in Israel has fallen over time (in regards to its GDP), Israel has made steady progress in its farming and harvesting output and efficiency. The area of irrigated farmland available has also increased significantly from 74 thousand acres in 1948 to around 460 thousand acres today. Using the latest advancements in technology, Israel’s agricultural production rose around 26 percent between 1999 to 2009, while the total number of working farmers had dropped from around 23,000 farmers to 17,000 farmers. While employment has fallen in this industry due to technological advancements, farmers have also been able to grow more produce using less water. They have been able to use 12% less water to grow around 26% more crops and output. This increased output with reduced input is only possible due to the advancements made in agricultural technology such as the development in vermiculite (a type of soil conditioner) new types of seeds, and new types of plants.

Israel grows a wide variety of different agricultural products such as flowers, fruits and vegetables, fishing, livestock, and crops according to Israel’s Ministry of Economy and Industry. The most commonly grown flowers are the wax flower and roses. Israel has become a major player in the flower market because they have become a supplier of traditional European flowers during the Winter season. Regarding fruits and vegetables, Israel is one of the leading fresh citrus producers and exporters of the world. Most saltwater fishing takes place in the Mediterranean Sea, while most freshwater fishing occurs on Lake Kinneret. According to the Israel Central Bureau of Statistics, Israeli cows produce the highest amounts of milk per creature in the world, with around one and a half million liters of cow milk produced annually. The most popular crops grown are wheat, sorghum, and corn.

There are also new trends in the agriculture industry that Israel has been capitalizing on effectively. For example, organic produce has been steadily on the rise in Israel and accounts for around thirteen percent of its agricultural exports.  Organic food has had very strong growth over the past decade as people are becoming more conscious of what they eat and how they eat, along with other health trends like veganism, body detoxes, and soy-based products.

As farming becomes more and more technologically advanced, Israel’s technological savviness should be playing a larger role in the global agricultural industry. Israel has effectively increased its agricultural output while lowering it agricultural workforce, water consumption, and other inputs. If Israel continues this trend of innovation and adaptability, its agriculture industry should continue its rate of growth into the foreseeable future.