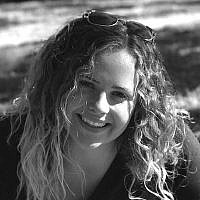 The Blogs
Caroline Flannery
Apply for a Blog
Advertisement
Please note that the posts on The Blogs are contributed by third parties. The opinions, facts and any media content in them are presented solely by the authors, and neither The Times of Israel nor its partners assume any responsibility for them. Please contact us in case of abuse. In case of abuse,
Report this post. 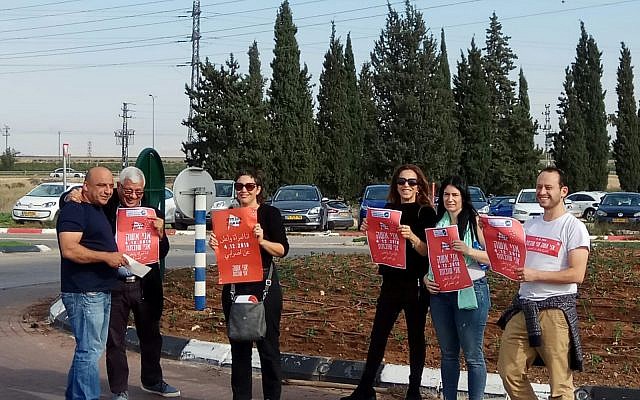 I remember my confusion during my first Ulpan lesson when our instructor changed our material from beginner phrases like “where is the bathroom” and “what time is it”, to teaching us “there is a strike today”. I thought to myself, why are they teaching us this on the first day? This doesn’t seem like something I will ever use; labor strikes aren’t something I typically talk about!   However, throughout my time in Israel, I have come to see that Israel utilizes organized collective labor strikes as a way to invoke governmental action and social change. This week, for the first time, I had the opportunity to participate in one.

A state-wide strike had been called for Tuesday after two teenage girls were murdered; bringing the number of women killed in the past year as a result of domestic violence incidents in Israel to 24, the highest number in decades. The strike’s aim was to demand that the government transfer 250 million NIS to a program combating violence against women. While the budget was approved almost two years ago, only ten percent of the 250 million has been given so far. With the necessary funding, this program would support a public rehabilitation program for victims of domestic violence, a rehabilitation program for offenders, education and awareness efforts, and policy change in the police’s approach to domestic violence incidents. After hearing the details of many of these murder cases, I see the need for this funding more than ever.

When I came into work on Monday, the day before the strike, I was surprised to be  approached by the directors of the Abraham Initiatives, asking me to come with them to protest for 24 minutes in Lod. I followed the directors to the intersection near our office, and we stood with promoting the strike. While we received a pretty positive reaction (a lot of thumbs-ups, smiles, and honking) I wondered if everyone knew what we were protesting since there was no mention of the violence on the signs, it just read “I’m a woman, I’m striking”. Would the people driving by understand the context of this strike? Do most Israelis know that violence against women is a growing problem in Israel? And do they care enough?

On November 26, Yara Ayoub, a 16-year-old girl, was found dead in a dumpster in the northern village of Jish. Five suspects have been arrested in connection with her murder so far.

The same day, Sylvana Tsegai, a 13-year-old Eritrean asylum-seeker, was found dead by her mother in her home in South Tel Aviv. Tsegai was sexually assaulted and murdered by her mother’s ex-boyfriend, who had been reported to police days prior for showing up at their home.

The morning of the strike, I headed to Tel Aviv to join a demonstration in Dizengoff Sqaure. Demonstrations were taking place all across the country, and this one called for a 24-minute moment of silence to honor each woman murdered.  I was nervous about finding the location, but luckily, they were hard to miss. A crowd of activists dressed in black crowded around the fountain in the square, some crying and hugging, others shouting passionate calls for action. The lead organizer of the event circled around the fountain, reading the names of all 24 women murdered. One activist stressed the importance of questioning corporations that claim to support this cause. Just because they put out a supportive statement does not mean they are really helping. According to her, they should be donating money to the organizations on the ground trying to make change. “Where is their money really going? What are the really doing with their power,” she shouted.  She also made the point that attending this demonstration is not enough. “We cannot stop putting pressure on the government until they show us that they will fulfil their duties to protect women,” she said. “We will not stop until we get more than empty words”. While these demonstrations have reached national attention and dominated media coverage for the past few days, is it enough to force government action?

Demonstrations continued across the country throughout the day. Activists dyed public fountains red to symbolize the blood of the murdered women, blocked traffic, and lay on the street covered in fake blood. On Tuesday night, 30,000 activists gathered in Tel Aviv and showed how powerful Arab and Jewish women can be when they unite. Ads for the protest were sent out in Hebrew, Arabic, English, Russian, and Amharic, allowing the space to serve as a bridge between cultural divides. Leaders and family members of the victims gave emotional speeches and spoke about the need for change. The speakers were a mix of all ages, ethnicities, religions, and cultural backgrounds and the diverse crowd showed the uniqueness of this protest. Arab and Jewish women stood in the crowd together, including modern, young women, but also older women dressed in traditional garb. This shows a progressive change in Arab Israeli society and highlights their desire to push for change for their communities. One of the protesters that I spoke with told me that Arab women have always been divided over collaborating with Jewish women for the fear that it would lead to an even worse atmosphere for the Palestinian people. When I asked her why she thought this movement was able to unite Jews and Arabs, she told me that although Arab women have been protesting violence against women in their community on their own, it always seemed like the authorities wanted to ignore them, but now with the strength behind this movement, they can finally be heard.

Although Arabs only make up 20 percent of Israel’s society, nearly half the women murdered in Israel are Arab. This disproportionate statistic shows that the Arab community is particularly in need of resources to combat the multi-layered discrimination that they face. They have to deal with being an Arab woman in the context of Arab society, as well as an Arab and a woman in Israeli society. The reasons for high levels of violence in Arab communities is highly disputed. The Arab community has long dealt with police inaccurately referring to murders in their communities as an “internal cultural problem” or “honor killings”.  This type of labeling deters police from investigating and holding murderers accountable, allowing the violence to continue. Distrust and hostile relations between Arab society and the police create obstacles in solving crime and improving safety in Arab communities. Police say that witnesses often refuse to cooperate during investigations, retracting statements and even deleting security footage. But Arab leaders reject those statements, saying that police are failing Arab communities by not using their resources to solve criminal cases, and point out that when women do reach out to the police for help, they often wind up dead afterwards. We cannot ignore the issues that leaves Arab society, particularly women, vulnerable to violence. The hope for many demonstrating in this protest is that Israeli society will start to see these issues as more than just a problem for women or Arabs, and that the government will start to treat it like any other legitimate political and social issue. 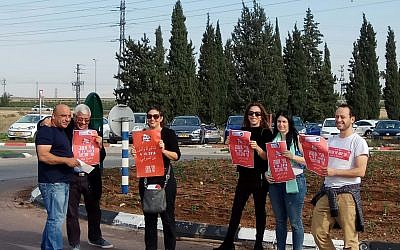 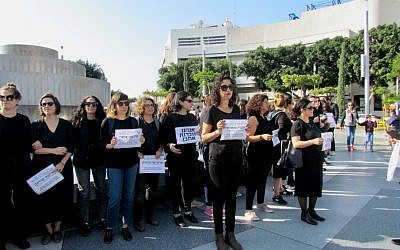 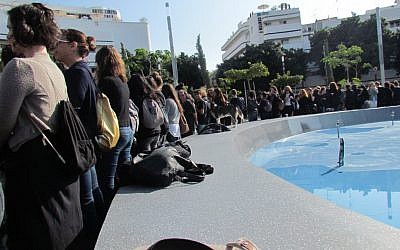 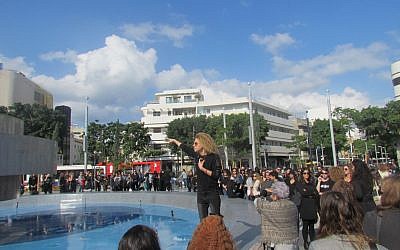 Demonstration Tuesday morning at Dizengoff Square
About the Author
Caroline Flannery, a New York native, is a recent graduate of Towson University, where she studied Mass Communication, Journalism and New Media. Caroline is passionate about social justice and human rights and recently completed an internship with the American Civil Liberties Union. She is now living in Israel, where she is participating in a social-change fellowship based in Lod. Through this fellowship she will be working with minority populations and partnering with local NGO's and schools to implement sustainable change. She is also an intern at The Abraham Initiatives, whose mission is to achieve equality for Israel's Arab and Jewish citizens and promote a shared society.
Related Topics
Related Posts
Comments