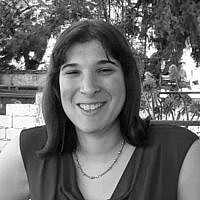 The Blogs
Carra Glatt Ben-Baruch
Apply for a Blog
Please note that the posts on The Blogs are contributed by third parties. The opinions, facts and any media content in them are presented solely by the authors, and neither The Times of Israel nor its partners assume any responsibility for them. Please contact us in case of abuse. In case of abuse,
Report this post.

For a brief, insane moment last June, event halls reopened for gatherings of up to 250 people. During that time, my aunt, who owns an apartment in Netanya and has spent summers there with her Israeli-born husband for the past forty years, was forbidden from entering the country, even had she been able to present a negative COVID test and agreed to quarantine for two weeks in a hotel.

Even as the premature optimism over Israel’s victory over the first wave of COVID-19 gave way to the reality of the much more serious second wave, life resumed a semblance of normalcy. Restaurants and gyms opened. Most people returned to work. But an American-Jewish widow whose only child had made aliyah would still have been forbidden from entering the country to see her daughter and grandchildren, even had she been able to present a negative COVID test and agreed to quarantine for two weeks in a hotel.

In the fall, most of the school system reopened. Synagogues were permitted to resume indoor services, albeit at limited capacity. Indoor Chanukah parties of up to ten people were allowed, and Israelis rushed to take pleasure-trips to Dubai. Yet, when I said goodbye in September to my parents – who had been permitted to enter Israel for my wedding under a sensible and compassionate policy that has since been rescinded – it was with no way of knowing when my government would allow me to see them again. Even if they presented a negative COVID test and agreed to quarantine for two weeks in a hotel.

At the time, I took comfort in the fact that my parents had begun the aliyah process. Now, for the first time in the country’s history, aliyah, too, has been suspended, I cannot even rely on that. And in any case, aliyah is a lengthy process that isn’t an option for many families of olim.

I love this country. I loved it enough to come here on my own three and half years ago, and I will consider it the privilege of my life to, G-d willing, soon raise children here. But I made aliyah in part because I took seriously the idea – reinforced at every Birthright and Nefesh b’Nefesh event – that Israel was the homeland of all the Jewish people, whether or not you currently live there.

Apparently, I took it more seriously than my government does. Officials are fond of calling upon the special status of Israel as a Jewish state when they want the support of diaspora Jews. What are those words worth when, with a very few exceptions, no Jew not bearing Israeli citizenship has been allowed into Israel for nearly a year? When diaspora Jews who heeded those calls in the fullest sense by becoming olim and making their lives in Israel face the prospect of indefinite separation from their loved ones?

As Ben-Gurion airport remains closed, concern among olim and their supporters in the government has naturally focused on the immediate crisis of a cruel policy that – as outlined recently by former MK Dov Lipman in The Times of Israel – has seen Israelis separated from their young children and prevented from visiting the bedsides of dying parents. But precedent suggests that long after the current restrictions have been eased, Israel will remain closed nearly completely to non-citizens, no matter how strong their ties to Israel, while recent reports suggest that Greek tourists will be welcome long before the families of American olim or major Jewish supporters of Israel, vaccinated or not.

This cannot be justified by concerns for safety, which would be well satisfied by requiring a negative Corona test or proof of vaccination in order to board a flight and mandating a government-supervised quarantine for all arrivals. Such a policy would in practice keep out all but the most committed non-citizens, resulting in a modest increase in travelers who would, in any case, pose no greater threat than any Israeli citizen returning home. And while the latter group may well have been a significant source of infection thus far, the failure of permissive policies that allowed nearly unrestricted travel and left enforcement of quarantine largely to the honor system is not an argument against cautious policies that test and monitor arrivals both before and after entry.

Rather, the failure of our leaders on this issue speaks to a lack of regard on the part of officials for whom it is simply easier to make a blanket ban than to work out a rational, sensitive policy that respects Israel’s broader commitment to world Jewry and its more particular commitment to those of us who have chosen to continue the Zionist vision through aliyah.

Sal Klita and Arnona discounts are a nice gesture.  But until you can tell me when it will be legal for me to see my parents again, anything you can give me is worthless.

About the Author
Carra Glatt Ben-Baruch is a lecturer in English Literature at Bar-Ilan University. Raised in New Jersey, she made aliyah from Boston in 2017.
Related Topics
Related Posts
Comments