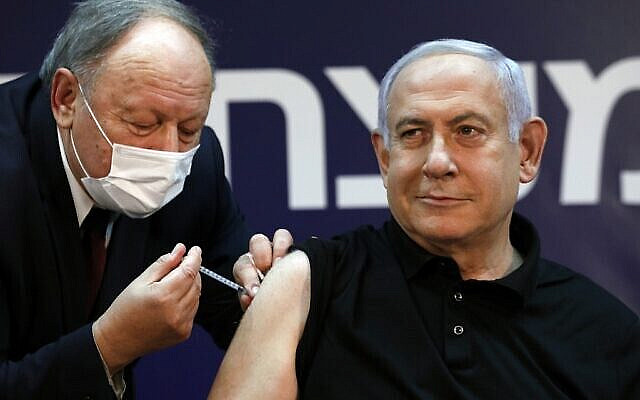 Prime Minister Benjamin Netanyahu is running on a COVID ticket in the coming election, so the time is right for a dispassionate coronavirus accounting.

Much is said about Israel’s world-beating vaccine rollout: the country is by far number one in vaccinations per capita, covering half the population and the majority of adults. But its overall performance offers little else to crow about.

Regarding fatalities, Israel similarly is closer to the worst than to the best. It has suffered 630 deaths per million, which is not as bad as some countries like Britain (1,810) and the US (1,593) but worse than most countries in the world and almost double the overall world figure of 329. Moreover, Israel’s fatality rate would have been even more devastating if not for the fact that its population is far younger than that of all Western countries and therefore less vulnerable.

Israel’s performance is especially unimpressive when compared to other nations that could conceivably isolate from the outside world. These are the so-called “island nations” that are either literally islands (like New Zealand or Cyprus) or for various reasons can detach from their surroundings, as Israel can with its one major international airport and tightly controlled land crossings.

In a TV interview last week, Netanyahu denied Israel was an “island state” by arguing that it was “wide open” to Palestinians. But the claim does not hold water.  First, Israel when it wishes to has an iron grip on Palestinian entry, not only into its sovereign territory but also in and out of the “autonomy” zones. Second, the Palestinians were for a long time showing low infection rates (probably due to their own isolation), have only recently started to catch up (possibly importing the virus from Israel), and are still well behind. And third, even as Israel accumulated surplus vaccines (even offering them to some other countries), it refused to help the Palestinians vaccinate (as I recommended on these pages), despite the self-interest implicit in Netanyahu’s claim.

So if it’s not the Palestinians’ fault, how did Israel fail this way? Did it not move quickly enough to take measures? After all, Netanyahu was among the first world leaders to seize on the coronavirus as a major crisis.

Indeed, he started sounding the alarm immediately after effectively losing the last election, on March 2, 2020 (by 62-58 seats).  In increasingly agitated TV appearances he warned of tens of thousands of deaths by year’s end, and argued that it was such a calamity that Israel could not risk a change in government. That Benny Gantz became the only opposition leader in the world to fall for such a ruse, after being tasked with the president to form a government himself, testifies as much to Netanyahu’s purposefulness as it does to his erstwhile challenger’s pitiable credulity.

The “unity government” then took steps that were among the most drastic in the world.  The Oxford University project ranking severity of restrictions gives Israel a score of 87, higher than every major country in Europe (Italy gets 79, France 64, Spain 72, and Russia 46) and higher than the US with its paltry score of 68. Simply put, no other country came close to having three national lockdowns totaling over five months of the past year.

Why did this sacrifice not bear sweeter fruit? There are a number of reasons, mostly to do with systematic violations of the pandemic guidelines.  This occurred among all population groups but was especially dramatic in the Haredi and Arab sectors (which together account for a third of the population).  Part of the problem is that these groups (especially the Haredim) live as large families in crowded apartments, making the lockdowns especially irksome; the problem is also that many among these groups (again especially the Haredim) have an ideological foundation for ignoring the will of the state.

Why were the guidelines not more strictly enforced? That is where it gets interesting. Facing trial on charges of bribery, fraud and breach of trust, Netanyahu is fighting like mad to retain the high office from which he can delay proceedings and engineer immunity schemes. And he cannot retain power without the support of the Haredim.

The first hint of what was coming came when the government, despite Netanyahu’s own dire warnings, was late to shut down the airport a year ago, leaving the country wide open to arrivals — disproportionately Haredim from the US.  Then came the Purim festivities days later which proceeded unimpeded, especially in the Haredi sector, and these are generally accepted as the first super-spreader event in Israel.

Then came the government’s rejection of expert advice to enact a differentiated “traffic light” lockdown system in which only “red” areas would shut down.  That is what other countries did — but in Israel, the top 20 “red” areas last summer were all Haredi or Arab. So all of Israel had to stay open (leading to the second wave) and then collectively shut down (battering the economy).

Swiftly it emerged that significant elements within the Haredi sector kept schools open in violation of the guidelines, and until the inevitable uproar the police enabled this to go on. Similarly, Haredim were allowed to get away with mass funerals, prayers, weddings and more (they were not completely alone, but the disproportion was clear, and extreme).

Moreover, the government did little to beef up hospitals, ignoring pleas to temporarily staff up. This, when Israel has 2.98 hospital beds per thousand inhabitants compared to 7 in Austria, 4 in Greece and 6 in France), placing it close to the OECD bottom (the rank in overall healthcare expenditures is similar). Thus were millions saved while billions were sacrificed on lockdowns justified on the grounds of system incapacity (while Netanyahu in June demanded tax refunds worth about a million shekels, $300,000).

This fascinating mix of incompetence and impudence would see most governments defenestrated with dispatch. It is unclear if this will happen, but around December the public lost faith in COVID policy, leading to the third wave and lockdown — which, like the second, could have been differential but was not, for the same obvious political reasons.

Netanyahu could have been a great newspaper editor. He identifies the essence of things, and thus did he seize on the surprisingly quick development of vaccines with an alacrity quite unlike that of any other leader on the planet.

Israel is well-positioned to be a vaccination laboratory because its population of almost 10 million is small but untrivial and concentrated conveniently along the coast. Its health care system is among the most dependable, centralized and digitized, it was willing to share patient data and it is rich enough and determined enough to pay whatever it takes.

Netanyahu deserves his share of credit for this coup, despite the vulgarity of his daily crowing about his personal “bringing” and “preparing” of the vaccines.  But to reward him for Israel’s COVID performance would be akin to being grateful to the burglar for returning the next day with a great deal on insurance.