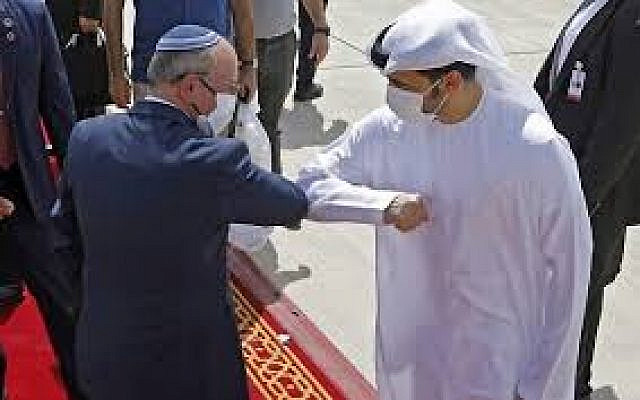 Focus on conflict so dominates reporting about Israel that although Emiratis and Israelis are celebrating, and now Serbia and Kosovo have signed a “landmark agreement,” many US and UK journalists seem indifferent, even resistant, to the sea change of normalization that is taking place.

“I literally cannot find a single US news outlet that has reported on the content of the historic Serbia-Kosovo deal,” writes US Envoy for Serbia and Kosovo Richard Grenell, taking to Twitter to vent his frustration.

Grenell, who served for 10 years in the State Department and was US Ambassador to Germany, directs readers to his own article published under “Opinion” in The Hill. There he outlines some of the steps made by Kosovo and Serbia “toward economic normalization and an eventual, peaceful coexistence…Perhaps most importantly of all, Serbia has pledged to move its embassy in Israel from Tel Aviv to Jerusalem, while Kosovo has agreed to mutual recognition with Israel.”

Likewise, the monumental breakthrough that is the UAE-Israel peace and normalization agreement has received strangely muted and conflict-centered coverage.

BBC seems to emphasize what has not happened, that the Abraham Accord does not involve the Palestinian Authority. Rather than hearing about Israel’s first peace and normalization agreement in 26 years with an Arab country, “BBC audiences repeatedly heard that the Palestinians had been ‘stabbed in the back’, ‘betrayed’ and ‘sidelined’ by an agreement portrayed as ‘treason.’”

In CNN’s analysis it is “…a poor man’s facsimile for the, as yet, unachieved grand bargain between Israelis and Palestinians to quell their decades of conflict.”

The Guardian makes explicit its view of the Accord in their “Observer Opinion” criticizing “the deal” as something that will come to be seen as “a historic mistake.” There is no discussion of peace or normalization between Israel and UAE. Instead, the Guardian writers focus on their dislike of the world leaders involved. With a peace agreement to report on, the Guardian addresses conflict.

On the night of the peace deal, the US news shows, except for FOX, pretty much avoided what should have been breaking news.

In “A Great Step Forward, and Who Seems Determined to Ignore It,” Colonel Richard Kemp notes that the Accord–which he considers Nobel Prize worthy–“received a cool reception in much of the US and international media.” Describing the Accord’s significance, Kemp writes:

“This week, we witnessed a symbol of perhaps the greatest step forward in world peace for decades. The first-ever direct passenger flight from Israel to the United Arab Emirates flew down the length of Saudi Arabia’s airspace. After Egypt in 1979 and Jordan in 1994, the UAE has become the third Arab state to normalise relations with the State of Israel under the new Abraham Accord.”

Yet, the LA Times headlines their story about that first EL AL flight from Tel Aviv to Abu Dhabi: “Despite pressure from Trump, Arab nations resist normalizing ties with Israel.”

It’s hard to fathom this headline for an article ostensibly about the “normalizing ties with Israel” that are actually happening. Certainly, the LA Times knows that other countries including Bahrain, Oman, and Morocco have already expressed interest in following UAE’s lead.

The article asserts that “no other Arab nation has said it is willing to take the long-shunned leap to accept and recognize Israel as a legitimate Mideast neighbor, at least not until Israel resolves its conflict with the Palestinians.”

But clearly this is not the case. The Saudis historic step did take place. And the UAE seems to be leading the way for other countries that are now engaged in discussion about establishing normalization with Israel.

Neither the UAE-Israel agreement nor the decisions of Kosovo and Serbia had to do with “conflict with the Palestinians.”

This is a story of peace, not conflict.