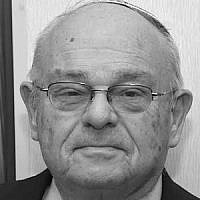 The Blogs
Mendy Ganchrow
Apply for a Blog
Please note that the posts on The Blogs are contributed by third parties. The opinions, facts and any media content in them are presented solely by the authors, and neither The Times of Israel nor its partners assume any responsibility for them. Please contact us in case of abuse. In case of abuse,
Report this post.

On September 13, 1993, I sat on the White House lawn as late Israeli Prime Minister Yitzhak Rabin and then Palestine Liberation Organization (PLO) leader Yassir Arafat signed the Oslo Accord. As the crowd stood to applaud that infamous handshake, tears rolled from my eyes. On the one hand, I fantasized about a true and longstanding peace agreement between Jews and Arabs, yet the realist within me understood that this great showmanship, would never stand the test of time.

Approximately three days before Israel and the PLO announced their agreement, I was part of a very small group led by US Senator Harris Wofford (D-PA) that met privately with the Rabin in his office. I asked the PM, why he was involving himself with the PLO’s leadership who at the time seemed to be losing political control within the Palestinian Arab populace. I posited that three years down the road, the PLO would likely no longer be in power and Israel could theoretically deal with a more responsible Palestinian leadership.

Rabin answered that without the Oslo Accord, in less than three years, the far greater terror, Hamas would likely defeat the PLO. The Oslo Accord would empower the PLO to overwhelm Hamas. In that time, Hezbollah would overcome the Lebanese.

The warning flares of Islamic fundamentalism (he called it “Khomenism without Khomeni”) would endanger the region. The Oslo Accord would in effect “nip it in the bud.”

Therefore, he stressed, the Oslo Accord was in the short and long-term interests of Israel.

Two years later, on September 21, 1995, I testified before the House Committee on International Relations. on behalf of most US-based Jewish Modern Orthodox groups. It had become quite clear that the continued call for ‘Jihad’ by the PLO, its failure to destroy Hamas, and its support of terrorism all pointed to the failure of the Oslo Accord, despite its good intentions. The PLO and Arafat’s demands for Jerusalem and the return of the so-called “refugees” were merely a step toward the elimination of the Jewish State.

Fast forward to 2017, and the latest Fatah-Hamas agreement offering little hope for a disarmed Hamas or a peace partner with Israel. Hamas and Hezbollah serve as Iranian puppets, and the Palestinian Authority’s corruptness, ineptness, lack of funding, and incitement towards terrorism by supporting and praising terrorists only further disproves this unity being the realizing of the dreams for a peace partner in the Middle East.

Now as these three entities move closer towards the Iranian terrorist theology, perhaps it’s vital that we revert back to the basics, and ask ourselves: Who in fact are the Palestinians?

Former Speaker of the House and Historian Newt Gingrich summed it up succinctly “Palestine is an invented people, who want to destroy Israel.”

The word “Palestine” comes from the word “Palestina” chosen by the Roman Emperor Hadrian in 135 CE to force the Jews to forget about Judea after their defeat in the Bar Kochba revolt. During the Ottoman rule from 1517-1918 there was no Palestine as a national entity. There has never has been a separate Palestinian culture, religion, language or ethnicity separate from the other Arabs nations bordering Israel.

IN TRUTH, history reveals there was never such an entity as the Palestinian people or Nation. The local Arabs always considered themselves part of Greater Syria or from some tribes such as Hejaz.

The Arab population living in British Mandate ‘Palestine’ migrated from as far away as Afghanistan, coming to work for the Turkish Ottoman Empire, and later the British to build the railroad and Haifa.

When peace will eventually come to the region it will be between Israel and the Sunni nations such as Bahrain, UEA, Jordan, Qatar, Egypt and Saudi Arabia, and not with the PA and other Iranian puppet organizations.

Rabin was a great hero, well intentioned however history has shown that not all well-intentioned acts turn out well. Hamas is alive and with its cousin Hezbollah pose great harassment and potential harm to Israel. Iran and Islamic fundamentalism were unaffected by Oslo and will require time and patience to overcome, even if Iran is made impotent.

It is time to admit the Oslo Accord and even the idea of a Two-State solution was not and is not the answer.

When, with the help of the Almighty, Iran implodes, the PA, Hamas and Hezbollah will no longer be functional actors in the Middle East drama. Then an alliance between the Israel and the Sunni States, like the one discussed in my recent book, will be able to work towards a mutually beneficial and healthy relationship between all groups living in the region.

About the Author
Mendy Ganchrow, MD is a retired surgical professor and past president of the Orthodox Union. He is the founder of the Hudson Valley Political Action Committee, which under his leadership was the largest local pro-Israel PAC in the United States. Mendy was appointed by President Clinton to serve as a commissioner on the U.S. Commission for the Preservation of Americas Heritage Abroad. He has also served on many boards of non-profit organizations, including: AIPAC and the Governing Board of the Jewish Agency. Mendy is the author of numerous books including his most recent novel: The Five Day War, discussing an unusual alliance between Israel and the Sunni world. His book is available for purchase on Amazon: https://www.amazon.com/Five-Day-Mendy-Ganchrow-M-D-ebook/dp/B075JSL6L5/
Related Topics
Related Posts
Comments
Advertisement