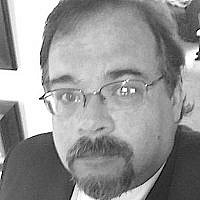 The Blogs
Mitchell Plitnick
Apply for a Blog
Please note that the posts on The Blogs are contributed by third parties. The opinions, facts and any media content in them are presented solely by the authors, and neither The Times of Israel nor its partners assume any responsibility for them. Please contact us in case of abuse. In case of abuse,
Report this post.

There’s a lot of debate going around about whether US President Donald Trump is an anti-Semite. The debate is one which Trump has done all he can to spark and sustain. It is also one that asks entirely the wrong question.

It doesn’t matter if Donald Trump is an anti-Semite. But two things about this issue matter very much. How does his presidency affect anti-Semitism in the United States? And why are so many Orthodox and right wing Jews so willing to ignore the troubling words and actions from Trump and his administration?

What is in Donald Trump’s heart and mind is of no consequence. All that matters is what he says and does. He has, from the time he started making his run at the Republican nomination for the presidency, consistently refused to distance himself from racist, anti-Semitic supporters. More importantly, he has acted in a manner consistent with one who recognizes that anti-Semites constitute a base of support for him that he does not wish to alienate.

Those actions are all that matter. What matters is that he tried to divorce the Holocaust from the Jewish people, who were the primary targets for genocide, and then doubled down on that action by justifying it. What matters is that he has repeatedly used phrases and symbols that read like classic anti-Semitic code and has refused to apologize or show any concern for the damage that such things might cause. What matters is that dozens of bomb threats have been made to Jewish community buildings across the country and he has uttered not a single word of condemnation of these acts.

Those are the things that matter. Whether Trump is acting this way for political reasons, for stupid reasons, or because he really is anti-Semitic despite his Jewish son-in-law and converted daughter simply doesn’t matter. As President of the United States, all that matters is the effect he has, and that effect has been to fan the flames of anti-Semitism.

One can only imagine what the outcry would have looked like had Barack Obama behaved in such a manner. Imagine the outrage if Obama had told an orthodox Jewish reporter to “sit down” for asking what the President planned to do to address the wave of anti-Semitic threats.

But what do we get when Trump does it? The reporter, Jake Turx, who writes for an orthodox, right wing magazine called Ami, bends over backwards to make excuses for Trump. This came just a day after Israeli Prime Minister Benjamin Netanyahu threw himself into the line of fire after Trump steadfastly refused to denounce anti-Semitic attacks in the United States. It came just minutes after Trump’s friend and nominee for Ambassador to Israel, David Friedman, was forced to testify that he “regretted” the language he used, though very pointedly not the views he espoused, in recent months that included calling the ADL “morons” and J Street “kapos.”

Meanwhile, Ku Klux Klan and Nazi leaders were beside themselves with glee after Trump’s performances this week.

I get the Jewish right. I was raised in it. At the age of 11, I met Rabbi Meir Kahane at a friend’s house, and I wore a custom-made knitted kippah that had my name inside a ring of Jewish Defense League fists. This segment of the Jewish community, despite living in the Diaspora, identifies with the negation of the Diaspora that is a central plank in the platform of many, though not all, strains of Zionism. They see a militarily strong Israel as a goal unto itself, transcending ethical concerns of any kind and in stark contrast to the centuries of their view of the “Diaspora Jew” as weak and helpless. Even those within this community who hold relatively liberal views on many issues, can be extremely illiberal when it comes to Israel, a schizophrenia that is so deep it is almost never even noticed.

We’ve seen this often enough in the past, in the ease with which these same segments of the Jewish community have easily slipped into alliance with Dispensationalist Christians who believe they are working to promote conflict in the Middle East to herald Armageddon, where Jews would either perish or be converted.

And so, today, we have the appalling spectacle of the Israeli Prime Minister warmly embracing a man who has acted, without doubt, in an anti-Semitic fashion. In part, he can get away with it because people are debating whether Donald Trump, with his obvious connections to the most right wing parts of the Jewish community can possibly be an anti-Semite.

It doesn’t matter if he is or is not. What matters is this: omitting any reference to Jews or anti-Semitism on Holocaust Remembrance Day is anti-Semitic; refusing to denounce acts of anti-Semitism being committed in your name, and for which you are being praised, is anti-Semitic; getting indignant when a Jew asks, in a manner clearly designed to give you an opening to address these issues, what you plan to do about rising anti-Semitism is anti-Semitic.

That’s what matters, and that’s what we are now dealing with from the White House. For now, the farthest right wings of the Jewish community are holding out hope that Trump will permit a final Israeli conquest of the Palestinians and annexation of the West Bank and East Jerusalem. But they are already being disappointed, with Trump’s walkback of his promise to move the American embassy from Tel Aviv to Jerusalem, and his more careful language about settlements.

The right is in for a bigger disappointment than that, however. Jewish history teaches us that the world is not kind to those of us who believe they can make gains by making common cause with anti-Semitic forces. Trump has already hinted at what fool’s gold this is, by his dressing down of the Ami reporter and his inability to recall the name of the Israeli Prime Minister who had just covered for the President’s anti-Semitic actions the day before. “Betinyahu,” who has so far distinguished himself as Trump’s lone and best cheerleader (Trump is still waiting for Vladimir Putin to speak as kindly about him as he has about the Russian President), certainly must have been disappointed.

So too will all those Jews who think Trump’s actions are going to benefit them. The important question is not whether Trump is an anti-Semite in his heart, but how high a price Jews, in the United States, Israel and all over the world, are going to pay for his anti-Semitic actions.

About the Author
Mitchell Plitnick is the former vice president of the Foundation for Middle East Peace. Previously, he was Director of the US Office of B’Tselem: The Israeli Information Center for Human Rights in the Occupied Territories (2008-2010) and Director of Education and Policy for Jewish Voice for Peace (2002-2008). His writing has appeared in Ha’aretz, the New Republic, the Jordan Times, Middle East Report, the San Francisco Chronicle, +972 Magazine, Outlook, and other outlets. He was a columnist for Tikkun Magazine, Zeek Magazine and Souciant. He has spoken all over the country on Middle East politics, and has regularly offered commentary in a wide range of radio and television outlets including PBS News Hour, the O’Reilly Factor and CNBC Asia. He received a Masters Degree in Public Policy from the University of Maryland, College Park and a B.A. in Middle Eastern Studies from the University of California, Berkeley.
Related Topics
Related Posts
Comments